This is a legacy representation of this AOP. Please see the current version here:

Please follow the link to snapshots page to view and create Snapshots of this AOP.

Under development: Do not distribute or cite.

Pulmonary irritation can be divided into two different types on the basis of biological events responsible (Bos et al., 2002). One type is irritation and inflammation caused by corrosive tissue destruction that is measured by skin and eye corrosive tests; and appears to be limited to few inhalable chemicals. The second type of irritation, called sensory irritation, is mediated by specific receptors located in the trigeminal nerve endings and likely to occur at concentrations lower than needed for tissue destruction. A large number of inhalable chemicals appear to be sensory irritants (Alarie et al 1966, 1973, Schaper et al., 1993). The focus of this investigation is to develop an adverse outcome pathway (AOP) for sensory irritants. The target organ of respiratory irritants is ultimately the airways where they may cause tracheitis or inflammation of the trachea, bronchitis, and bronchiolitis. Innate defense mechanisms to respiratory irritants include glandular secretions from nasal hair, skin, and mucous membranes . These pulmonary secretions contain enzymes that can produce less toxic products, antioxidants, buffers and other chemicals that help to protect the respiratory system.

Exposure to airborne pollutants can cause a number of harmful effects including irritation. Airborne pollutants are typically associated with industrial activities, cigarette smoke and automobile exhaust. However, inhalation exposure to irritant gases and vapors frequently occurs in occupational and ambient environments. Each year new and untested inhalable chemicals are added to the environment and the lack of appropriate toxic information may result in an underestimation of occupation risks due to exposure of airborne irritants. Assays or tests are needed to first determine and then characterize the potential irritant respiratory response of uncharacterized current and newly added volatile chemicals. To develop suitable assays it is necessary to understand the fundamental biochemical and physiology processes initiating the development and progression of irritation. The presented AOP is focused on the critical biochemical event, the activation of the TRP receptors, then describing the subsequent biochemical processes and pathways and how they interact with each other resulting in pulmonary irritation.

Please follow link to widget page to edit this section.

If you manually enter text in this section, it will get automatically altered or deleted in subsequent edits using the widgets.

Relationships Among Key Events and the Adverse Outcome 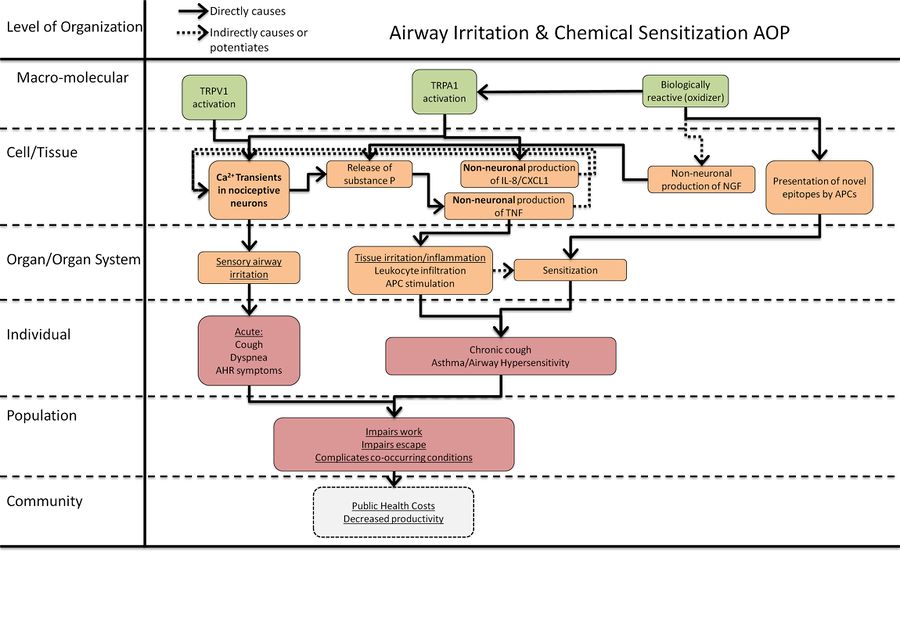 Life Stage Applicability: Exposure to toxic gases and vapor and in particular reactive chemicals activate TRPV1, ASICs and TRPA1 and induce neurogenic inflammation and pain and coughing responses. The activation of TRPA1 and TRPV1 also stimulates the release of inflammatory peptide SP, NKA and CGRP, which play a role in the asthmatic and irritation symptoms, observed after one-time and (Caceres et al., 2009) frequent exposure to inhaled irritants. These receptors may become hyper sensitized leading to chronic airway inflammation and cough. Exposure to high levels of TRPA1 agonists can induce reactive airway dysfunction syndrome or RADS, characterized by asthma like symptoms (Brooks et al., 1985). Bessac and Jordt (2008) proposed that exposure to an irritant and hence activation of TRPA1 may sensitize TRPA1 through inflammatory pathways and thereby establishing a hypersensitivity to other reactive irritants. TRPA1 but not TRPV1 appear to play an important role in allergic airway inflammation and hyper-reactivity associated with asthma. In a mouse model of asthma, the ovalbumin challenged mouse, ovalbumin induces a Th2 directed allergic response that included increase in leukocyte in the bronchoalveolar lavage fluid, increases in inflammatory cytokines and increase mucus production. In TRPA1 (-/-) mice, however these responses to ovalbumin were significantly reduced. Treatment of mice with a tear gas and TRPA1 agonist increased CGRP, SP and neurokinin A in wild type mice with greatly reduced levels in the TRPA1 (-/-) mice appearing in the alveolar fluid. Likewise treatment of wild type mice with ovalbumin also increase increased with level of neurokinin A with a diminished level in the TRPA1 (-/-) mice. These results indicate TRPA1 has a critical role in the development of asthma after allergen challenge (Caceres et al., 2009

Taxonomic Applicability,: The data used to support the KERs in this AOP derives from experimental studies conducted in rats, knockout mice or cell cultures from fibroblasts, ovary epithelium. TRP channels are present in primary sensory neruons, and also non-nueuronal tissues including epithelium, fibroblasts, and smooth muscle (Kissin, 2008). The majority of the KEs in this AOP seem to be highly conserved across species. It is unclear if these KERs of the present AOP are also applicable for other species rather than human, primates, rats and mice.

Sex Applicability: There is definitely potential for sex applicability to play a role in airway irritation and chemical sensitization. It has been demonstrated that TRP channels in sensory neurons are regulated by prolactin, in a sex-dependent manner. Prolactin plays a role in the sensitization of TRP channels and may promote antinocioceeptive effects (Patel, et al., 2013).In female mice dorsal root ganglia neurons, TRPV1 activity was enhanced with prolactin at 10-25 ng/ml whereas male mice required >0.8-1 mcg/ml PRL. ASICs activity has also been shown to be upregulated by prolactin in female rats (Li et al., 2016). </em>

The critical importance of the activation of TRPA1 receptor in the pulmonary response to irritants is strongly supported by the results of studies (Bautista et.al., 2006; Caceres et al., 2009) with mice deficient in TRPA1 (TRPA1-/- mice). The TRPA1 -/- mice have significant lower decrease in the respiration rate and symptoms of irritation after exposure to inhalable irritants than wild type mice. Many electrophiles and oxidants are very potent irritants and covalently link to and modify and thus activate the critical receptor(s) that initiate the irritation response (Bessac and Jordt, 2010, Bautista et al., 2013). Some members of this reactive group are isocyanates, α, β-unsaturated aldehydes, heavy metals and peroxides.

The trigeminal chemosensory nerve endings in the nasal mucosa and airway are a first line of defense against irritant chemicals. In these nerve endings are TRP calcium ion channels, TRPV1 and TRPA1, with TRPA1 act as major sensor to noxious chemicals. Irritants, electrophiles oxidants as well as endogenous chemicals, activate TRPA1 causing an influx of Ca+2 into the nerve. This result in excitation of the trigeminal nerves and the initiation of airway reflex responses coughing, sneezing and pain. A clear time dependent relationship between the activation of the receptor and Ca ion flux and the biological effects (Bessac et aal., 2008).

The reactive irritants like the isothiocyanates form adducts with thiol residues present in the receptor active site causing prolonged nerve activation (Hinman et al., 2006; Peterlin et al., 2007; Macpherson et al., 2007). The activation of TRPA1 with electrophilic irritants result in the covalently binding of the chemicals to cysteine and lysine residues of TRPA1 forming a “foreign protein” or hapten leading sensitization and enhanced responses to subsequent exposure to the irritant (Vandebriel et al., 2011).

The cellular responses include excitation of the trigeminal nerves causes the release of neuropeptides substance P, NK and CGRP that promote neurogenic inflammation, vasodilation, and fluid leakage. Substance P and NK bind to NK receptors that are expressed in the plasma membrane of cell bodies and dendrites of neurons.

As the irritant reach the lower airways the sensory nerve activation causing the following organ response or pulmonary responses: bronchial constriction spams and increased mucus production and further neurogenic inflammation. Increased eosinophils and T helper cells and the associated inflammatory cytokines (IL-2, Il-4, IL-10, Il-13) are observed (Caceres et al., 2009; Belvisi et al., 2011). Trigeminal activation also results in a vagal response that slows the respiration rate, which is the basis for the use of RD50, or the irritant concentration that induces a 50% decrease in respiration rates in mice (Alarie, 1981).

Exposure to irritants the activation of TRPA1 couples with its interaction with TRPV1 can eventually lead to the following organism responses or clinical manifestations: chronic cough, pain, airway inflammation, COPD and asthmatic like conditions (Bessac and Jordt, 2008, Chen and Haclos, 2015, Baraldi et al., 2010.)

Summary Table
1. Concordance of dose-response relationships Strong in vitro dose response relationships for the activation of TRPA1 by known irritants are published in the literature. In general, a good correlation exists between the potency as measure in vitro and the irritation observed mice in as measure by the Alarie test for sensory irritation.

2. Temporal concordance among the key events and adverse effect; There is good agreement between the sequences of biochemical and physiological events leading to pulmonary irritation ( Bassec and Jordt 2009, Bessac and Jordt, 2010, Baustista et al, 2006).

3. Strength, consistency, and specificity of association of adverse effect and initiating event There is excellent strength, as well as good consistency and high specificity, of the association between the activation of TRP receptors and irritation. The critical importance of the activation of TRPA1 receptor in the pulmonary responses to irritants is strongly supported by the results of studies with mice deficient in TRPA1 (TRPA1-/- mice) (Bautista et.al., 2006; Caceres et al., 2009).

4. Biological plausibility, coherence, and consistency of the experimental evidence The in vitro, and in vivo experimental evidence is logical and consistent with the hypothesis that the activation of the TRP receptors, in particular, the activation of TRPA1 is the key initiation event in pulmonary irritation (Bautista et al 2013, Bessac and Jirdt, 2009).

5. Uncertainties, inconsistencies, and data gaps. A database containing more than 350 RD50 values that is a measure of irritation in vivo obtained from experimental animals is available (Schaper 1993) but only a few of these irritants has been tested in in vitro assays to directly measure the activation of TRPA1 (Bessac and Jordt, 2010; Bos et al., 2002, Lehmann 2016). A real gap in the information of irritation and activation by TRPA1 is the lack of potency data on the activation of TRPA1 by known irritants.

The AOP would be enhanced by the addition of results confirming the activation of TRPA1 by the chemicals established as irritants with reported RD50. This information would confirm what irritants and their toxicity is mediate by these biochemical processes initiated by TRPA1 activation. If a significant number of these irritants are not activators of TRP receptors, it would stimulate the search for additional biochemical mechanisms for irritants. Furthermore the additional data would permit a comparison of the RD50 and EC50 . This comparison may allow a determination if an in vitro assay for TRP activation using, for example, fibroblasts can be used determine if an uncharacterized chemical is potential chemical irritant and if the values are useful in setting exposure limits.