From AOP-Wiki
Jump to: navigation, search
DNA alkylation in spermatogonia

Despite major advances in human genomics, the chemical and physical agents that influence inherited mutation rates are not well understood, and existing OECD guidelines to assess the effects of chemicals on inherited mutations are outdated and rarely used (Singer and Yauk 2010; Yauk et al. 2012). Overall, less than 50 toxicants have been examined for germ cell or inherited mutagenicity using assays with OECD guidelines (Demarini 2012). Over 30 of these agents have been identified as male germ cell mutagens. Thus, there is unequivocal evidence that various chemical agents cause inherited mutations in animal models, and strong support that these effects also occur in humans (Demarini 2012). In addition, new assays and technologies are emerging that will facilitate germ cell mutation testing. Attention is required to ensure that optimal strategies are designed for the application of these new approaches and for the appropriate interpretation of the results produced (Demarini 2012; Singer and Yauk 2010; Verhofstad et al. 2008; Yauk et al. 2012). This has been the recent focus of a working group at the International Workshop on Genotoxicology Testing (IWGT: Brazil, November, 2013) and the participants widely recommended improvements in existing assays and additional assays for this field (Yauk et al., in preparation). The need for new assays and additional research to address data gaps in this area is an underlying motivation for the development of this AOP.

The present AOP focuses on DNA alkylation in spermatogonia that causes inherited mutation transmitted via sperm, arguably one of the most well characterized modes of action in genetic toxicology. Because inherited mutations are so infrequent (~ 1 in 10E8 nucleotides per generation) (Conrad et al. 2011; Kong et al. 2012; Roach et al. 2010), studies in human populations are exceedingly difficult. Therefore, the majority of evidence for chemicals operating as germ cell mutagens is in animal models, although support that this AOP occurs in humans is available for some key events. For example, evidence suggests a 95% concordance in the induction of unscheduled DNA synthesis (UDS) in the testes of humans, rabbits, rats, and mice following exposure to various chemicals, X-rays and UV light (Sotomayor and Sega 2000). UDS indicates that DNA lesions have occurred and that the germ cells are presumably attempting to repair the induced damage, suggesting that response to mutagenic agents across these species is similar. It is also important to note that the process of spermatogenesis is highly conserved across vertebrate taxa. For example, the similarity in rodent and human spermatogenesis is depicted in Figure 1, demonstrating the relevance of this AOP across these species. 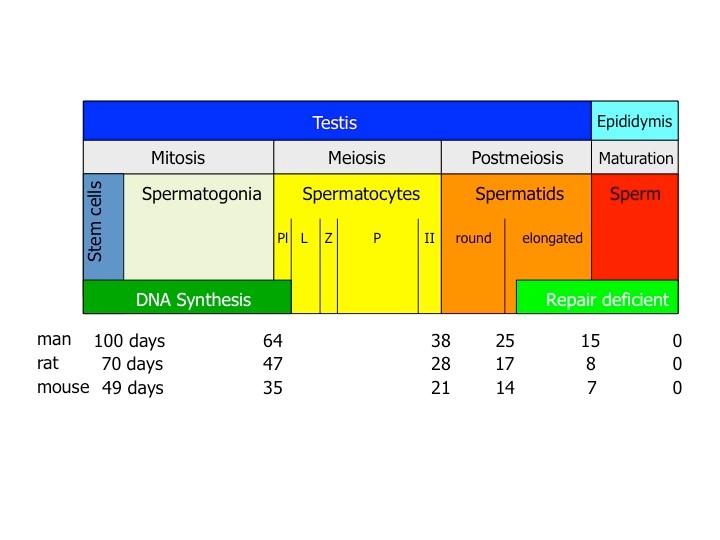 Spermatogenesis is initiated at puberty and continues throughout a male’s lifetime. Once spermatogonial stem cells (which are undergoing mitosis every ~8 days in the mouse) are committed to becoming differentiating spermatogonia, they undergo a series of mitotic divisions before entering meiosis, which is then followed by a series of morphological transformations to produce mature, haploid, motile spermatozoa (Clermont 1972). These morphological changes occur as a wave from the outer germinal epithelial cells of the seminiferous tubules, leading eventually to translocation and release of spermatozoa into the lumen of the tubules, where they are transported to the caudal epididymus to await ejaculation via the vas deferens. In the latter phase of spermatogenesis, histones are replaced by protamines (a unique feature of the male germ cells) and the late spermatid/spermatozoa stages become DNA-repair deficient (Marchetti and Wyrobek 2005; Olsen et al. 2005). Thus, DNA damage incurred during these later phases of spermatogenesis can only be repaired using DNA repair machinery provided from the egg post-fertilization (Marchetti et al. 2007). Therefore, although alkylation of DNA can occur in these germ cell types, the processes that govern the formation of mutations and their inheritance in the offspring are fundamentally different from those arising in spermatogonia, and thus will be dealt with in a separate AOP.

Exposure to toxic substances can lead to a spectrum of adverse effects that can impact the exposed male germline, including decreased fertility or infertility, sperm chromatin fragmentation, chromosomal aberrations and aneuploidy, translocations, changes in motility or morphology, among a host of other effects (Marchetti and Wyrobek 2005; Martenies and Perry 2013; Oliva et al. 2001). Although many mutagens that affect the germline would also be somatic cell mutagens (and thus potentially contribute to other somatic cell diseases such as cancer), there are numerous unique features of the germline that suggest that these cells should be evaluated separately. Of all the cells in the body, sperm and egg are the only two cell types that undergo meiosis, as well as prolonged, compartmentalized, and highly unique phases of development and differentiation. In addition, they have unique epigenetic features that are dynamic throughout their development (Sasaki and Matsui 2008; Smallwood et al. 2011). Thus, there may be specific germ cell types that are particularly sensitive to mutagen exposure. Indeed, evidence is emerging that some chemical mutagens may specifically, or preferentially, target the male germline, though this has yet to be rigorously tested (Marchetti et al. 2011; Singer and Yauk 2010).

The present AOP describes alkylating DNA damage to differentiating spermatogonia and spermatogonial stem cells. These spermatogenic cells types are diploid and DNA-repair proficient. Mutations arising in mitotically replicating spermatogonial stem cells are of the most concern, as these can persist and accumulate in the adult male. For example, as described above, recent evidence indicates that the average human male accumulates and passes on two new mutations for every year of his reproductive life (Kong et al. 2012).

The presence of mutations in sperm and offspring following ENU exposures has been clearly documented using different assays. Indeed, ENU has been used for decades to generate germ cell mutations to be used for genetic screening. Thus, the association between specific alkyl adducts and germ cell/heritable mutations is extremely well-established.

As mentioned above, one motivation for developing this AOP is to address the current needs for improved testing in the field of germ cell mutagenesis. The recent release of the transgenic rodent mutation assay (TG 488) addresses this gap and is expected to be used more frequently in the future. In addition, new approaches that apply advanced sequencing technologies are expected to more fully assess the impact of environmental agents on induced heritable mutations and population health in the future. Finally, the lack of effective in high throughput mutation detection strategies, especially for germ cells, is a critical gap in this field. It is hoped that this AOP will provide a motivation to promote further research to address this gap, and serve as a basis to develop improved modelling approaches to predict whether a chemical agent is able to penetrate the testes and germ cells, alkylate DNA and cause heritable mutations.