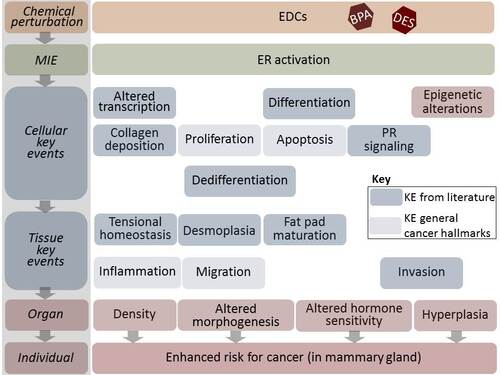 The industrial estrogen, bisphenol A (BPA) is one of the most data-rich chemicals related to breast cancer and altered mammary gland development [11]. As such, studies in model rodent strains following gestational EDC exposure to bisphenol A (BPA) or DES provide experimental support for this AOP and human-relevance. A thorough search of the literature yielded experimental evidence for this AOP as directed by a mix of natural and MeSH term search logic specifying rodents and non-human primates (population); human-relevant, in utero exposure to BPA or DES (exposure); and mammary gland AOs (outcome) [27-32] (see PECO statement, Table 1 below). Most studies investigating EDC-effects on mammary development heavily describe altered growth and structure, resulting in limited mechanistic understanding. This AOP integrates knowledge and tools from investigations of established breast cancer risk factors such as density and obesity to enhance understanding of the molecular- and cellular-driven etiologies of altered mammary structure and growth. Integrating this knowledge promotes the development of in vitro assays capable of predicting high-risk phenotypes and offers efficient alternatives to in vivo mammary gland evaluation. Ultimately, making these links in the knowledge base will improve screening to identify chemicals that act on gestational development and will more specifically target chemical contributions to later-life breast cancer risk in toxicity testing. Productive intermediate testing endpoints would follow ER-binding, -activation and steroidogenesis (OECD TG-455; EDSP TG-890[33, 34]), precede carcinogenicity (OECD TG-451, and -453) and connect these with EDC-effects on breast cancer due to prenatal exposure (OECD TG-414, -415, -416, -422, -443). This AOP will also describe ‘missed opportunities’ in the existing evidence; not reporting or measuring traditional toxicity testing endpoints, like uterine weight and body weight alongside more sensitive mammary gland growth and structural changes. Failure to do this in parallel within the same study undermines the sensitivity of these endpoints to predict later-life breast cancer risk.

Table 1. PECO statement [27, 28].  A statement of the Population, Exposure, Comparators and Outcomes was prepared to direct objective experimental study collection for this AOP synthesis on breast cancer risk from early-life EDC exposure. The Organization for Economic Co-operation and Development does not cite systematic review methods or objective identification of included evidence in its guidance for AOP development. A narrowed survey of review articles in PubMed, published after 2006 and until November 2018, was performed to assess the state of mechanistic evidence connecting EDC exposure to breast cancer risk and altered mammary gland growth and structure. This step assisted problem formulation by situating human-relevant EDC exposures in the hallmarks of cancer via ‘important reviews.’ There were no systematic reviews. This initial survey of the review literature assisted search logic development and supported an initial sketch of the AOP.

Breast cancer risk background: Breast cancer is a significant health concern as the second leading cause of death in women [1]. Only 5-10% of breast cancers are attributable to genetic predisposition and substantial evidence indicates many lifestyle and environmental factors contribute to lifetime risk [2-5]. Early-life developmental disruption by hormone-like, or endocrine disrupting chemicals (EDCs), heightens age-related breast cancer risk. A human model of this disruption emerges from the treatment of pregnant women with synthetic estrogen, diethylstilbestrol (DES), beginning in the 1940’s with the intent to prevent miscarriages. This practice ceased when women exposed in gestation – “DES Daughters” – had a 40x increased incidence of cervical and vaginal cancers [6, 7], highlighting in utero development as a critical window of exposure. The later finding that “DES Daughters” also had a 2-fold increased incidence of breast cancer only detected in women ≥30 years post-exposure, underscores the latency of this disruption in causing disease [7-9]. Studies of the reproductive tract and mammary gland of rodent models have recapitulated these increased risks [10-12]. While synthetic estrogens are no longer prescribed to pregnant women, human biomonitoring data show widespread exposure to EDCs that include weak estrogens [13, 14] and their ability to cross the placental barrier [14-18]. Many EDCs are present at human-relevant exposures in the environment, but these chemicals can act together on the same adverse health outcomes [19], including estrogen action as a relevant target for breast cancer [20-23]. Taken together, this evidence raises concerns that early-life EDC exposure enhances later-life breast cancer risk.