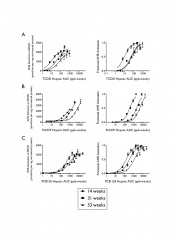 Figure 2: Dose-response of CYP1A1 activation measured by EROD as a measure of AHR activation in response to an AUC measure of dose. The AUC is the hepatic concentration multiplied by the time in weeks. The left hand plots show measured EROD from the NTP bioassays in response to chronic dosing of TCDD (top), 4-PeCDF (middle) or PCB-126 (bottom) (NTP, 2006a, 2006b, 2006c). Dose-dependent EROD levels are sustained over time. The right hand plots show the EROD response on normalized to a zero-to-one scale as a measure of AHR activation level.

shows plots of the increase in 7-Ethoxyresorufin-O-deethylase (EROD) versus the area-under-the-curve (AUC) of the hepatic concentration of three dioxin-like chemicals, TCDD, 4-PeCDF and PCB-126 occurring during lifetime dosing. The figure shows corresponding plots of normalized EROD as a measure of AHR activation. In all three cases, the shape of the dose-response remained consistent except that the position along the dose axis increased with increasing time for all three chemicals. This observation indicates that the level of AHR activation remains relatively constant over time with a continuing dose of persistent AHR ligand. A measure of sustained activation (SA) of the AHR can be calculated by multiplying the level of AHR activation observed as fractional CYP1A1 induction by the number of weeks of dosing. SA calculated in this way can be used as a dose surrogate. In order to use the measurements of all three DLCs considered here, their hepatic AUC concentrations were multiplied by their toxic equivalence factors (TEFs) (Van den Berg et al., 2006). SA was plotted against the AUC of hepatic TEQ concentration (Figure 3).

Figure 3: Sustained AHR activation versus the area-under-the-curve of hepatic TEQ. TEQ was calculated for TCDD, PeCDF and PCB126 using TEF values of 1, 0.3 and 0.1 respectively. Data from all three chemicals at 14 weeks are shown with blue markers, those from 31 weeks with green markers and those from 53 weeks with orange markers. Please see narrative for additional details.

The plot shows a consistent pattern that can be fit with a Hill function. The curve is shallower than a first-order Hill plot shown by the Hill coefficient less than one. This shallowness may be due to differences in potency and efficacy at different times, possibly stemming from hepatic sequestration of ligand by CYP1A2, especially for PeCDF, thus decreasing the effective hepatic concentration relative to the measured concentration.


Evidence for Perturbation by Stressor