Formation of the pro-mutagenic DNA adduct, N7-AFB1-G (or its conversion product, N7-AFB1-FAPy) is the first step in the initiation of a process that may finish in development of altered

While there is no specific information for AFB1, it is widely recognized that pro-mutagenic adducts formed by AFB1 metabolites may be repaired/removed or may result in mutations. The fidelity of the repair processes and probability of mis-repair determine whether mutations arise in tumor-critical genes. The altered hepatic foci (AHF) are believed to result from mutations expressed in cells that demonstrate reduced apoptosis and increased proliferation, likely linked to the mutations. (Alekseyev et al., 2004; Zhang et al., 2003; Giri et al., 2002; Bailey et al., 1996; Lin et al., 2014).

The plethora of published chemoprevention studies support a relationship between AFB1-induced DNA adducts and altered hepatic foci (AHF). There are some evaluations that claim (Bechtel et al. 1989) linearity in the dose-response for adduct formation as a function of dose in both rats and trout; but linearity does not seem to apply, however, for adducts and AHF. Recent work of Johnson et al. (2014) showed that AHF were reduced to background levels by the chemoprotectant CDDO-Im, while around 30% of the original level of N7-AFB1-G adducts were still present. These authors note that there remained ~15,000 adducts per cell after application of the chemoprotectant, while AHF are at background levels, and no HCC tumors were induced.

It is clear that the dose-response relationship between adducts and AHF is disproportionate, and thus likely not linear, given that a ~30% reduction in adducts resulted in a 100% reduction in AHF (Johnson et al., 2014). However, a quantitative prediction from DNA adducts to AHF cannot be determined due to lack of data.

There is a study which includes a comparison of AFB1 adduct formation in animals co-administered chemopreventive agent (CDDO-Im) and AHF data (Johnson et al., 2014); these data were developed in rats following 28 d of exposure to AFB1 (young adult rats). Control data for AHF in rats from standard cancer bioassays—thus 18- to 24-month old rats—was analyzed and back-extrapolated in age to determine whether the background level of AHF in the young adult CDD)-Im treated rats was reasonable. Below is provided an analysis of background AHF formation for the placental form of glutathione-S-transferase (GSTP+) foci for use in comparisons of chemoprevention studies with background.

To compare the occurrence of GSTP+ AHF in rats treated with AFB1 and AFB1 + CDDO-Im with controls, a modelled fit of the growth of volume fraction of AHF was developed from data in Popp et al. [9]. Most of the data on AHF in control rats were developed by histological identification of foci rather than enzymatic identification (Harada et al., 1990; Bannash et al., 1985).

One drawback to all these papers on AHF is that parameters for AHF were determined late in the lifetimes of the rats; by contrast, Johnson et al. (2014) examined AHF for up to 28 days of AFB1 administration, a much shorter treatment time and in young adult rats. In addition, many papers used strains and sexes other than F344 males. The use of the same strain and sex in Popp et al. (1985) was considered important for developing the comparison. 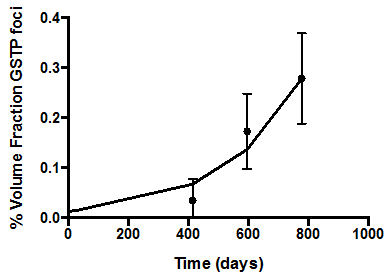 Data from Johnson et al. (2014) at three time points following the onset of treatment (either AFB1 or AFB1 + CDDO-Im) are shown in comparison to the early extrapolation of occurrence of GSTP+ AHF in control rats.

Figure 2. Plot of the occurrence of GSTP+ AHF in male F344 rats from Johnson et al. (2014) (labeled points with error bars, AFB1 and AFB1 + CDDO-Im) and the early time extrapolated fit (solid line) of the data from Popp et al. (1985). The AFB1 data were so much greater than the other data that a split y-axis was needed.

The extrapolation of the data in Popp et al. (1985) from long exposure times to short exposure times represented an uncertainty. Hence, data from Harada et al., (1989) [13] were also examined. These data did not include GSTP+ foci but rather histologically identified foci (e.g., basophilic, eosinophilic, mixed). Data were obtained at 6, 9, 12, 15, 18, and 24 months. These data were also fit to the MVK equation from Dragan et al., (1995) (not shown). When extrapolated to times less than 28 days, these data from Harada et al. (1989) were very similar to those from Popp et al. (1985).

The universality of both DNA adducts and AHF in the pathogenesis of liver cancer suggests that the wide taxonomic applicability noted elsewhere in this AOP is likely true for this KER.