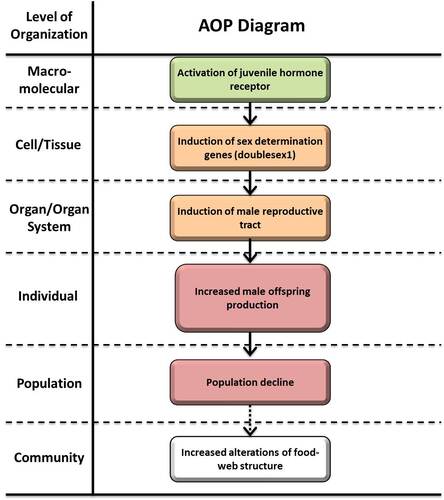 You Song1 and Knut Erik Tollefsen1,2

Endocrine disruption (ED) associated with environmental sex determination (ESD) and reproduction effects has been frequently reported in various ecotoxicologcail studies with crustaceans, such as daphniids (reviewed in (LeBlanc and Medlock, 2015)). Daphniids normally go through parthenogenic reproduction cycles in which only female offspring are produced. When under environmental stress (e.g. chemical exposure, short length of daylight, food shortage and high population density), a switch of reproductive strategy from asexual to sexual reproduction occurs and male offspring are produced. As an indicator of ED, the induction of male offspring is used as an important endpoint in daphnia toxicity tests. It has been widely recognized that analogs of the crustacean juvenile hormone (JH), methyl farnesoate (MF) are able to bind and activate the crustacean JH receptor, methoprene tolerant (Met), thus inducing the putative sex determination genes, doublesex genes, and causing male offspring formation. The induction of male neonates is usually associated with reduced fecundity and population decline as adverse ED effects. The existing evidences from different studies currently support the causal relationships between the biological events occurred in daphniids after exposure to JH analogs and subsequently form an adverse outcome pathway (AOP) as proposed herein.

Taxonomic Applicability This AOP can be potentially applied to other crustacean species and insects. The ligand binding domain of Met is considered to be conserved across different daphnia species and insects (Miyakawa et al., 2013). The juvenile hormone III (methyl farnesoate) signaling pathway to exert hormonal actions are thought to be similar between daphnids and insects with only two amino acids being different, which enhances the responsiveness of the Met receptor to various juvenile hormone III analogs (Miyakawa et al., 2013).

Elaborate on the domains of applicability listed in the summary section above. Specifically, provide the literature supporting, or excluding, certain domains.

The support for essentiality for MiE is considered to be strong. It has been shown that MF and the MF analog pyriproxyfen activated the cloned Daphnia pulex Met when expressed with the mosquito SRC ortholog (LeBlanc et al., 2013). A two-hybrid in vitro screening bioassay has been developed using transfected Chinese hamster ovary (CHO) cells containing the transcriptional activity of Met/SRC for screening of Met activation by MF analogs (Miyakawa et al., 2013). The application of this screening assay by different studies supported that chemical with MF activities, including MF, juvenile hormone III, fenoxycarb (Miyakawa et al., 2013) and diofenolan (Abe et al., 2015a) were able to activate the Met receptor and initiate downstream transcriptional regulation in a concentration-dependent manner. Evidences generated from this screening assay quantitatively demonstrated the causal relationship between chemical exposure and transcriptional activation of Met.

Key Event Summary
The dsx1 gene has shown to be highly responsible for the regulation of male traits development in the embryos of D. magna after exposure to the MF analog fenoxycarb (Kato et al., 2011). The same study has also shown that lack of dsx1 gene expression in male embryos of D. magna resulted in all female phenotypes. A high number of studies have quantitatively assessed the effects of MF-like chemicals on the induction of male offspring in daphnids (Abe et al., 2015b; Abe et al., 2014b; Ginjupalli and Baldwin, 2013; Kim et al., 2011; Lampert et al., 2012; Matsumoto et al., 2008; Oda et al., 2007; Oda et al., 2005; Olmstead and LeBlanc, 2001a, 2003; Olmstead and LeBlanc, 2001b; Tatarazako et al., 2003; Wang et al., 2005). These studies strongly support the induction of male offspring as a results of MF-related ED effects. Therefore, it is evident that the support for essentiality of Met receptor activation by MF analogs leading to the induction of dsx1, male traits and male offspring is strong.

Provide an overall assessment of the essentiality for the key events in the AOP. Support calls for individual key events can be included in the molecular initiating event, key event, and adverse outcome tables above.

Summary Table
The overall weight of evidence (WoE) for this AOP is considered to be moderate. The WoE for each individual KER is summarized in the overview table above. The MiE of Met receptor activation leading to the induction of dsx1 gene is considered to be strong. It has been demonstrated in insects such as Drosophila that the direct target gene following the MF receptor activation was the sex lethal gene (sxl) (Zhang et al., 2014). The sxl protein as an RNA splicing factor then leads to the expression of the transformer (TRA) gene and protein to regulate the doublesex (dsx) genes (Kopp, 2012). However, studies have shown that the tra gene was not involved in the sex determination in daphnids (Kato et al., 2010). Therefore, intermediate targets between the Met receptor activation and the induction of dsx genes still need to be found. Nevertheless, the dsx1 gene has shown to be highly responsible for the regulation of male traits development in the embryos of D. magna after exposure to the MF analog fenoxycarb (Kato et al., 2011). The same study has also shown that lack of dsx1 gene expression in male embryos of D. magna resulted in all female phenotypes. Therefore, it is evident that the support for essentiality of Met receptor activation by MF analogs leading to the induction of dsx1 and male traits formation is strong. The induction of dsx1 genes and male traits development leading to the induction of male offspring is considered to be strong. A study by (Miyakawa et al., 2013) reported good correlation between the EC50s of male offspring induction and EC50s of Met receptor activation for MF-like chemicals, including MF, fenoxycarb, JH III and pyriproxyfen. The induction of male offspring leading to reduction of fecundity is considered to be moderate. A number of studies have shown that the reduction of fecundity often occurred with the increased male:female ratio of offspring in daphnia after exposure to MF analogs (Abe et al., 2015b; Abe et al., 2014b; Ginjupalli and Baldwin, 2013; Kim et al., 2011; Lampert et al., 2012; Matsumoto et al., 2008; Oda et al., 2007; Oda et al., 2005; Olmstead and LeBlanc, 2001a, 2003; Olmstead and LeBlanc, 2001b; Tatarazako et al., 2003; Wang et al., 2005). Although the underlying mechanism and quantitative causal relationship between male formation and reduced reproduction has not been well-characterized, these evidences support the hypothesis that reduction of fecundity may be caused by disrupted sex determination pathway. The reduction of fecundity and induction of male offspring leading to the decline of population size is considered to be weak. Although lack of direct experimental evidences, it may be deduced that the most efficient way of reproduction, parthenogenesis is disrupted, thus the population size in the next generations may decrease. The decline of population size leading to the disturbance of food-web structure is considered to be weak. Although lack of experimental evidences, it may deduced that the food-web structure may be disrupted due to the decline of daphnia population.

Provide an overall summary of the weight of evidence based on the evaluations of the individual linkages from the Key Event Relationship pages.

Provide an overall discussion of the quantitative information available for this AOP. Support calls for the individual relationships can be included in the Key Event Relationship table above.

Olmstead, A.W., LeBlanc, G.A., 2001a. Temporal and quantitative changes in sexual reproductive cycling of the cladoceran Daphnia magna by a juvenile hormone analog. The Journal of experimental zoology 290, 148-155.

Olmstead, A.W., LeBlanc, G.L., 2001b. Low exposure concentration effects of methoprene on endocrine-regulated processes in the crustacean Daphnia magna. Toxicological sciences : an official journal of the Society of Toxicology 62, 268-273.

Zhang, Z., Klein, J., Nei, M., 2014. Evolution of the sex-lethal gene in insects and origin of the sex-determination system in Drosophila. Journal of molecular evolution 78, 50-65.