To the extent possible under law, AOP-Wiki has waived all copyright and related or neighboring rights to KE:167

A descriptive phrase which defines a discrete biological change that can be measured. More help

The KE short name should be a reasonable abbreviation of the KE title and is used in labelling this object throughout the AOP-Wiki. More help
Activation, LXR
Explore in a Third Party Tool

Structured terms, selected from a drop-down menu, are used to identify the level of biological organization for each KE. More help

The KE, as defined by a set structured ontology terms consisting of a biological process, object, and action with each term originating from one of 14 biological ontologies (Ives, et al., 2017; https://aopwiki.org/info_pages/2/info_linked_pages/7#List). Biological process describes dynamics of the underlying biological system (e.g., receptor signalling).Biological process describes dynamics of the underlying biological system (e.g., receptor signaling).  The biological object is the subject of the perturbation (e.g., a specific biological receptor that is activated or inhibited). Action represents the direction of perturbation of this system (generally increased or decreased; e.g., ‘decreased’ in the case of a receptor that is inhibited to indicate a decrease in the signaling by that receptor).  Note that when editing Event Components, clicking an existing Event Component from the Suggestions menu will autopopulate these fields, along with their source ID and description.  To clear any fields before submitting the event component, use the 'Clear process,' 'Clear object,' or 'Clear action' buttons.  If a desired term does not exist, a new term request may be made via Term Requests.  Event components may not be edited; to edit an event component, remove the existing event component and create a new one using the terms that you wish to add.  Further information on Event Components and Biological Context may be viewed on the attached pdf. More help

Latin or common names of a species or broader taxonomic grouping (e.g., class, order, family) that help to define the biological applicability domain of the KE.In many cases, individual species identified in these structured fields will be those for which the strongest evidence used in constructing the AOP was available in relation to this KE. More help

An indication of the the relevant life stage(s) for this KE. More help

An indication of the the relevant sex for this KE. More help

Liver X receptors are ligand-activated transcription factors of the nuclear receptor superfamily first identified in 1994 in rat liver (Apfel et al. 1994, Song 1994). There are two LXR isoforms termed a and ß (NR1H3 and NR1H2) which upon activation form heterodimers with retinoid X receptor (RXR) and bind to the LXR response element found in the promoter region of the target genes (Baranowski 2008). LXRs were shown to function as sterol sensors protecting the cells from cholesterol overload by stimulating reverse cholesterol transport and activating its conversion to bile acids in the liver (Baranowski 2008).

LXRa expression is restricted to liver, kidney, intestine, fat tissue, macrophages, lung, and spleen and is highest in liver, hence the name liver X receptor a (LXRa). LXRβ is expressed in almost all tissues and organs, hence the early name UR (ubiquitous receptor) (Ory 2004). The different pattern of expression suggests that LXRa and LXRβ have different roles in regulating physiological function. This is also supported from the observation that LXRa deficient mice do not develop hepatic steatosis when treated with LXR agonist that activates both types (Lund et al. 2006) and consequently the role of the two isoforms in relation to adverse effects could be different.

Generally speaking chemicals that are able to act through NRs are usually specific ligands. These chemicals are mainly lipophilic and they mimic the action of natural hormones. However, in some cases hydrophilic chemicals (like phthalates) are also capable to act as ligands in NRs due to the molecular structure of the proteins and the pocket sites of the receptors.

The molecular initiating event in the presented MoA is the binding to the LXR or the permissive RXR of the LXR-RXR dimer leading to activation. LXR activation can be achieved via a wide range of endogenous neutral and acidic ligands as shown by crystallographic analysis (Williams et al. 2003). There are known endogenous but also synthetic ligands that can act as agonists. Endogenous agonists for this receptor are the oxysterols (oxidized cholesterol derivatives like 22(R)-hydroxycholesterol, 24(S)-hydroxycholesterol, 27-hydroxycholesterol, and cholestenoic acid) mainly with similar affinity for the two isoforms (Baranowski 2008). Oxysterols bind directly to the typical hydrophobic pocket in the C-terminal domain (Williams et al. 2003). Other endogenous ligands are the D-glucose and D-Glucose-6-phosphate (Mitro 2007). However, the hydrophilic nature of glucose and its low affinity for LXR present a challenge to the central dogma about the nature of the NR-ligand interaction (Lazar & Wilson 2007). Unsaturated fatty acids have also been shown to bind and regulate LXRa activity in cells. However, in contrast to the role of oxysterols, the biological relevance of this observation has not been established in vivo (Pawar et al. 2003). The function of LXRs is also modulated by many currently used drugs such as statins, fibrates, and thazolidinedione derivatives (Jamroz-Wiśniewska et al. 2007). Some synthetic LXR agonists have been developed like the non-steroidal agonists T0901317 and GW3965 (Schultz et al 2000, Collins et al. 2002). LXR forms a permissive dimer with the RXR which means that chemicals that can activate this receptor can trigger the same pathway as the LXR agonists. The endogenous RXR agonist is 9-cis-retinoic acid (Heyman et al. 1992) while synthetic agonists include LGD1069 and LG100268 (Boehm et al. 1994 and 1995).

In addition to the agonist binding in the LXR there are other mechanisms for its control. LXRa gene promoter contains also functional peroxisome proliferator response element (PPRE) and peroxisome proliferator-activated receptor (PPAR) a and γ agonists were shown to stimulate LXRa expression in human and rodent (Baranowski 2008). Control of the LXRa expression is also dependent on insulin and post-translationally by protein kinase A that phosphorylates receptor protein at two sites thereby impairing its dimerization and DNA-binding (Baranowski 2008).

Identification of the site of action

Nuclear receptors may be classified into two broad classes according to their sub-cellular distribution in the absence of ligand. Type I NRs (like ER and AhR) are located in the cytosol (and they are translocated into the nucleus after ligand binding) while type II NRs like LXRs (but also PXR, PPARa and PPARγ) are located in the nucleus of the cell.

The specific site of binding and the affinity of a ligand for the LXRs depend on the structure of the ligand.

Binding in the LXREs and target genes transcription 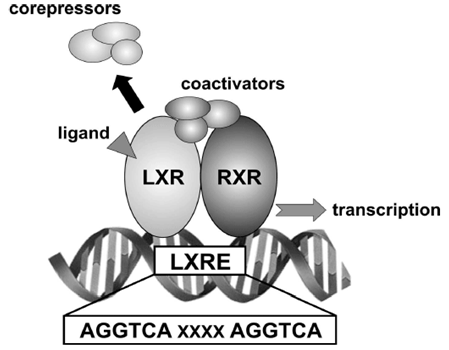 Target genes of LXRs are involved in cholesterol and lipid metabolism regulation ([1], [2]) including:

Auto-regulation of the LXRa

A description of the type(s) of measurements that can be employed to evaluate the KE and the relative level of scientific confidence in those measurements.These can range from citation of specific validated test guidelines, citation of specific methods published in the peer reviewed literature, or outlines of a general protocol or approach (e.g., a protein may be measured by ELISA). Do not provide detailed protocols. More help

A description of the scientific basis for the indicated domains of applicability and the WoE calls (if provided).  More help

List of the literature that was cited for this KE description. More help