To the extent possible under law, AOP-Wiki has waived all copyright and related or neighboring rights to KE:1877

The KE title should describe a discrete biological change that can be measured. It should generally define the biological object or process being measured and whether it is increased, decreased, or otherwise definably altered relative to a control state. For example “enzyme activity, decreased”, “hormone concentration, increased”, or “growth rate, decreased”, where the specific enzyme or hormone being measured is defined. More help

Further information on Event Components and Biological Context may be viewed on the attached pdf.Because one of the aims of the AOP-KB is to facilitate de facto construction of AOP networks through the use of shared KE and KER elements, authors are also asked to define their KEs using a set of structured ontology terms (Event Components). In the absence of structured terms, the same KE can readily be defined using a number of synonymous titles (read by a computer as character strings). In order to make these synonymous KEs more machine-readable, KEs should also be defined by one or more “event components” consisting of a biological process, object, and action with each term originating from one of 22 biological ontologies (Ives, et al., 2017; See List). Biological process describes dynamics of the underlying biological system (e.g., receptor signalling). The biological object is the subject of the perturbation (e.g., a specific biological receptor that is activated or inhibited). Action represents the direction of perturbation of this system (generally increased or decreased; e.g., ‘decreased’ in the case of a receptor that is inhibited to indicate a decrease in the signalling by that receptor).Note that when editing Event Components, clicking an existing Event Component from the Suggestions menu will autopopulate these fields, along with their source ID and description. To clear any fields before submitting the event component, use the 'Clear process,' 'Clear object,' or 'Clear action' buttons. If a desired term does not exist, a new term request may be made via Term Requests. Event components may not be edited; to edit an event component, remove the existing event component and create a new one using the terms that you wish to add. More help

This is a structured field used to identify specific agents (generally chemicals) that can trigger the KE. Stressors identified in this field will be linked to the KE in a machine-readable manner, such that, for example, a stressor search would identify this as an event the stressor can trigger. NOTE: intermediate or downstream KEs in one AOP may function as MIEs in other AOPs, meaning that stressor information may be added to the KE description, even if it is a downstream KE in the pathway currently under development.Information concerning the stressors that may trigger an MIE can be defined using a combination of structured and unstructured (free-text) fields. For example, structured fields may be used to indicate specific chemicals for which there is evidence of an interaction relevant to this MIE. By linking the KE description to a structured chemical name, it will be increasingly possible to link the MIE to other sources of chemical data and information, enhancing searchability and inter-operability among different data-sources and knowledgebases. The free-text section “Evidence for perturbation of this MIE by stressor” can be used both to identify the supporting evidence for specific stressors triggering the MIE as well as to define broad chemical categories or other properties that classify the stressors able to trigger the MIE for which specific structured terms may not exist. More help

Latin or common names of a species or broader taxonomic grouping (e.g., class, order, family) can be selected from an ontology. In many cases, individual species identified in these structured fields will be those for which the strongest evidence used in constructing the AOP was available in relation to this KE. More help

The structured ontology terms for life-stage are more comprehensive than those for taxa, but may still require further description/development and explanation in the free text section. More help

The authors must select from one of the following: Male, female, mixed, asexual, third gender, hermaphrodite, or unspecific. More help

A description of the biological state being observed or measured, the biological compartment in which it is measured, and its general role in the biology should be provided. For example, the biological state being measured could be the activity of an enzyme, the expression of a gene or abundance of an mRNA transcript, the concentration of a hormone or protein, neuronal activity, heart rate, etc. The biological compartment may be a particular cell type, tissue, organ, fluid (e.g., plasma, cerebrospinal fluid), etc. The role in the biology could describe the reaction that an enzyme catalyses and the role of that reaction within a given metabolic pathway; the protein that a gene or mRNA transcript codes for and the function of that protein; the function of a hormone in a given target tissue, physiological function of an organ, etc. Careful attention should be taken to avoid reference to other KEs, KERs or AOPs. Only describe this KE as a single isolated measurable event/state. This will ensure that the KE is modular and can be used by other AOPs, thereby facilitating construction of AOP networks. More help

The anatomy and histology of the eye are highly conserved among vertebrates. The cornea and lens refract and focus light onto the posterior chamber of the eye, the vitreous cavity, which is covered by the retina. The retina consists of three specialised layers of cells, the outermost of which is formed by photoreceptors that absorb light and transmit the subsequent neural signal to the innermost layers, which consist of neurons specialised in processing and transmitting this neural signal (Wässle and Riemann, 1978; Cameron and Carney, 2000 ; Rockhill et al, 2000; Fadool, 2003). The neurons of the innermost layer converge to form the optic nerve, which transmits visual information to the brain (Gestri et al., 2012). The retina has different types of photoreceptors, the cones, which are responsible for colour vision, and the rods, which enable vision in the dark or in very low light conditions. In adults, cones are distributed in the retina in a precise and very regular arrangement, forming a photoreceptor mosaic. The precise spatiotemporal pattern of maturation of cones may affect the organization of this mosaic, and THs appear to play a role in the coordination of this maturation process (Suzuki et al., 2013). In the fish retina, this arrangement is most evident in the outer nuclear layer where the position of each cone subtype is precisely arranged relative to the others (Fadool, 2003; Robinson et al., 1993) resulting in a highly ordered crystalline-like mosaic.

The retinal pigment epithelium (RPE) is important to maintain a healthy and functional retina (Strauss 2005). The strong connection between the RPE cells with the tight junction, creates a blood-retinal barrier to mediate the directional transport of ions, water and nutrients while removing waste products. Another key function of the RPE is to absorb excess light energy to protect the neural retina from phototoxicity (Plafker 2012). Phagocytosis of spilled photoreceptor outer segments (Lister 2002) is another function of the RPE to maintain balanced photoreceptor growth, which is important for function.

One of the primary considerations in evaluating AOPs is the relevance and reliability of the methods with which the KEs can be measured. The aim of this section of the KE description is not to provide detailed protocols, but rather to capture, in a sentence or two, per method, the type(s) of measurements that can be employed to evaluate the KE and the relative level of scientific confidence in those measurements. Methods that can be used to detect or measure the biological state represented in the KE should be briefly described and/or cited. These can range from citation of specific validated test guidelines, citation of specific methods published in the peer reviewed literature, or outlines of a general protocol or approach (e.g., a protein may be measured by ELISA).Key considerations regarding scientific confidence in the measurement approach include whether the assay is fit for purpose, whether it provides a direct or indirect measure of the biological state in question, whether it is repeatable and reproducible, and the extent to which it is accepted in the scientific and/or regulatory community. Information can be obtained from the OECD Test Guidelines website and the EURL ECVAM Database Service on Alternative Methods to Animal Experimentation (DB-ALM). ?

For assessment of eye structure and layers, mostly simple morphometric analyses based on histological sections are sufficient. This can either be electron microscopy for subcellular changes, or normal light microscopy for cellular changes. Specific antibody staining might help to identify the different retinal layers, but usually, they are easily distinguishable by normal histological staining (e.g. HE staining).

Measurement of cell layer diameter is the most popular and simple method to assess changes in eye structure and layers. Moreover, measurement of the pigmentation grade of the retinal pigment epithelium can be used to assess structural changes.

In general, the eye structure is very conserved among vertebrates, but some differences exist with regard to shape and expression of the different retinal layers. Fig. 1 (from Richardson 2012) demonstrates the histology of the human vs the zebrafish eye. As in humans, the mature zebrafish retina consists of three nuclear layers separated by two plexiform layers. The photoreceptor rod and cone nuclei are located in the outer nuclear layer; the amacrine, horizontal, and Müller glial cell bodies are found in the inner nuclear layer and the ganglion cell bodies are placed in the ganglion cell layer. The plexiform layers connect these layers. In contrast to zebrafish, the human retina lacks UV-sensitive cones.

Other structural differences between species are mostly related to their lifestyle (e.g. nocturnal vs diurnal) (Bibliowicz 2011) and cannot be generalized for specific vertebrate classes. 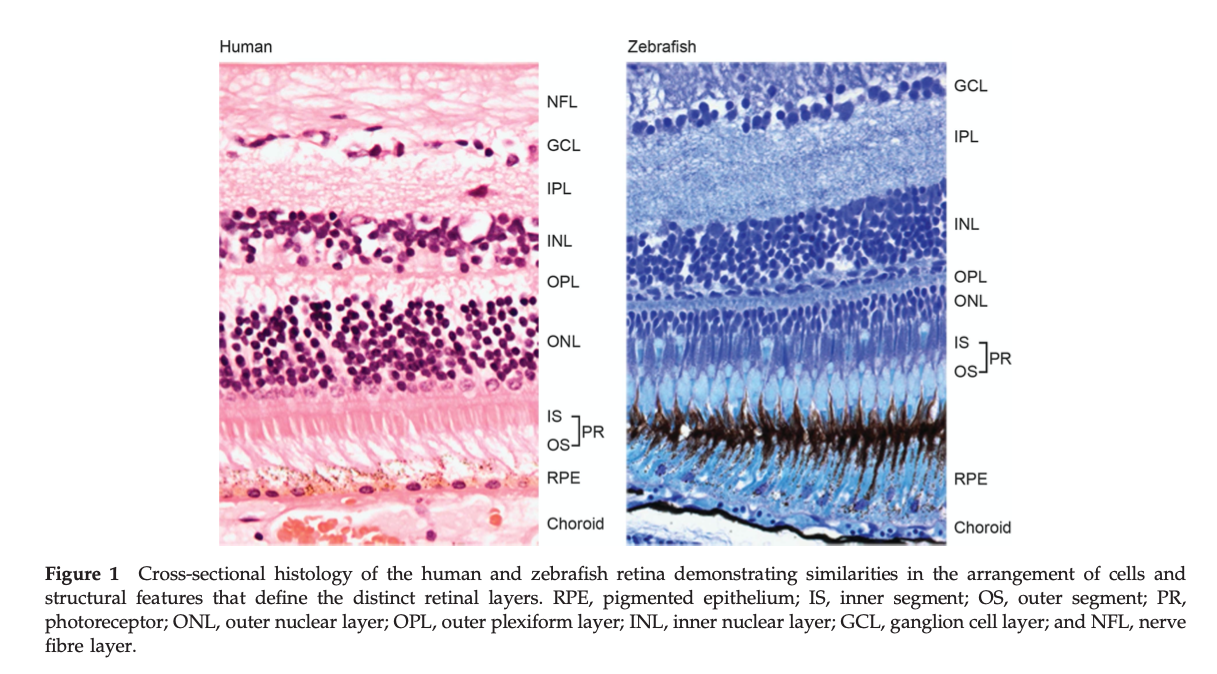 Eye structure differs between life stages, as the different retinal layers do not develop at the same time and the eye itself grows with the organism. Eye development in zebrafish closely resembles the one in humans and other vertebrates. The eye develops from three different embryological tissues that form the specific structures of the eye, starting with the optic vesicle at 16 hpf, which further develops into the two-layered optic cup composed of the retinal neuroepithelium and pigmented epithelium until 20 hpf. Lens development begins as a lens placode that forms a solid lens mass by 22 hpf. Afterwards, the neuroectodermal layers of the optic vesicle invaginate ventrally by 24 hpf. By 48 hpf, zebrafish eye morphogenesis is almost complete with only retinal neurogenesis continuing.

The is no indication for sex differences in eye structure in fish or other vertebrates.

4. Evidence for perturbation by stressor

Multiple studies demonstrate that eye development and its resulting structure can be disrupted by different stressors (reviewed for example by Chen 2020).

List of the literature that was cited for this KE description. Ideally, the list of references, should conform, to the extent possible, with the OECD Style Guide (https://www.oecd.org/about/publishing/OECD-Style-Guide-Third-Edition.pdf) (OECD, 2015). More help