Energy can be deposited on biomolecules from various forms of radiation. Radiation with high linear energy transfer (LET) tends to produce more complex, dense structural damage than low LET radiation; both, however, can lead to detrimental damage within a cell (Hada & Georgakilas, 2008; Okayasu, 2012; Lorat et al., 2015; Nikitaki et al., 2016). The DNA is particularly susceptible to damage which can be in the form of mutations. Mutations may occur in germ cells or somatic cells; mutations in germ stem and progenitor cells are often of the greatest concern, as they may persist and be propagated to offspring. Regardless of the cell type, there are several different categories of mutations including: missense, nonsense, insertion, deletion, duplication, and frame-shift mutations.  These mutations can present with different downstream effects which are not predictable but can potentially initiate a path to carcinogenesis.

The biological rationale for linking direct deposition of energy by ionizing radiation to mutation induction is strong. The structural and functional relationships in this KER contribute sufficiently to the overall biological plausibility.

There are numerous studies that demonstrate, using various model systems, an increase in mutation frequency in response to radiation exposure (Russell et al., 1957; Winegar et al., 1994; Gossen et al., 1995; Suzuki & Hei 1996; Albertini et al., 1997; Dubrova et al., 1998; Dubrova, Plumb, et al., 2000; Canova et al., 2002; Dubrova et al., 2002; Dubrova & Plumb, 2002; Masumura et al., 2002; Somers et al., 2004; Burr et al., 2007; Ali et al., 2012; Bolsunovsky et al., 2016; Mcmahon et al., 2016; Matuo et al., 2018; Nagashima et al., 2018; Wu et al., 1999; Hei et al., 1997; Nagasawa and Little, 1999; Barnhart and Cox, 1979; Thacker at al., 1982; Zhu et al., 1982; Metting et al., 1992; Schwartz et al., 1991; Chen et al., 1984; Albertini et al., 1997). The process of mutation induction by radiation is initiated when cells are exposed to ionizing radiation. These high-energy waves or particles interact with the genetic material in the nucleus, damaging the DNA and triggering a cascade of signalling events and activities aimed at repairing the damage. This process, however, may result in not only the repair of the DNA, but also the formation of mutations (Sankaranarayanan & Nikjoo, 2015). Of note, radiation is not likely to impact only one gene; more often than not, the random nature of energy deposition by radiation results in mutations to many genes and genomic sites clustered in the same area (Sankaranarayanan & Nikjoo, 2015; Adewoye et al., 2015). Many of the radiation-induced mutations have been documented as deletions (Gossen et al., 1995; Behjati et al., 2016), often of differing sizes in a number of different genes (Sankaranarayanan & Nikjoo, 2015). The mechanism for radiation-induced mutations is thought to be similar to the process for spontaneously-occurring mutations, as the structure of radiation-induced mutations examined at expanded simple tandem repeat (ESTR) loci was not found to differ from the structure of spontaneous mutations (Dubrova, 2005). Moreover, exposure to radiation may produce specific mutational signatures. Two ionizing radiation-specific mutational signatures were found when 12 radiation-induced secondary tumours across 4 different tumour types underwent whole-genome sequencing and bioinformatics processing. In particular, these radiation-exposed tumours were significantly enriched in small deletions and balanced inversions. These results were validated when the same mutational signatures were observed in radiation-exposed but not radiation-naïve prostate tumours from a previously-published dataset (Behjati et al., 2016). Similarly, another study examining mutations present in radiation-induced tumours of Nf1 heterozygous and wild-type mice revealed three distinctive mutational signatures. Interestingly, these signatures were found in all of the tumours regardless of its histology or of the animal’s genotype. Moreover, these signatures were still present after removal of the 33 most mutated samples from the analysis, after analysis of only the non-synonymous substitutions, and after analysis of only the synonymous substitutions (though the third mutational signature could not be extracted in this last analysis group) (Sherborne et al. 2015). There were also common cellular pathways that were found to be frequently mutated in the tumours of these mice. In sarcomas from mice of both genetic backgrounds (Nf1 heterozygous and wild-type), the top two pathways harbouring mutations were those influencing cellular assembly and organization, and those involved in cellular function and maintenance. Additionally, Ras pathways were commonly mutated in tumours from both genetic backgrounds. Specific to wild-type sarcomas, mutations were also found in cell cycle and cell signalling pathways (Sherborne et al., 2015). Supporting the finding that different genetic backgrounds in mice do not affect mutational signatures in tumours (Sherborne et al., 2015), there also does not appear to be strain-specific differences in ESTR mutational frequencies in response to radiation. One study examined five different strains of male mice that were irradiated and mated to unirradiated females at least 4 weeks post-irradiation. Although there was a difference in doubling doses between strains, the ESTR mutations themselves were not significantly different. Furthermore, there were no significant differences found between strains in terms of germline mutation induction (Dubrova, 2005).

Human studies have also shown correlations in radiation exposure and increased germline mutations. This relationship was assessed in families exposed accidently to high doses of ionizing radiation after the Chernobyl accident in Ukraine, and in families living in close proximity to the Semipalatinsk nuclear test site in Kazakhstan. In both cases, germline mutations were evaluated using eight hypervariable minisatellite probes. In the Chernobyl study, the paternal mutation rate in the exposed group was significantly increased by 1.6-fold relative to an unexposed control group; there was, however, no significant difference in the maternal germline mutation rates between the exposed group and the unexposed control group (Dubrova et al., 2002C). In the Semipalatinsk study, analysis of families living in the affected region over three generations found that germline mutations in the first and second generation were significantly increased relative to unexposed families living in a low-radiation area. Overall, the germline mutation rate in the families exposed to radiation from this test site was doubled (Dubrova, Bersimbaev, et al., 2000).

Figure 1: Plot of example studies (y-axis) against equivalent dose (Sv) used to determine the empircal link between direct deposition of energy and increased cell mutation rates. The z-axis denotes the equivalent dose rate used in each study. The y-axis is ordered from low LET to high LET from top to bottom. 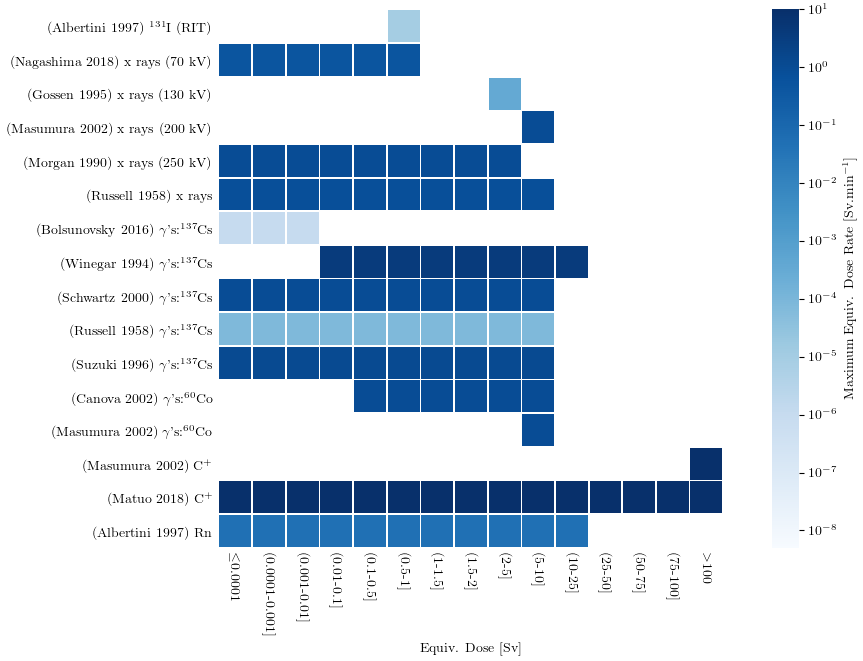 Figure 2: Plot of example studies (y-axis) against time scales used to determine the empircal link between direct deposition of energy and and increased cell mutation rates. The z-axis denotes the equivalent dose rate used in each study. The y-axis is ordered from low LET to high LET from top to bottom. 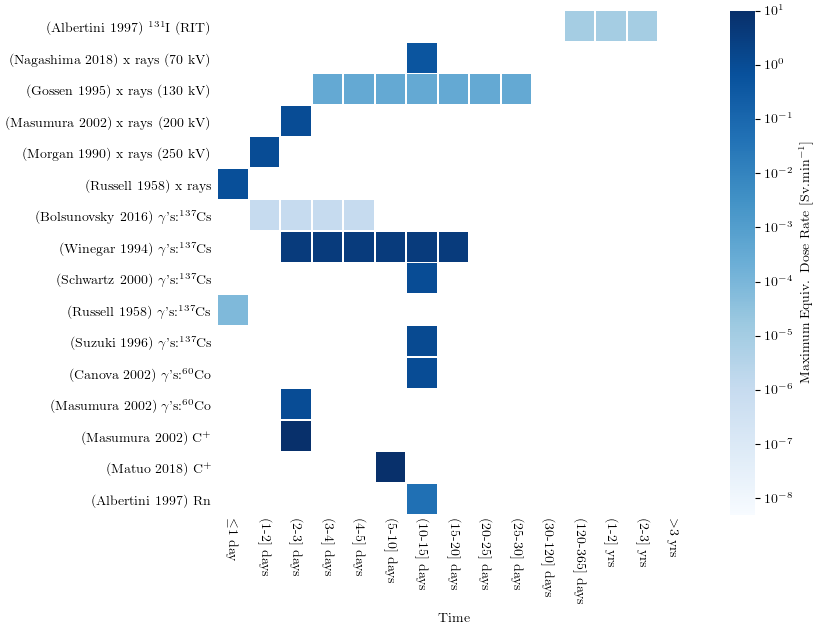 This relationship between radiation exposure and mutation incidence is impacted by several different factors. Higher LET radiation, such as high LET carbon ions and neutrons, were found to induce more mutations in comparison to radiation of a lower LET, including low LET carbon ions, gamma-rays and X-rays (Dubrova & Plumb, 2002; Matuo et al., 2018). Similarly, more mutations were present in the gametes of mice exposed to acute X-rays compared to those exposed to chronic gamma-rays (Russell et al., 1957). The tissue being irradiated may also have a role in determining mutant frequency, as whole body irradiation of mice led to a significant increase in mutations (mostly deletions) of the spleen, liver, lung and kidneys (Gossen et al., 1995; Masumura et al., 2002), but not the testis (Masumura et al., 2002). Furthermore, the specific kind of mutation may be dependent on the type of radiation. In one study, irradiation of the liver with carbon ions resulted in a significant increase in deletion mutations, while irradiation with X-rays or gamma-rays resulted in a significant increase in point mutations (Masumura et al., 2002).

Below are representative examples of the mutation frequency rates across different studies. Overall, a quantitative understanding of this linkage suggests that mutation rates can be predicted and are dependent on the type and dose of radiation exposure.

An attempt to better define this time scale relationship was made in a study using Salmonella typhimurium bacteria. This study was designed to determine how mutation frequency was affected by constant cesium-137 gamma-ray radiation exposure at defined dose rates of 67.8 uGy/hour, 3.2 uGy/hour, and 0.6 uGy/hour; these mutation frequencies were compared to a control group exposed to background radiation levels (0.09 uGy/hour). Mutation frequencies were evaluated after 24, 48, 72 and 96 hours of constant exposure. At 24 hours, the 67.8 uGy/hour, 3.2 uGy/hour and 0.6 uGy/hour mutant frequencies were significantly higher than background exposure controls. Interestingly, however, these levels were decreased at 48 hours and continued to decline gradually towards control frequencies over time. This decline was proposed to be due to an elimination of the highly mutated cells, leaving behind an increasing number of cells that had adapted to the radiation and were thus more equipped for survival (Bolsunovsky et al., 2016). Other studies are required to build a more complete understanding of this timeline.

There are several factors that have been documented to affect the relationship between direct deposition of energy and increased mutation frequency. The sex, age, and use of adaptive dosing have been demonstrated to affect the radiation-induced mutations present in offspring. In contrast to male mice, female mice that were irradiated in utero (Barber et al., 2009) or as adults (Ali et al., 2012)(Ali, 2012) did not produce offspring with increased ESTR mutations. This suggests that radiation-induced mutations are only heritable through the paternal line. As such, the age of the father may affect the mutant frequency in the offspring, as increased mutations were present in spermatogenic cells of older male mice relative to younger males both at baseline levels and post-irradiation (Xu et al., 2012). Lastly, the use of ‘adaptive’ radiation dosing, or giving a very small dose 24 hours prior to the full radiation dose, may also affect offspring’s mutational frequency. In male mice who received adaptive dosing relative to males who received only the full radiation dose, there were significant decreases in germline mutation frequencies and in the rate of paternal mutations in their offspring (Somers et al., 2004) .