Energy can be deposited on biomolecules from various forms of radiation in a randomized manner. Radiation with high linear energy transfer (LET) tends to produce more complex, dense structural damage than low LET radiation; both, however, can lead to detrimental damage within a cell (Hada and Georgakilas 2008; Okayasu 2012; Lorat et al. 2015; Nikitaki et al. 2016). The DNA is particularly susceptible to damage in the form of DNA strand breaks.  This damaged DNA can lead to aberrations/rearrangements in chromosomes and chromatids. Examples of chromosome-type aberrations include chromosome-type breaks, ring chromosomes, and dicentric chromosomes, while chromatid-type aberrations refer to chromatid-type breaks and chromatid exchanges (Hagmar et al. 2004; Bonassi et al. 2008). Other types of CAs that may occur in response to radiation include micronuclei (MN), nucleoplasmic bridges (NPBs), and copy number variants (CNVs). CAs may also be classified as stable aberrations (translocations, inversions, insertions and deletions) and unstable aberrations (dicentric chromosomes, acentric fragments, centric rings and MN) (Hunter and Muirhead 2009; Qian et al. 2016).

The process from deposition of energy to CA occurrence has been described in several reviews (Smith et al. 2003; Christensen 2014; Sage and Shikazono 2017). When ionizing radiation comes into contact with a cell, it is able to deposit energy through ionization and excitation of molecules, which results in the freeing of electrons. These electrons have enough energy to break chemical bonds; thus if the high-energy electrons come into contact with DNA, they may break DNA bonds and cause damage in the form of double-strand breaks, single-strand breaks, base damage, or the crosslinking of DNA to other molecules. This damage should trigger DNA repair. If the enzymatic repair, however, is incorrect or incomplete, this could push the cell towards apoptotic pathways. However, the repair processes may lead to asymmetrical exchanges in the chromosomes that are not removed from the cell and can propagate in the form of aberrations. Radiation-damaged cells display accumulated CAs  in the form of chromosomal rearrangements, genetic amplifications and/or MN (Smith et al. 2003; Christensen 2014; Sage and Shikazono 2017).

The first incidence of radiation-induced CA was reported by Weissenborn and Streffer (1988).  The authors show formation of CAs in neutron and X-irradiated mouse embryos, subsequent studies by numerous laboratories have shown CA formation from different radiation qualities (reviewed by Smith et al, 2003).  More recent studies also support this notion.  A study using a single particle irradiation system (SPICE) to deliver highly directed and tightly controlled radiation doses to select nuclei of oral squamous cell carcinoma cells was shown to generate 46 mutant monoclonal sublines. Copy number alterations ((CNAs), which are CNVs found in somatic cells rather than germline cells (Li et al. 2009)), were found in 43 (93%) of the sublines generated. Although most of the sublines were found to have multiple CNAs, one subline in particular had 16 documented CNAs. Further genetic analyses of this subline revealed 14 de novo chromosomal rearrangements and 2 detectable translocations in addition to the 16 CNAs, which is suggestive of chromothripsis. This study thus provides strong evidence that direct deposition of energy by ionizing radiation results in CAs, and in some cases, chromothripsis (Morishita et al. 2016).

CNVs may also be generated through deposition of energy by ionizing radiation. Due to the structural similarities between CNVs that are radiation-induced, chemically-induced, and spontaneously-occurring, all CNVs are likely produced by a similar mechanism. The chemicals, aphidicolin and hydroxyurea, are known inducers of DNA replication stress. This suggests that radiation-induced CNVs are also formed through a similar replication-dependent mechanism(Arlt et al. 2014). Additionally, CNVs may affect germline cells. In fact, there was a significant 8-fold increase in de novo CNVs in the progeny of irradiated male mice, regardless of whether the radiation affected post-meiotic sperm or pre-meiotic sperm. The majority of these CNVs were found to be large deletions, often more than 1000 kB (Adewoye et al. 2015).

Figure 1: Plot of example studies (y-axis) against equivalent dose (Sv) used to determine the empircal link between direct deposition of energy and increased rates of chromosomal aberrations. The y-axis is ordered from low LET to high LET from top to bottom. 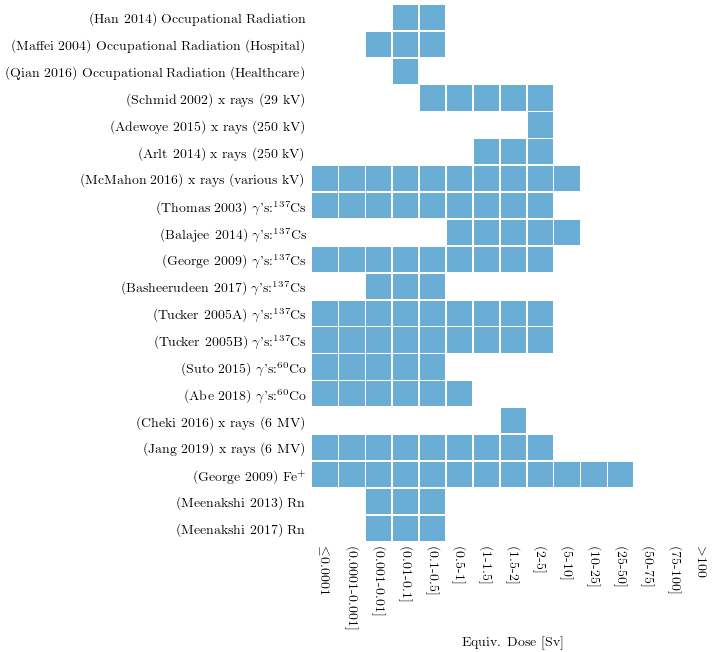 Figure 2: Plot of example studies (y-axis) against time over which studies were conducted for a temporal response used to determine the empircal link between direct deposition of energy and increased rates of chromosomal aberrations. The y-axis is ordered from low LET to high LET from top to bottom. 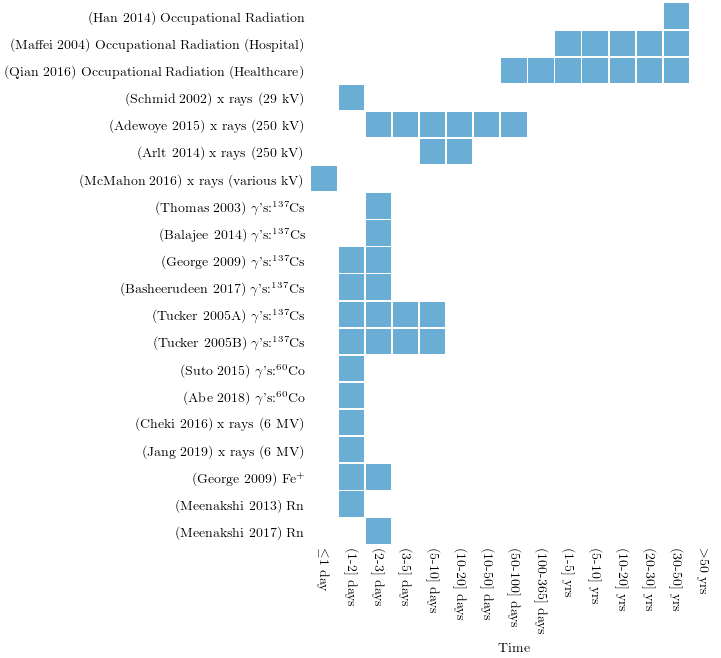 Several human epidemiological studies have provided evidence of both dose/incidence and temporal concordance in terms of deposition of energy by ionizing radiation and resultant CAs. In a study involving 34 health professionals occupationally exposed to radiation, there was a significant increase in the number of chromosome breaks and aberrant cells relative to a group of 35 unexposed professionals from the same hospital. Furthermore, when the exposed group was broken into two groups based on the levels of radiation exposure (those with a dose equivalent to whole body of ionizing radiation (Hwb) of less than/equal to 50 mSv and those with an Hwb greater than 50 mSv), there was a dose-dependent increase in aberrant cells, chromosome breaks and chromatid breaks such that the higher exposure group had significantly elevated aberrations relative to controls for all three parameters scored (Maffei et al. 2004). In a similar study involving 1,392 radiation healthcare workers in the city of Tangshan in 2010, there was a significant increase in CA and MN in exposed workers relative to unexposed healthy controls. Furthermore, there were significant, dose-dependent increases in the CA rate and the MN rate when the exposed workers were split into groups according to cumulative radiation dose, ranging from less than 10 mSv up to greater than 50 mSv. There was also a time-dependent increase in CA and MN rate, such that workers with longer exposure times had significantly increased CAs and MNs. Exposure times ranged from less than 10 years to greater than 20 years (Qian et al. 2016).

Quantitative understanding of this linkage suggests that CA frequency can be predicted from the radiation, as per the representative examples provided below. When predicting this relationship, the characteristics of the radiation and the model system should be taken into account (Smith et al. 2003; Hunter and Muirhead 2009).

There is evidence of a positive response-response relationship between the radiation dose and the frequency of CAs (Schmid et al. 2002; Thomas et al. 2003; Tucker et al. 2005a; Tucker et al. 2005b; George et al. 2009; Arlt et al. 2014; Balajee et al. 2014; Suto et al. 2015; Mcmahon et al. 2016; Abe et al. 2018; Jang et al. 2019). Most studies found that the response-response relationship was linear-quadratic (Schmid et al. 2002; Suto et al. 2015; Abe et al. 2018; Jang et al. 2019). One study, however, reported different results when CAs were examined across five cell lines that had been irradiated with either iron nuclei or gamma-rays. For complex aberrations in three types of fibroblasts (two of which were deficient in DNA repair), the best fit was a quadratic relationship for both gamma-rays and iron ions; for simple aberrations induced by iron ions in these cells, there was a linear relationship found. In two tumor cell lines, a linear response was defined for simple aberrations for both types of radiation, while the response for complex aberrations was not well-defined by the models that were evaluated (George et al. 2009).

Interestingly, in vivo radiation exposure has been shown to induce long-lasting CAs in a relatively short time-frame. When lymphocytes from patients undergoing an interventional radiology procedure were compared pre-procedure and 2-3 hours post-procedure, there were significant increases in chromatid-type aberrations, chromosome-type aberrations, dicentrics and MN in post-procedure lymphocytes)(Basheerudeen et al. 2017). Similarly, lymphocytes from subjects exposed to radiation 32-41 years prior to blood collection were found to have significantly increased chromosome-type aberrations (acentric fragments, dicentrics and translocations) and MN relative to unexposed controls (Han et al. 2014). Taken together, the results from these two studies suggest that CAs are not only induced within mere hours of radiation exposure, but that these radiation-induced CAs may also endure for several decades.

As evidenced in chronic exposure studies, the relationship between CAs and radiation may be affected by sex, age and smoking status. In terms of sex, females were found to have increased aberrant cells and chromosome breaks relative to males (Maffei et al. 2004). Additionally, increases in age were associated with increased CAs, including sister chromatid exchanges per number of metaphases (Santovito et al. 2013) and MN (Vellingiri et al. 2014). Smoking was also found to increase chromosomal damage. Aberrant cells and chromosome breaks were found to be significantly increased in smokers relative to non-smokers (Maffei et al. 2004). Likewise, blood samples from smokers that were exposed to radon gas had lymphocytes with significantly increased dicentric aberrations, acentric fragments, chromatid breaks (Meenakshi and Mohankumar 2013), MN, and NPBs (Meenakshi et al. 2017) relative to lymphocytes from non-smokers also exposed to radon gas.

In vitro studies found that hyperthermia modified the effect of radiation on CA induction. In cells exposed to hyperthermic conditions (41oC for one hour) followed by radiation (4 Gy), there were significant increases in chromosomal translocations and chromosomal fragments at one hour and at 24 hours post-exposure, respectively, as compared to cells exposed only to radiation (Bergs et al. 2016).

The domain of applicability applies to eukaryotic cells and multi-cellular organisms such as mice and humans.