The weight of evidence supporting the relationship between mitochondrial dysfunction and impaired proteostasis, including the impaired function of UPS and ALP that results in decreased protein degradation and increase protein aggregation is strong.

The biological relationship between Mitochondrial dysfunction and Impaired proteostasis (unbalanced protein homeostasis) that involves dysregulation of proteins degradation (misfolded or damaged) as well as removal of cell organelles is partly understood. Under physiological conditions, mechanisms by which proteostasis is ensured include regulated protein translation, chaperone assisted protein folding and functional protein degradation pathways. Under oxidative stress, the proteostasis function becomes burdened with proteins modified by ROS (Powers et al., 2009; Zaltieri et al., 2015). These changed proteins can lead to further misfolding and aggregation of proteins (especially in non-dividing cells, like neurons). Particularly in DA cells, oxidative stress from dopamine metabolism and dopamine auto-oxidation may selectively increase their vulnerability to CI inhibitors (such as rotenone) and cause additional deregulation of protein degradation (Lotharius and Brundin, 2002; Esteves et al., 2011). As most oxidized proteins get degraded by UPS and ALP (McNaught and Jenner, 2001), mitochondrial dysfunction and subsequent deregulation of proteostasis play a pivotal role in the pathogenesis of PD (Dagda et al., 2013; Pan et al., 2008; Fornai et al., 2005; Sherer et al., 2002). It is also well documented that increased oxidative stress changes the protein degradation machinery and leads to a reduction of proteasome activity (Lin and Beal, 2006; Schapira, 2006).

Based on the existing in vitro and in vivo data it is suggested that mitochondrial dysfunction impairs protein homeostasis through oxidative and nitrosative stress resulting in protein aggregation, disruption of microtubule assembly and damaged intracellular transport of proteins and cell organelles.

Similar results, showing impaired autophagic flux resulting in α-synuclein accumulation and the rupture of lysosomes in neuronal cell lines exposed to rotenone have been described in many other studies (e.g. Mader et al., 2012; Sarkar et al., 2014).

α-synuclein is one of the most abundant neuronal proteins (Vekrellis et al., 2011). Several PD-related mutations and environmental toxicants cause autophagy dysfunction and lead to the accumulation of misfolded proteins in DA neurons, including α-synuclein. Both monomeric and aggregated forms of α-synuclein can be degraded by macroautophagy, whereas only wild-type α-synuclein (not Ala30Pro, Ala53Thr and Glu46Lys mutant forms) is degraded by the process of chaperone-mediated autophagy (CMA) (Vekrellis et al., 2011).

Inhibition of the mitochondria respiratory chain induces oxidative stress that in turn leads to lipid peroxidation of cellular and vesicular membranes at synaptic sites, resulting in dysfunction of neurotransmitter release. These effects facilitate α-synuclein conformational changes, such as accumulation, and aggregation. It has been demonstrated that synaptic dysfunction (caused by mitochondrial dysfunction) triggered the accumulation of α-synuclein (Nakata et al., 2012). Also, alterations of mitochondrial fission or dynamics can reduce synaptic mitochondrial load and impair neuronal function by hindering the proper energy demand to ensure synaptic function. Mitochondrial behaviours, especially those regulated by neuronal activity and synapse location, determine their distribution in the axon (Obashi and Okabe, 2013). These observations support the idea that mitochondrial dysfunction can affect synaptic environment and consequently result in α-synuclein accumulation at synapses (Zaltieri et al., 2015).

A vicious circle is observed here as α-synuclein aggregation potentiates proteosomal dysfunction and v/v. In this vicious cycle it is difficult to establish exact quantitative relationship of these two events.

As described in the studies above (Empirical support for linkage) a quantitative or semi-quantitative relationship has been established between rotenone-induced mitochondrial dysfunction and the impairment of UPS/ALP function. Below some representative studies are reported as examples for how such quantitative evaluations can be performed.

Examples of quantitative evaluation of this KER 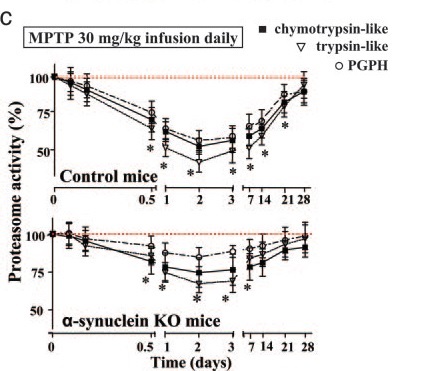 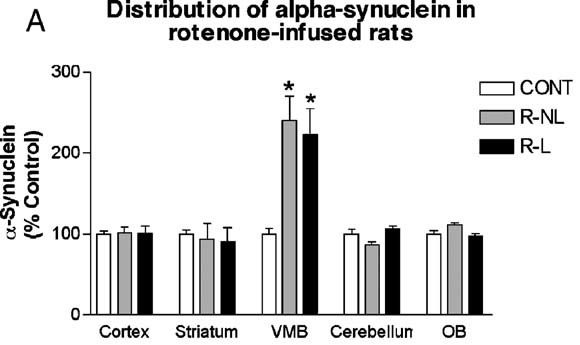 Fig. 3. α-Synuclein levels were selectively increased in the ventral midbrain (VMB) region of rotenone-infused rats with or without lesion. α-Synuclein levels, as determined from Western blot analysis, from rotenone-treated rats were expressed as a percentage of values from control vehicle-infused rats. Results are mean ± SEM (n = 3 control, 6 rotenone with lesion, 3 rotenone with no lesion) *P < 0.05 vs. vehicle-infused rats (from Betarbet et al., 2006, Fig. 3A). 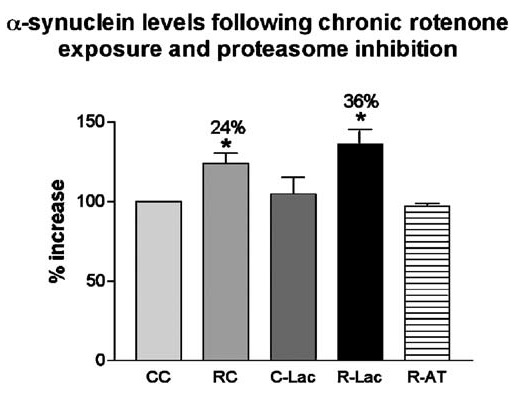 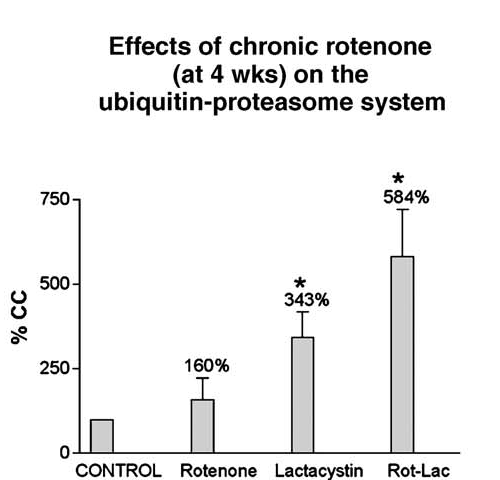 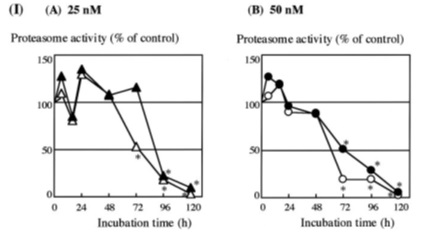 Fig. 6. Effects of rotenone on the activity of proteasome. Proteasome activity in the cytoplasmic fraction of cells treated with 25 nM (A) or 50 nM (B) rotenone was measured fluorometrically in the absence (open triangles and circles) or presence (solid triangles and circles) of exogenously added ATP (2 mM) (from Shamoto-Nagai et al., 2003, Fig. 6).

The ubiquitin proteasome system is highly conserved in eukaryotes, from yeast to human. Ubiquitin is a small (8.5 kDa) regulatory protein that has been found in almost all tissues of eukaryotic organisms. For instance, drosophila has been used as PD model to study the role of ubiquitin in α-synuclein induced-toxicity (Lee et al., 2009). Human and yeast ubiquitin share 96% sequence identity. Neither ubiquitin nor the ubiquitination machinery are known to exist in prokaryotes. Autophagy is ubiquitous in eukaryotic cells and is the major mechanism involved in the clearance of oxidatively or otherwise damaged/worn-out macromolecules and organelles (Esteves et al., 2011). Due to the high degree of conservation, most of the knowledge on autophagy proteins in vertebrates is derived from studies in yeast (Klionsky et al., 2007). Autophagy is seen in all eukaryotic systems, including fungi, plants, slime mold, nematodes, fruit flies and insects, rodents (i.e., laboratory mice and rats), and humans. It is a fundamental and phylogenetically conserved self-degradation process that is characterized by the formation of double-layered vesicles (autophagosomes) around intracellular cargo for delivery to lysosomes and proteolytic degradation.

Kim I, Rodriguez-Enriquez S, and Lemasters JJ. 2007. Selective degradation of mitochondria by mitophagy. Archives of Biochemistry and Biophysics. 462(2)245–253.

Obashi K, and Okabe S. 2013 Regulation of mitochondrial dynamics and distribution by synapse position and neuronal activity in the axon. European Journal of Neuroscience. 38(3) 2350–2363, 2013.

Pan-Montojo FJ, and Funk RHW. 2010. Oral administration of rotenone using a gavage and image analysis of α-synuclein inclusions in the enteric nervous system. Journal of Visualized Experiments, no. 44, article 2123.