In the brain, thiol (SH)- and seleno-containing proteins involved in protection against oxidative stress are mainly located in mitochondria and in the cytoplasm of the different neural cell types (Comini, 2016; Hoppe et al. 2008; Barbosa et al. 2017; Zhu et al. 2017). The main SH-containing peptide involved in protection against oxidative stress is Glutathione (GSH), a tripeptide acting as a cofactor for the enzyme peroxidase and thus serving as an indirect antioxidant donating the electrons necessary for its decomposition of H2O2. The seleno-containing proteins of interest are: (i) the Glutathione Peroxidase (GPx) family, involved in detoxification of hydroperoxides; (ii) the Thioredoxin Reductase (TrxR) family, involved in the regeneration of reduced thioredoxin (Pillai et al., 2014; ), and the less studied SelH, K, S, R, W, and P selenoproteins (Pisoschi and Pop, 2015, Reeves and Hoffmann, 2009). Binding of chemicals to these proteins induces either their inactivation or favor their degradation (Farina et al. 2009; Zemolin et al. 2012). Of particular importance, the GSH/GPx and thioredoxin (Trx)/TrxR systems are the two main redox regulators of mammalian cells and the disruption of their activities can compromise cell viability (Ren et al. 2016).

Due to the ubiquitous distribution of the SH-/ and seleno-proteins involved in protection against oxidative stress and inview of the strong affinity of MeHg and Hg2+ for thiolate and selenolate groups the binding of MeHg and Hg2+ to thiol and selenol groups is expected to occur in the living cells of all taxonomic groups found in the biosphere.The conservation of these effects across different vertebrate species indicates that thiol- and selenol-containing proteins (particularly, TrxR and GPx) can also be important targets of electrophilic forms of Hg(EpHg+ or MeHg and Hg2+) toxicity in fish and birds (Heinz, 1979; Carvalho et al. 2008b; Heinz et al. 2009; Xu et al.2012, 2016). The disruption of the Trx and GSH systems by MeHg and Hg2+have been demonstrated in zebra-sea breams  (Branco et al. 2011; 2012a,b) and salmon (Salmo salar, Bernstssen et al. 2003).  MeHg can also interfere with the Trx and GSH systems in zebrafish (Yang et al. 2007; Cambier et al. 2012).


Evidence for Perturbation by Stressor

The binding of Methylmercury (MeHg) to redox sensitive thiol- or selenol-groups can disrupt the activity of enzymes or the biochemical role of non-enzymatic brain proteins. The stable or transitory interaction (binding) of MeHg with critical thiol and selenol groups in target enzymes can disrupt the biological function of different types of enzymes, particularly of the antioxidant selenoenzymes thioredoxin reductase (TrxR) and glutathione peroxidase isoforms. The dysregulation of cerebral glutathione (GSH and GSSG) and thioredoxin [Trx or Trx(SH)2]  systems by MeHg (Farina et al. 2011; Branco et al. 2017) can impair the fine cellular redox balance via disruption of sensitive cysteinyl- or thiol-containing proteins (Go etal., 2013; Go et al. 2014; Jones 2015). 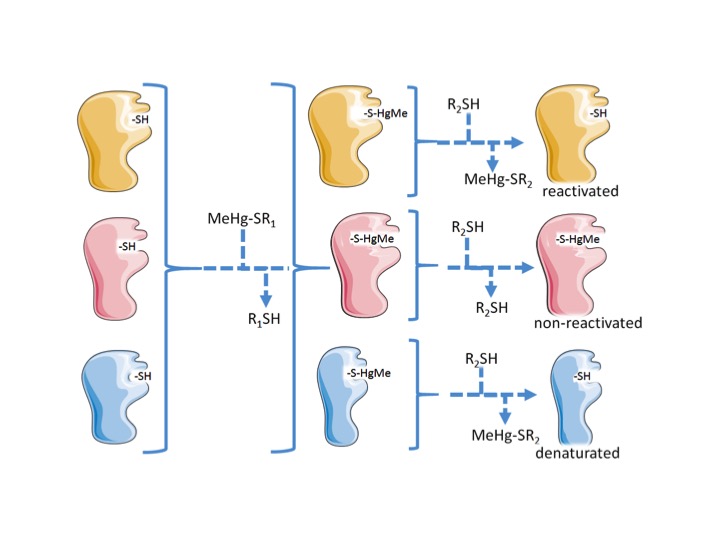 Figure 1 – Hypothetical Binding of MeHg to different types of target proteins. The binding of MeHg to proteins can cause either a transitory inhibition of the protein fucntion (first line, the yellow protein was reactivated by interacting with LMM-SH or R-SH). The pink protein is an example of protein that after the binding of MeHg suffered a change in the structure in such a way that it cannot be reactivated by LMM-SH or R-SH.  The third protein (blue) is an example of protein that was permanently denaturated after MeHg binding and even after the removal of MeHg the activity was not recovered. The same type of interactions can be applied to the selenol-containing proteins (i.e., the selenoproteins).

The affinity of Mercury chloride (Hg2+) for thiol and selenol groups is higher than that of MeHg (compare Table 2 with Table 1). The constants described in Table 1 and 2 indicate that MeHg and Hg2+ behave as  strong soft electrophiles, i.e., theyhave much higher affinity for the soft nucleophiles centers of thiol- and selenol-containing molecules (Rabenstein 1978a; Arnold et al. 1986; Sugiura et al., 1976).Furthermore, the rate constant for the reaction of MeHg with thiol/thiolate (R-SH/R-S-) has been estimated to be about 6 x 108 M-1.sec-1,  indicating that the reactions of electrophilic forms of Hg (EpHg+ ; here MeHg and Hg2+) with thiolate and selenolate groups are diffusion controlled reactions (Rabenstein  and Fairhurst, 1975). The constant indicates that the binding of EpHg+ to thiolate (-S-) or selenolate (-Se-) groups will occurr almost instaneously, when an EpHg+ collides with –S- or -Se- groups.

As corollary, the occurrence of free MeHg and Hg2+ or bound to other ligands such as carboxylates, amines, chloride or hydroxyl anions in the physiological media of living cells is insignificant or nonexistent (George et al. 2008). The binding of MeHg to abundant low molecular mass thiols or LMM-SH (e.g., cysteine and reduced glutathione-GSH) and high molecular mass thiol-containing proteins or HMM-SH (e.g., albumin, hemoglobin, etc) is critical for the MeHg distribution from non-target to target organs and cells (Farina et al. 2017). The coordination of MeHg with one –S- group of a LMM-SH will determine MeHg distribution to its targets organs, including the brain. The coordination of Hg2+ with two –S- of LMM-SH molecules (particularly, cysteine or Cys) will determine the distribution of Hg2+ to kidney (which is its main target) and to non-classical targets organs, such as the brain (Oliveira et al. 2017). The entrance of Hg2+ into the brain is proportionally small, but recent literature data have indicated the neurotoxicity of very low and environmentally relevant doses of Hg2+ in rodents (Mello-Carpes et al. 2013 ), which confirms data obtained with toxic doses in rodents (Peixoto et al. 2007 ;  Franciscato et al. 2009 ; Chehimi et al. 2012).

Table 1 - Affinity constants of methylmercury for important chemical groups found in biomolecules (adapted from aRabestein, 1978a, bRabestein and Bravo, 1987, using different thiol-containing molecules with the arylmercurialpara-mercurybenzenosulfonate,  and from cArnold et al. 1986 taking into consideration that the calculated formation constant of –Se-MeHg conjugates was 0.1 to 1.2 order greater than that of –S-MeHg). The values represent the Log of the constants.

Table 2. Formation constants of Hg2+ with some representative nucleophilic centers from biomolecules.

We have to emphasize that what we call of binding to –SH or –SeH groups is, in fact, an exchange reaction of MeHg from MeHg-S conjugates (e.g., MeHg-cysteine or MeHg-Cys and MeHg-glutathione or MeHg-SG. conjugates) to  a free thiol/thiolate- or selenol/selenolate-group from non-target or target proteins. Thus, the interaction of MeHg with its target proteins in the brain usually involves the exchange of MeHg from low-molecular mass conjugates (LMM-S-conjugates) to a thiol or selenol group in different types of proteins (Rabenstein 1978b; Rabenstein and Fairhurst, 1975; Reid and Rabenstein et al.; 1982; Rabenstein and Reid, 1984; Arnold et al. 1986; Farina et al. 2011, 2017; Dórea et al. 2013). 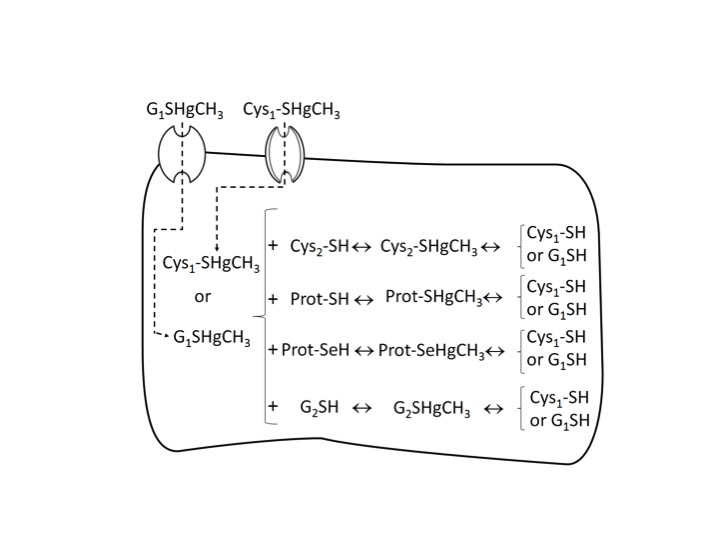 Table 3: References for the inhibition by MeHg and Hg2+ of SH-/seleno-proteins involved in protection against oxidative stress

Acrylamide is an a,β-unsaturated (conjugated) reactive molecule, which can react with thiol (-SH) and amino (-NH2) groups in proteins  (LoPachin, 2004; LoPachin et al. 2007; 2009; 2011;  Friedman, 2003; Bent et al. 2016; Martyniuk et al.2011; LoPachin and Gavin, 2014 ). However, the rate constant for the reaction between acrylamide with thiol/thiolate groups is much lower than that for MeHg.  The rate of reaction of this compound with HMM-SH and LMM-SH is slow but can occur under physiological conditions (Tong et al. 2004; LoPachin, 2004). The inhibition of brain enzymes by acrylamide have been studied and the inhibition caused by acrylamide in some HMM-SH can be reversible  (Howland et al. 1980). Despite of this, we can infer that some targets of MeHg and acrylamide can overlap, in particular GSH,where the rate constant for MeHg and acrylamide are ≈6.0 x 108 M-1.sec-1 and ≈0.15-2.1 x 10-2 M-1.sec-1, respectively (Yousef and Demerdash, 2006; Lapadula et al. 1989; Kopańska et al. 2015). Acrylamide can also be metabolized to an epoxide intermediate (glycidamide), which can also form adducts with cysteinyl residues in HMM-SH target proteins (Bergmark et al. 1991).

Branco V. et al. (2011), Inhibition of the thioredoxin system in the brain and liver of zebra-seabreams exposed to waterborne methylmercury. Toxicology and applied pharmacology. 251(2), pp. 95-103.

Branco, V. et al. (2012a), Mercury and selenium interaction in vivo: on thioredoxin reductase and glutathione peroxidase.Free Radical in  Biology and  Medicine, 52(4): 781-793.

Heinz, G.H., (2009),  Species differences in the sensitivity of avian embryos to methylmercury. Archives of Environmental Contamination and Toxicology, 56(1) :  pp.129-138.

Mori N, Yasutake A, Hirayama K. Comparative study of activities in reactive oxygen species production/defense system in mitochondria of rat brain and liver, and their susceptibility to methylmercury toxicity. Archives of toxicology. 2007 Nov 1;81(11):769-76.