Oxidative stress and Developmental impairment in learning and memory 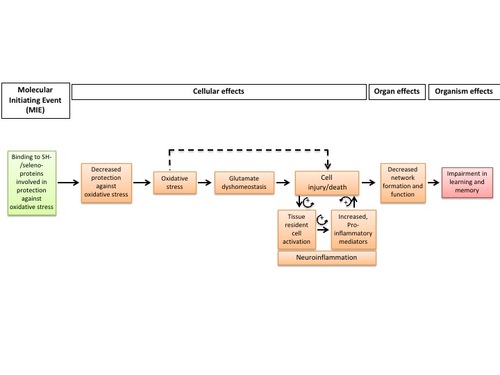 This Adverse Outcome Pathway (AOP) describes the linkage between binding to sulfhydryl(SH)-/seleno-proteins involved in protection against oxidative stress and impairment in learning and memory, the Adverse Outcome (AO). Binding to SH-/ seleno-proteins involved in protection against oxidative stress has been defined as the Molecular Initiating Event (MIE). Production, binding and degradation of Reactive Oxygen Radicals (ROS) are tightly regulated, and an imbalance between production and protection may cause oxidative stress, which is common to many toxicity pathways. Oxidative stress may lead to an imbalance in glutamate neurotransmission, which is involved in learning and memory. Oxidative stress may also cause cellular injury and death. During brain development and in particular during the establishment of neuronal connections and networks, such perturbations may lead to functional impairment in learning and memory. Neuroinflammation (Resident cell activation; Increased pro-inflammatory mediators) is triggered early in cell injury cascades and is considered as an exacerbating factor. The weight-of-evidence supporting the relationship between the described key events is based mainly on developmental effects observed after an exposure to the heavy metal, mercury, known for its strong affinity to many SH-/seleno-containing proteins, but in particular to those having anti-oxidant properties, such as glutathione (GSH). The overall assessment of this AOP is considered as strong, based on the biological plausibility, the empirical support and on the essentiality of the Key Events (KEs), which are moderate to strong, since blocking, preventing or attenuating an upstream KE is mitigating the downstream KE. The gap of knowledge is mainly due to limited quantitative evaluations, impeding thus the development of predictive models.


Experimental and epidemiological evidences indicate that compared to the adult central nervous system (CNS), the developing CNS is generally more susceptible to toxicant exposure (Costa et al., 2004; Grandjean and Landrigan, 2006). Pre-natal and post-natal exposure may have long-term consequences, i.e. not detected immediately at the end of the exposure period. Such effects on visuospatial memory for example have been described on child development in communities with chronic low level mercury exposure (Castoldi et al., 2008a; Debes et al., 2006; Grandjean et al., 2014; Lam et al., 2013).

The aim of this AOP is to capture the KEs and the KERs that occur after binding to thiol- and selenol groups of proteins involved in protection against oxidative stress, the MIE, and impairment in learning and memory, the AO, which is a neurotoxicity marker belonging to the OECD regulatory tool box. The chemical initiators used for the empirical support are methylmercury and mercury chloride, and acrylamide. Data are most extensive for mercury as stressor during development; data for acrylamide are much more limited and restricted to some KEs. Chronic, low-dose prenatal MeHg exposure from maternal consumption of fish has been associated with endpoints of neurotoxicity in children, including poor performance on neurobehavioral tests, particularly on tests of attention, fine-motor function, language, visual-spatial abilities (e.g., drawing), and verbal memory (NRC, 2000). However, it is important to note that some uncertainties remain about the effects of low dose of mercury during brain development (Grandjean et al., 1999). Epidemiological studies in Seychelles on prenatal exposure through fish consumption did not evidenced adverse effects on memory when analyses were performed at 22 and 24 years (Van Wyngaarden et al., 2017), whereas similar experiments made in the Faroe Islands revealed dysfunctions in language, attention and memory at 7 years (Grandjean et al., 1997). And a clear association was observed between mercury cord blood level and memory deficit (Grandjean et al., 1997; Debes et al., 2006). Castoldi and coworkers (2008) proposed that modulating factors, such as diet, nutrition, gender, pattern of exposure and co-exposure could explain the discrepancies of these epidemiological studies. Nevertheless, there are experimental evidences showing that the neurocognitive domain, in particular dentate gyrus, hippocampus and cortex are susceptible to the neurotoxicity of mercury in the developing brain (Sokolowski et al., 2011, 2013; Ceccatelli et al., 2013); therefore, we focus on impairment in learning and memory as the AO. Some –SH- or –SeH-containing proteins involved in protection against oxidative stress have been demonstrated to be inhibited by MeHg either in vitro or in vivo, but a causal relationship has not been established between these inhibitory effects and the final pathological events (Oliveira, 2017). However, the analysis of the essentiality of the KEs and of the weight of evidence for the KERs supports a plausible mechanistic link between the MIE and the AO.

This AOP is mainly focused on the developmental period, although it cannot be excluded that long-term exposure in adult may trigger a similar cascade of KEs leading also to impairment in learning and memory, as observed in neurodegenerative diseases such as Alzheimer's disease (Mutter et al., 2004). While no specific sex differences have been analyzed/described for most KEs, Curtis and coworkers (2010) observed a higher level of TNF-a in hippocampus of male prairie wolf than in female, both treated for 10 weeks with inorganic mercury, in the form of HgCl2; whereas Zhang and coworkers (2013) found a higher neuroinflammatory response associated with altered social behavior in female mice offspring than in male, following gestational exposure to HgCl2. However, after developmental methylmercury exposure, long-lasting behavioral alterations were more prominent in males (Ceccatelli et al., 2013; Castoldi et al., 2008b). These discrepancies may be due to sex differences in kinetics or susceptibility (Vahter et al., 2006).

Dose-response and temporal concordance of KEs

There is no study where all KEs are measured simultaneously after exposure to several doses, impeding a dose-response and concordance analysis. In one single study (in blue in the table), three downstream KEs were measured following pre-natal exposure to methylmercury. Comparisons of all animal studies show that doses used are ranging from 0.5 - 5 mg/kg; but dose-response was seldom performed. In these studies, the time (pre-natal, post-natal, lactation,...) and duration of exposure are quite diverse and no analysis of brain mercury content was made, so it is not possible to compare doses between studies. Therefore, based on the present data, it is impossible to define whether KEs up occur at lower doses and earlier time points than KEs down.

For in vitro studies, KEs up are often measured after acute exposure to high concentrations.

The following table summarizes concentrations/doses, time, and duration of exposure for the various test systems and KEs.

Biological Plausibility and Empirical Support of the KERs

Some quantitative relationships have been described between the upstream early KEs (MIE, oxidative stress, Cell injury/death), although the diversity of test systems and posology (dosing/exposure amount and duration) hampers comparison between studies. It is more difficult to evaluate quantitative relationships between later downstream KEs, such as Neuroinflammation and Decreased Network Function. Neuroinflammation is a complex adaptive mechanism which is not yet completely understood; it can have neuroprotective or neurodegenerative consequences, depending on triggering signals, duration, microenvironment or other unknown influences, which may determine the outcome of the neuroinflammatory process. Decreased network function is currently difficult to quantify because quantitative technologies for mapping and understanding of brain networks (and their plasticity) are still under development.

Optimally, we would like data from a single type of test system showing that exposure to stressor, e.g. mercury, is correlated with changes in all KEs. Such models are emerging, using cells of human origin (Pamies et al., 2016; Sandström et al., 2017b; Fritsche et al., 2017) and/or non-mammalian models, such as zebrafish (Geier et al., 2018; Padilla et al., 2018) and will allow in the future generation of quantitative data which may be used for in silico hazard prediction.

Bridges, K., Venables, B., Roberts, A., 2017. Effects of dietary methylmercury on the dopaminergic system of adult fathead minnows and their offspring. Environ Toxicol Chem 36, 1077-1084.

Morris, G., B. K. Puri, R. E. Frye and M. Maes (2017). "The Putative Role of Environmental Mercury in the Pathogenesis and Pathophysiology of Autism Spectrum Disorders and Subtypes." Mol Neurobiol.

Ruszkiewicz, J. A., A. B. Bowman, M. Farina, J. B. T. Rocha and M. Aschner (2016). "Sex- and structure-specific differences in antioxidant responses to methylmercury during early development." Neurotoxicology 56: 118-126.