Aflatoxin B1 (AFB1) can be oxidized to a variety of metabolites, many of which can be further metabolized, for example by conjugation with glutathione (GSH) via Glutathione-S-transferase (GST). In order for DNA binding and formation of a pro-mutagenic DNA adduct to occur, AFB1 must be metabolized via Cytochrome P450 metabolism to a specific highly reactive form of AFB1, the exo-epoxide AFB1-8,9-epoxide. CYP3A4 forms the exo-form of this reactive epoxide only. CYP1A2, inducible in liver, forms both the exo- and the endo-epoxides; in human liver, CYP1A2 metabolism occurs with a lower Vmax (enzymatic rate) and higher Km (half-maximal concentrations) than CYP3A4 (Degen and Neumann,1981; Groopman and Kensler, 2005; Guengerich et al., 1996; Ueng et al., 1995). Figure 1, from Pottenger et al., 2014, depicts the metabolism of AFB1.

Metabolic activation of AFB1 occurs mainly in the liver, where the highest levels of the CYP isozymes are located. Competitive metabolism with other hepatic and extra-hepatic P450 isozymes may decrease the proportion of the specific metabolite, AFB1-8,9-epoxide; this can reduce the effectiveness of hepatic activation of AFB1. Alternatively, induction of either hepatic or extra-hepatic GST activity can reduce the levels of AFB1-epoxide available for reaction with DNA by increasing conjugation of the epoxide with GSH. This conjugation renders the epoxide inactive and directs it towards eventual elimination (Guengerich et al., 1996). 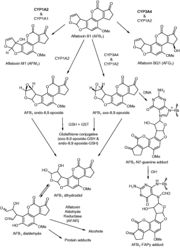 Metabolic activation of AFB1 occurs at the intracellular level, with sub-cellular organelles involved due to the localization of CYP450 in the endoplasmic reticulum, coupled with the epoxide hydratase; GST is localized in the cytosol (Guengerich et al., 1996). Organ architecture also plays a role, as the structure of the liver is orientated around the O2 gradient set by the portal artery and hepatic vein; hepatocytes nearest the portal artery demonstrate increased tissue oxygen while those around the portal vein have decreased tissue O2 and correspondingly higher levels of CYP450 activity.

Evidence for Chemical Initiation of this Initial Molecular Event

Pre-MIE: There is an extensive database on AFB1 in many different systems demonstrating formation of the AFB1 exo-epoxide. This database includes several mammalian species (humans, non-human primates, rats, mice) in addition to birds (turkeys) and fish (Eaton and Gallagher, 1994; IARC, 1993).

Many studies show that in the absence of AFB1 metabolic activation, tumors do not occur. Treatment of rats with the CYP450-inhibitor and GST-inducer oltipraz reduces the levels of AFB1 DNA adducts by 65-70%, and the later-forming altered hepatic foci (AHF) and liver tumors are also reduced by 97 and 100%, respectively; thus, no hepatocellular carcinomas (HCC) form in the oltipraz-treated rats dosed with AFB1 (Roebuck et al., 1991). More recent data show even more effective prevention of tumors and of hepatic foci in rats pre-treated with a triterpenoid, 1-[2-cyano-3-,12-dioxooleana-1,9(11)-dien-28-oyl]imidazole (CDDO-Im) (Johnson et al., 2014). The pre-treated rats were reported with a 70% reduction of AFB1-induced adducts in urine but had 100% inhibition of tumors, and only 1 rat out of 23 pre-treated had any altered hepatic foci (AHF). There are similar data in humans treated with oltipraz. Kensler et al. (1998) report a significant reduction in a biomarker of exposure AFB1-induced albumin adducts, supporting the human relevance of this metabolic activation

Another line of evidence for essentiality of the pre-MIE is the recognized difference in sensitivity to AFB1-induced liver tumors between mice and rats (Degen and Neumann, 1981). Mice, have considerably increased metabolic activation of AFB1 to the exo-epoxide compared to rats; mice are nonetheless much less sensitive to AFB1-induced liver tumors. It is thought that this difference is due to the constitutive presence of GST-alpha activity in mice vs rats, where this activity is not found.

Formation of the exo-epoxide can be produced with in vitro systems and detected using techniques for structural quantitation of AFB1 metabolites (Himmelstein et al., 2009), including liquid chromatography coupled with tandem mass spectrometry (LC-MS/MS). By using subcellular fractions (e.g., microsomes), cellular homogenates, or cells in culture, it is possible to measure formation of AFB1 exo-epoxide. Such data can also be collected from in vivo systems; samples of plasma or blood from AFB1-treated animals can be analyzed for the AFB1 exo-epoxide with similar mass spectrometric based detection systems (e.g., LC-MS/MS). Samples of blood from humans in AFB1-endemic regions have demonstrated presence of AFB1-albumin adducts, which are formed from the AFB1 exo-epoxide. AFB1-treated animals may also provide tissue samples for analysis of AFB1 exo-epoxide. Special trapping techniques may be required as the reactive AFB1 exo-epoxide metabolite has a short half-life in biological matrices.

Ample data across phyla demonstrate metabolic activation of AFB1 to the exo-epoxide via CYP450. These taxons include several mammalian species (humans, non-human primates, rats, mice) in addition to birds (turkeys) and fish (Eaton and Gallagher, 1994; IARC, 1993).

The metabolic information above is applicable to all mammalian systems evaluated; it is also applicable to certain birds such as turkeys (Gregory et al., 1983; IARC, 1993). Humans, non-human primates, rats, mice, poultry and fish have all demonstrated susceptibility to AFB1-induced liver tumors (Asplin and Canaghan, 1961; Eaton and Gallagher, 1994). Species that preferentially metabolize AFB1 to the exo-8,9-epoxide are more susceptible to AFB1 carcinogenicity. Sulfation by GST enzymes or other enzymatic detoxification of AFB1 metabolites can reduce available levels of the exo-epoxide, and subsequent steps or even the progression of Key Events may not occur in these species. Mice are less susceptible to AFB1-induced cancer than rats, likely due to increased detoxification (Monroe and Eaton, 1987). This increased detoxication capability can also be instigated by dietary exposures to compounds that modulate CYP450 expression or modify detoxication activities (Elegbede and Gould, 2002; Primiano et al., 1995; Roebuck et al. 1991, 2003; Kensler et al., 1998; Wang et al., 1999; Yates et al., 2006).

Degen GH, Neumann HG (1981). Differences in aflatoxin B1-susceptibility of rat and mouse are correlated with the capability in vitro to inactivate aflatoxin B1-epoxide. Carcinogenesis 2:299–306.

Larsson P, and Tjalve H. (1993). Distribution and metabolism of aflatoxin B1 in the marmoset monkey (Callithrix jacchus). Carcinogenesis, 14, 1–6.

Monroe DH, Eaton DL. (1987). Comparative effects of butylated hydroxyanisole on hepatic in vivo DNA binding and in vitro biotransformation of aflatoxin B1 in the rat and the mouse. Toxicol Appl Pharmacol, 90, 401–409.