Ionizing energy can traverse matter to induce biological damage. Tissue regions and cell types that are within depths of the traversable energy particles then have a higher likely hood of becoming transformed into malignant tumours (NRC 1990; Axelson 1995; Jostes 1996; NRC 1999; Kendall and Smith 2002; Al-Zoughool and Krewski 2009; Robertson et al. 2013). This multistep process is initiated by ionizations within the cell (L.E. Smith et al. 2003; Christensen 2014). If these ionizations hit DNA molecules, DNA damage is incurred, possibly in the form of double-strand breaks (DSBs) (J. Smith et al. 2003; Okayasu 2012; Lomax et al. 2013; Rothkamm et al. 2015). Inadequately repaired DNA damage could further lead to mutations and chromosomal aberrations (CAs), which often accumulate in the cell and disrupt the cellular dynamic. If these aberrations affect critical genes involved in the control of cell-cycle checkpoints it can promote uncontrolled cellular proliferation. An abnormally high rate of proliferation in cells of the respiratory tract can lead to lung  tumourigenesis (Bertram 2001; Vogelstein and Kinzler 2004; Panov 2005; Hanahan and Weinberg 2011). Radon gas exposure at high levels is especially linked to carcinogenesis of the lung (Axelson 1995; Miller et al. 1996; NRC 1999; Kendall and Smith 2002; Al-Zoughool and Krewski 2009; Robertson et al. 2013).

There is strong biological plausibility for the association between the direct deposition of energy by ionizing radiation and lung cancer incidence. The majority of the evidence is drawn from studies using radon gas as the stressor. Radon, a radioactive noble gas, is considered to be the second leading cause of lung cancer, behind smoking (Robertson et al. 2013; Rodríguez-Martínez et al. 2018)(Axelson 1995; Miller et al. 1996; NRC 1999; Kendall and Smith 2002; Al-Zoughool and Krewski 2009; Robertson et al. 2013). Deposited energy from radiation in the form of particles can enter the body most often through inhalation (NRC 1999; Kendall and Smith 2002).  These particles can deposit onto lung tissue and decay, producing harmful radiation (Axelson 1995; NRC 1999; Kendall and Smith 2002; Al-Zoughool and Krewski 2009). The radiation can ionize molecules within the cell and initiate the process of lung cancer. There are numerous reviews available detailing the molecular biology involved in lung carcinogenesis (Zabarovsky et al. 2002; Danesi et al. 2003; Massion and Carbone 2003; Panov 2005; Sher et al. 2008; Brambilla and Gazdar 2009; Eymin and Gazzeri 2009; Sanders and Albitar 2010; Larsen and Minna 2011; Santos et al. 2011) and discussing potential therapeutic options for lung cancer patients (Danesi et al. 2003; Massion and Carbone 2003; Sher et al. 2008; Eymin and Gazzeri 2009; PhD and MD 2011; Santos et al. 2011). Briefly there are three cellular steps: initiation, promotion and progression (reviewed by Gilbert 2009).  Initiation refers to the interaction between the cell and the cancer-inducing agent, in this case ionizing radiation. The end-result of this interaction is irreversible genetic change(s) (NRC 1990; Pitot 1993). This, in turn, may lead to malfunctions in various pathways and, as the cell continues cycling, increasing genomic instability (NRC 1990). The promotion phase occurs when a promotor is applied to the irradiated cells and reversibly alters gene expression in an epigenetic fashion (NRC 1990; Pitot 1993), often by binding to its respective receptor (Pitot 1993). The promotor is not carcinogenic if applied alone, but it is capable of enhancing the oncogenic effect of the radiation (NRC 1990). For example, phorbol ester 12-O-tetradecanoylphorbol-13-acetate (TPA) is often used as a promotor and was shown to enhance the oncogenic effects of X-ray radiation when applied to C3H/10T½ cells in culture (Kennedy et al. 1978). In some cases, if the dose of the initiator is high enough, the promotion phase may be bypassed altogether (NRC 1990; Pitot 1993). The final irreversible stage of carcinogenesis is progression, which can be boosted by radiation exposure. This is defined as the point at which the benign tumour becomes malignant due to an accumulation of genetic abnormalities, including mutations and chromosomal aberrations. At this point, the tumour grows rapidly due to high rates of cell proliferation, and the levels of genomic instability continue to increase (NRC 1990; Pitot 1993).

There is strong empirical evidence supporting the relationship between direct deposition of energy by ionizing radiation and the development of lung cancer. The evidence presented below is summarized in table 12, here (click link). Biologically based mechanistic models of carcinogenesis have been developed that describe the complex process of maliginancy (Ruhme et al.2017, Luebeck et al. 1999). There is a vast number of reviews that provide evidence of this association (Axelson 1995; Jostes 1996; NRC 1999; Kendall and Smith 2002; Al-Zoughool and Krewski 2009; Robertson et al. 2013; Sheen et al. 2016).. Overall, there is strong empirical evidence available supporting dose and incidence concordance, strong epidemiological data, and strong support for temporal concordance.

Figure 1: Plot of studies (y-axis) against equivalent dose (Sv) used to determine the empircal link between direct deposition of energy and increased rates of lung cancer. The y-axis is ordered from low LET to high LET from top to bottom. 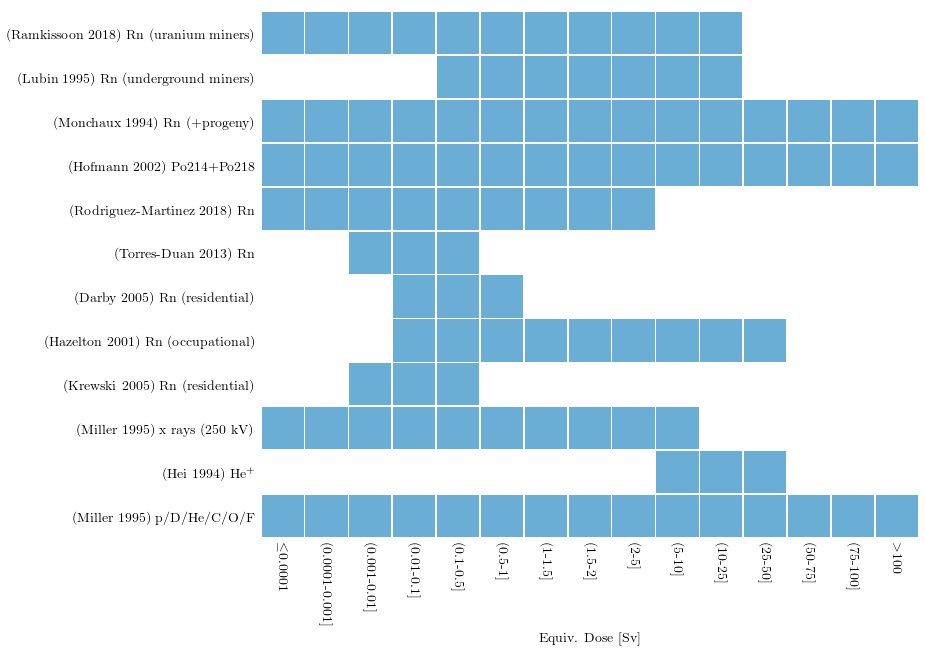 Figure 2: Plot of studies (y-axis) against time over which studies were conducted for a temporal response used to determine the empircal link between direct deposition of energy and increased rates of lung cancer. The y-axis is ordered from low LET to high LET from top to bottom. 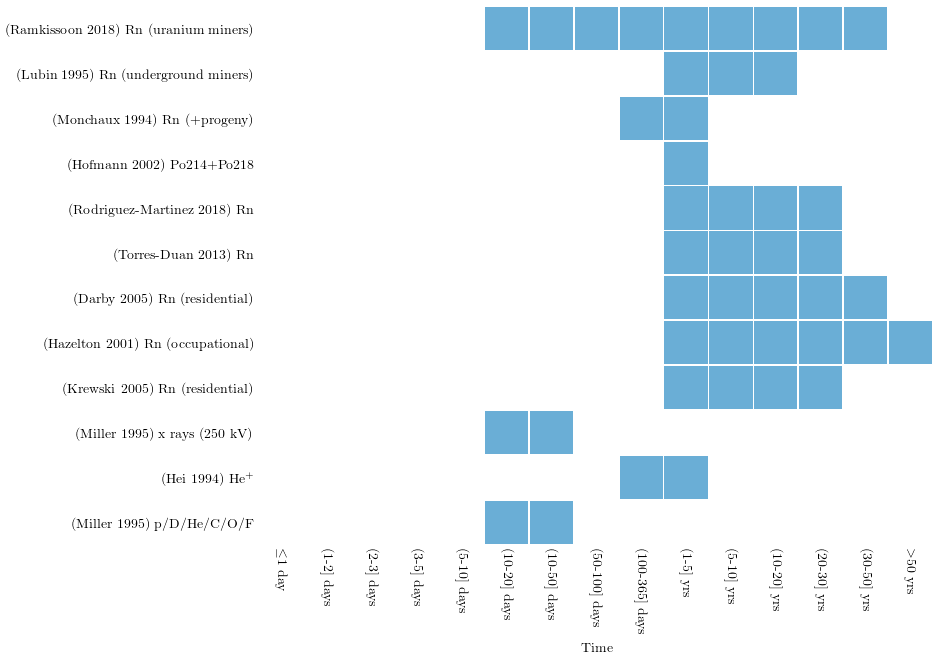 There are numerous studies available that provide evidence supporting a dose/incidence concordance between the direct deposition of energy by ionizing radiation and the incidence of lung cancer. Several in vitro studies showed that cells could be induced to obtain oncogenic characteristics through radiation exposure (Hei et al. 1994; Miller et al. 1995); these oncogenic transformations also increased in a dose-dependent manner in some cases (Miller et al. 1995). Likewise, irradiation of rats at levels comparable to those experienced by uranium miners (25 - 3000 WLM of radon and its progeny) resulted in a dose-dependent increase in lung carcinoma incidence (Monchaux et al. 1994). Furthermore, a simulation model was developed that predicted an increased probability of a lung tumour after exposure to radiation doses ranging from 0 - 800 WLM (Hofmann et al. 2002). Munley et al. ( 2011) exposed  bi-transgenic CCSP-rtTA/Ki-ras mice 80–160 mGy and showed staistically significant increase in  the frequency of lung cancer incidence with a higher number in females.

In terms of outdoor radon exposure, most data is derived from studies of lung cancer in miners occupationally exposed to radon. Overall, there seems to be a positive association between radon exposure and lung cancer risk. This was evident in a cohort of uranium miners who worked in mines in Ontario, Canada between 1954 and 1996 (Ramkissoon et al. 2018); in tin miners from Yunnan, China followed from 1976 - 1988 (Hazelton et al. 2001); and in a pooled analysis of underground miners of various nationalities from 11 cohort studies (Lubin et al. 1995).  Furthermore, a section of a review paper that examined epidemiological studies of radon-exposed miners found a positive, statistically significant association between radon exposure and lung cancer risk in all studies examined (Al-Zoughool and Krewski 2009, UNSCEAR 2006).

The association between lung cancer risk, and radon exposure was further fortified by a large systematic review that synthesized results from 16 studies of both indoor and outdoor exposure. This systematic review analysed results from studies of miners, pooled population studies and case control studies. Overall, there was a positive association found between radon exposure and SCLC risk (Rodríguez-Martínez et al. 2018).  Results from these epidemiological studies suggest that radon exposure is linked to lung carcinogenesis, whether people are exposed indoors or outdoors.

There is empirical evidence supporting that the direct deposition of energy by ionizing radiation precedes the development of lung cancer. In cells that were oncogenically transformed by irradiation, the oncogenic characteristics were detected weeks after the irradiation (Hei et al. 1994; Miller et al. 1995). Similarly, tumours induced in nude mice by inoculation with oncogenic cells took months to grow (Hei et al. 1994), while lung cancer in rats exposed to radon were not detected for months to years (Monchaux et al. 1994). In humans, the risk of lung cancer was also found to increase with increasing time since exposure (Hazelton et al. 2001) and with longer periods of exposure (Lubin et al. 1995). In addition, the lung cancer simulation model developed by Hofmann (2002) was based on an average radiation exposure time of 4 years.

There are many epidemiological studies available that provide quantitative data linking radiation exposure with lung cancer risk, incidence and/or death. Results from several of these studies are summarized in the table below.

There is some quantitative data available regarding the time scale between radiation exposure and the development of lung cancer. In vitro oncogenic transformations were evident 6 weeks after cells were irradiated with X-rays or charged particles of varying LETs (Miller et al. 1995). Similarly, irradiated, tumourigenic bronchial epithelial cells were able to induce tumour growth within 13 weeks of injection into nude mice; tumours reached a size of 0.6 - 0.7 cm by 6 months post-inoculation. In comparison, unirradiated implanted cells did not induce tumour growth (Hei et al. 1994). Epidemiology studies also suggest that lung cancers are detected years after exposure to radiation (Lubin et al. 1995; Darby et al. 2005; Torres-Durán et al. 2014; Rodríguez-Martínez et al. 2018; Ramkissoon et al. 2018). Exposure to radon for longer periods of time predicts an increased relative risk of lung cancer; this risk increased with increasing duration of exposure over 5, 10 and 20 years (Lubin et al. 1995). In a study of tin miners, there were sharp increases in risk at approximately 40 years since first exposure and approximately 40 years since last exposure (Hazelton et al. 2001).

There are several agents, summarized in the NRC 1990 report, that may affect radiation-mediated oncogenic transformations/carcinogenesis. Some agents can enhance the effects of radiation to increase the accumulation of oncogenic characteristics. These include hydroxyurea and 12-O-tetradecanoyl-phorbol-acetate (TPA) (NRC 1990). The effects of hydroxyurea were seen within 11 hours of treatment (Hahn et al. 1986), while the effects of TPA were evident both immediately following irradiation, and up to 96 hours post-irradiation (Kennedy et al. 1978). Other agents may reduce the effectiveness of radiation-induced malignant transformations. Suppressors of radiation-mediated oncogenic transformations include antipain (a protease inhibitor), selenium, and 5-aminobenzamide. Hormone levels may also have an effect on the radiation-carcinogenesis relationship. For example, high levels of thyroid hormone T3 worked synergistically with radiation to enhance oncogenic characteristics, while low T3 levels antagonized the effects of radiation (NRC 1990).

The domain of applicability for this KER is multicellular organisms that possess lungs.