It is well documented that binding of an inhibitor to CI inhibits its activity (see MIE). Naturally occurring and synthetic CI inhibitors have been shown to inhibit the catalytic activity of CI, leading to partial or total inhibition of its activity in a dose response manner (Degli Esposti and Ghelli, 1994; Ichimaru et al. 2008; Barrientos and Moraes, 1999; Betarbet et al., 2000). Indeed, binding of inhibitors stops the electron flow from CI to ubiquinone. Therefore, the Fe-S clusters of CI become highly reduced and no further electrons can be transferred from NADH to CI. This leads to the inhibition of the NADH oxido-reductase function, i.e. CI inhibition.

The weight of evidence supporting the relationship between binding of an inhibitor to NADH-ubiquinone oxidoreducatse and its inhibition is strong.

There is an extensive understanding of the functional relationship between binding of an inhibitor to NADH-ubiquinone oxidoreductase (CI) and its inhibition. As the first entry complex of mitochondrial respiratory chain, CI oxidizes NADH and transfers electrons via a flavin mononucleotide cofactor and several Fe-S complexes to ubiquinone. The electron flow is coupled to the translocation of protons from the matrix to the intermembrane space. This helps to establish the electrochemical gradient that is used to fuel ATP synthesis (Greenamyre et al., 2001). If an inhibitor binds to CI, the electron transfer is blocked. This compromises ATP synthesis and maintenance of Δψm, leading to mitochondrial dysfunction. As CI exerts a higher control over oxidative phosphorylation in synaptic mitochondria than in non-synaptic mitochondria in the brain (Davey and Clark, 1996), specific functional defects observed in PD may be explained. It is well documented that CI inhibition is one of the main sites at which electron leakage to oxygen occurs. This results in a production of ROS, such as superoxide (Efremov and Sazanow, 2011) and hydrogen peroxide, which are main contributors to oxidative stress (Greenamyre et al., 2001).

A variety of studies show a significant correlation between binding of an inhibitor to CI and its inhibition, usually measured by the decreased mitochondrial respiration. Different classes of CI inhibitors, such as rotenone, MPP+, piericidin A, acetogenins, pyridaben, and various piperazin derivatives (Ichimaru et al. 2008) have been shown to bind to the ubiquitin site of CI, leading to a partial or total inhibition of oxidoreductase activity in a dose response manner (Grivennikova et al., 1997; Barrientos and Moraes, 1999; Betarbet et al., 2000). The reduction of CI activity is well documented in a variety of studies using isolated mitochondria or cells, as well as in in vivo experiments and in human post mortem PD brains. Usually it is measured by assays described in 2nd Key Event Relationship (KER): Inhibition of complex I leads to mitochondrial dysfunction. It has been shown that binding of rotenone to CI (e.g. Betarbet et al., 2000, Greenamyre et al., 2001) or MPP+ (e.g. Krug et al., 2014; Langston, 1996) can reproduce the anatomical, neurochemical, behavioural and neuropathological features of PD. Therefore, the empirical support for this KER will be mainly based on the experiments performed after exposure to rotenone or MPP+.

It is not clear the number of subunits constituting CI in mammals, as according to the existing literature different numbers are cited (between 41-46) (Vogel et al., 2007a; Hassinen, 2007). The majority of data claims that mammalian CI is composed of 46 (Greenamyre et al., 2001; Hassinen, 2007) or 45 subunits (Vogel et al., 2007a). It is not sure whether there may exist tissue-specific subunits of CI isoforms (Fearnley et al., 2001). It is unclear, which subunit(s) bind rotenone or other inhibitors of CI. Additionally, it is not clear whether CI has other uncharacterized functions, taking into consideration its size and complexity (43-46 subunits vs. 11 subunits of complex III or 13 subunits of complex IV) (Greenamyre et al., 2001). There is no strict linear relationship between inhibitor binding and reduced mitochondrial function. Low doses of rotenone that inhibit CI activity partially do not alter mitochondrial oxygen consumption. Therefore, bioenergetic defects can not account alone for rotenone-induced neurodegeneration. Instead, under such conditions, rotenone neurotoxicity may result from oxidative stress (Betarbet et al., 2000). Few studies used human brain cells/human brain mitochondria. Therefore, full quantitative data for humans are not available.

The binding of different classes of inhibitors (e.g., pesticides, drugs and other toxins) to CI has been determined quantitatively and I50, and KI values are available. Potency relative to that of rotenone has been determined under the same conditions in beef mitochondria or submitochondrial particles using the ratio of the KI values, when they were available (Degli Esposti, 1998; Okun et al., 1999). Rotenone I50 value is defined as 20 nM (Okun et al., 1999).

Example of a quantitative evaluation of concentration-dependent CI inhibition by rotenone (Fig. 1 from Barrientos and Moraes, 1999). 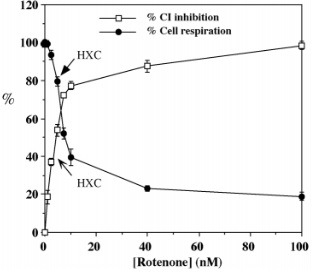 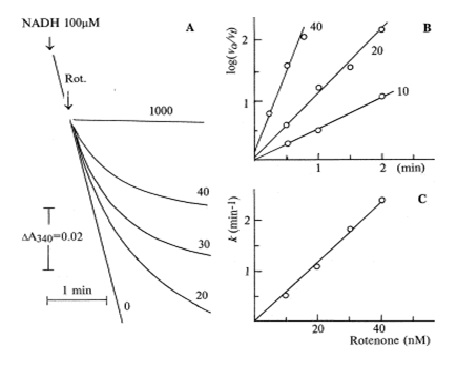 Fig. 2. Panel A and B: Time- and concentration-relationship of NADH oxidase inhibition by rotenone. The numbers on the curves indicate the final concentrations of rotenone (0, 20, 30, 40, 1000 nM). In Panel B: vo, zero-order rate of NADH oxidation in the absence of rotenone; vt, the `instant' values of the rates approximated within 10 s time intervals. Panel C: The dependence of first-order inhibition rate constant on the concentration of rotenone (for further description see Fig. 1 in Grivennikova et al., 1997).

The CI is well-conserved across species from lower organism to mammals. The central subunits of CI harboring the bioenergetic core functions are conserved from bacteria to humans. CI from bacteria and from mitochondria of Yarrowia lipolytica, a yeast genetic model for the study of eukaryotic CI (Kerscher et al., 2002) was analyzed by x-ray crystallography (Zickermann et al., 2015). However, the affinity of various chemicals to cause partial or total inhibition of CI activity across species is not well studied (except rotenone).