This Key Event Relationship describes the indirect link between the Molecular Initiating Event (activation of the AhR) and the Adverse Outcome (increased early life stage mortality).

Interestingly, interference with endogenous AHR functions, either by knock-out or by agonist exposure during early development, causes similar cardiac abnormalities (Carreira et al 2015). Although this is counterintuitive, it demonstrates that the AHR has an optimal window of activity, and deviation either above or below this range results in toxicity.

The predictive ability of an LRG assay measuring induction of AHR1-mediated gene expression in cells transfected with different avian AHR1 expression vectors was demonstrated by linear regression analysis comparing log-transformed LD50 values obtained from the literature to log-transformed PC20 values from the LRG assay (Farmahin et al. 2013b; Manning et al. 2012). PC20 values represent the concentration of DLC that elicited 20% of the TCDD maximal response, and were calculated according to the procedure described in OECD guideline 455 (OECD 2009). LD50 values used in regression analyses were obtained from the literature. As shown in the linear regression analysis (Figure 1), logLD50 values were associated with logPC20 and a significant relationship (R2 = 0.93, p < 0.0001) was observed. Thus, to predict the in ovo LD50 for a given species and DLC, one could use the species’ AHR1 LBD sequence to design an AHR1 expression vector, measure the PC20 of the DLC in the LRG assay, and use the regression to obtain an LD50 value. 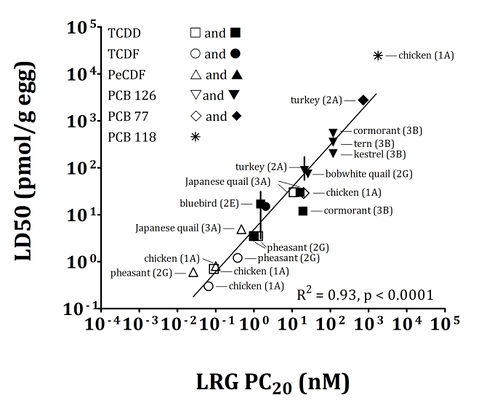 Limited information is currently available across fishes. However, a quantitative model has been developed linking in vitro activation of the AhR2 alpha in transfected COS-7 cells (meaured as concentration to cause 50 % effect; EC50) with early life stage mortality (measured as dose to cause 50 % lethality; LD50) for rainbow trout (Oncorhynchus mykiss) across 6 chemicals with an R2 of 0.81 (Abnet et al 1999). The model is described in detail by Abnet et al (1999). The model is described as:

No quantitative models are currently available for amphibians or reptiles.