PPARα activation in utero leading to impaired fertility in males 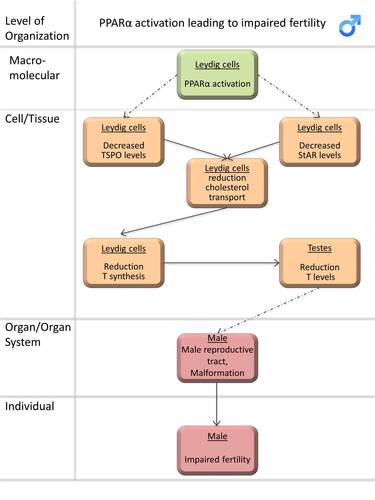 This AOP links the activation of Peroxisome Proliferator Activated Receptor α (PPARα) to the developmental/reproductive toxicity in male. The development of this AOP relies on evidence collected from rodent models and incorporates human mechanistic and epidemiological data. The PPARα is a ligand-activated transcription factor that belongs to the nuclear receptor family, which also includes the steroid and thyroid hormone receptors. The hypothesis that PPARα action is the mechanistic basis for effects on the reproductive system arises from limited experimental data indicating relationships between activation of this receptor and impairment of steroidogenesis leading to reproductive toxicity. PPARs play important roles in the metabolic regulation of lipids, of which cholesterol, in particular, being a precursor of steroid hormones, makes the link between lipid metabolism to effects on reproduction. The key events in the pathway comprise the activation of PPARα, followed by the disruption cholesterol transport in mitochondria, impairment of hormonal balance which leads to malformation of the reproductive tract in males which may lead to impaired fertility. The PPARα-initiated AOP to rodent male developmental toxicity is a first step for structuring current knowledge about a mode of action which is neither AR-mediated nor via direct steroidogenesis enzymes inhibition. In the current form the pathway lays a strong basis for linking an endocrine mode of action with an apical endpoint, a prerequisite requirement for the identification of endocrine disrupting chemicals. This AOP is complemented with a structured data collection which will serve as the basis for further quantitative development of the pathway.


Biological plausibility, coherence, and consistency of the experimental evidence

In the presented AOP it is hypothesized that the key events occur in a biologically plausible order prior to the development of adverse outcomes. The PPARα activators have been shown to alter steroidogenesis and impair reproduction [see reviews (Corton and Lapinskas 2004), (Latini et al. 2008), (David 2006)]. However, there are some conflicting reports on the involvement of PPARα as MIE of the proposed AOP (Johnson, Heger, and Boekelheide 2012), (David 2006). The biochemistry of steroidogenesis and the predominant role of the gonad in synthesis of the sex steroids are well established. Steroidogenesis is a complex process that is dependent on the availability of cholesterol in mitochondria. Perturbation of genes responsible for cholesterol transport and steroidogenic enzyme activities in the Leydig cell will lead to a decrease in testicular testosterone (T) production. As a consequence, androgen-dependent tissue differentiation/development is adversely affected. The physical manifestation of this event may be reproductive tract malformation and possibly leads to impaired fertility.

This is a qualitative description of the pathway; the currently available studies provide quantitative information on dose-response relationships only partially. Experimental data are based on exposure to phthalates and indicate that key events of this pathway occur at similar dose levels. The effects of altered gene expression levels that are responsible for the cholesterol transport into the Leydig cells were shown at >50 mg/kg/bw, a dose at which foetal T was decreased and anatomical malformations (hypospadias) were produced (Mylchreest, Cattley, and Foster 1998), (Mylchreest 2000), (Akingbemi 2001), (Lehmann et al. 2004). Tailored experiments are required for the exploration of quantitative linkages.

Temporal concordance among the key events and the adverse outcome

This AOP bridges two life stages: the AOs are results of the chemical exposure during a critical prenatal period for male development, the masculinization programming window (MPW), within which androgens must act to ensure the correct development of the male reproductive tract (Welsh et al. 2008). Therefore, the AOP focuses on the exposures within the MPW (15.5–18.5 GD days in rats). The temporal relationship of exposure to gestation day has been investigated using phthalates and it has been demonstrated that the gestational timing of exposure is important for the production of the adverse effects on the male reproductive tract (reviewed in (Ema 2002)). Moreover, the temporal relationship between alterations of gene expression and changes in testosterone production has been investigated for phthalates (DBP) (Lehmann et al. 2004), (Thompson et al. 2005). Initial increases in gene expression are followed by decreases in the expression of genes which are associated with steroidogenesis. The observed decreased steroidogenesis and subsequent decrease in testosterone levels is well established as precursors to anatomical changes in the developing male reproductive tract. Thus, those key events of gene expression are temporally consistent with subsequent events, however complete temporal concordance studies are missing.

Strength, consistency, and specificity of association of adverse effect and initiating event

The strength of the chosen chemical initiators as PPARα activators was shown to partially correlate with their ability to act as a male reproductive toxicant (Corton and Lapinskas 2004). The presented key events leading to a decrease in steroidogenesis are plausible and consistent with the observed effects. There is coherence between decreased testosterone synthesis and malformations.

The inhibitory effect of PPARα activation seems to be attributable to an impairment of the multistep process of cholesterol mobilization, transport into mitochondria, and steroidogenesis leading to impaired androgens production. Therefore, it is plausible that several other mechanisms may contribute to/synergise with this AOP. For example, activation of other isoforms of PPARs (PPARβ/δ or/and γ) is hypothesised to be relevant for the pathway (Lapinskas et al. 2005), (Shipley and Waxman 2004).

Moreover, there are contradicting reports as to the presence of PPARγ in the foetal testes (Hannas et al. 2012). Few others transcription factors involved in regulation of lipid metabolism are hypothesized to mediate effects on fetal Leydig cell gene expression like sterol regulatory element–binding protein (SREBP) (Lehmann et al. 2004), (Shultz 2001), CCAAT/enhancer-binding protein-β (CEBPB) (Kuhl, Ross, and Gaido 2007) or NR5A1 (also known as steroidogenic factor 1; Sf1) (Borch et al. 2006). The downstream effects in the pathway might be due to the constellation of earlier events in fetal Leydig cells leading to decrease testosterone production and connected adverse outcomes. Alternative/synergistic MIEs relating to this pathway are hypothesised in the KER description. At present there are no strong views on the other possible MIEs.

The major uncertainty in this AOP is the functional relationship between (MIE) PPARα activation leading to cholesterol transport reduction; possible mechanisms have been proposed but strong experimental support is missing and some conflicting data are reported. The dose response data to support this relationship are lacking. Studies exploring the role of PPARα using PPARα knockout mice showed that prenatal exposure to phthalates caused developmental malformations in both wild-type and PPARα knockout mice, thus suggesting a PPARα-independent mechanism. However, it is difficult to draw any conclusion on the role of PPARα in phthalate-related reproductive toxicity since the intrauterine administration of phthalate (DEHP) occurred before the critical period of reproductive tract differentiation (Peters et al. 1997). Intrauterine DEHP-treated PPARα-deficient mice, developed delayed testicular, renal and developmental toxicities, but no liver toxicity, compared to wild types, thus confirming the early observation by Lee et al. about the PPARα dependence of liver response and, more importantly, indicating that DEHP may induce reproductive toxicity through both PPARα-dependent and -independent mechanism (Ward et al. 1998). PPARα-independent reproductive toxicity observed by Ward et al. may conceivably be mediated by other PPAR isoforms, such as PPARβ and PPARγ, or by a non-receptor-mediated organ-specific mechanism (Barak et al. 1999). Other studies showed that the administration of DEHP resulted in milder testis lesions and higher testosterone levels in PPARα-null mice than in wild-type mice (Gazouli 2002). A more recent report, investigating the role of PPARα, showed decreased testosterone levels in PPARα(−/−) null control mice, suggesting a positive constitutive role for PPARα in maintaining Leydig cell steroid formation (Borch et al. 2006).

Data Gaps: Complete/pathway driven studies to investigate the effects of PPARs and their role in male reproductive development are lacking. For establishing a solid quantitative and temporal coherent linkage, mode of action framework analysis for PPAR α mediated developmental toxicity are needed. This approach has been applied for the involvement of PPAR α in liver toxicity (Corton et al. 2014), (Wood et al. 2014).

Empirical information on dose-response relationships between the KEs, are not available, however there are solid empirical data that would inform a computational, predictive model for reproductive toxicity via PPARα activation.

This AOP is relevant for developing (prenatal) male.

The experimental support for the pathway is mainly based on the animal (rat studies). Conflicting reports comes from the studies on mouse. Studies in mice report contradictory results. Recently, studies by Furr et al revealed that fetal T production can be inhibited by exposure to a phthalates in utero (CD-1 mice), but at a higher dose level than required in rats and causing systemic effects (Furr et al. 2014). However there are some earlier reports that chronic dietary administration of phthalates produces adverse testicular effects and reduces fertility in CD-1 mice (Heindel et al. 1989)

This AOP applies to males only.

Table 1 Weight of Evidence Summary Table. The underlying questions for the content of the table: Dose-response Does the empirical evidence support that a change in KEup leads to an appropriate change in KEdown?; Does KEup occur at lower doses and earlier time points than KE down and is the incidence of KEup > than that for KEdown?: Incidence Is there higher incidence of KEup than of KEdown?; Inconsistencies/Uncertainties: Are there inconsistencies in empirical support across taxa, species and stressors that don’t align with expected pattern for hypothesized AOP? n.a not applicable

This AOP is qualitatively described; however it contains also data that may be used for further development of quantitative description.

1. The AOP describes a pathway which allows for the detection of sex steroid--related endocrine disrupting modes of action, with focus on the identification of substances which affect the reproductive system. In the current form the pathway lays a strong basis for linking endocrine mode of action with an apical endpoint, a prerequisite requirement for identification of endocrine disrupting chemicals (EDC).

2. This AOP structurally represents current knowledge of the pathway from PPARα activation to impaired fertility that may provide a basis for development (and interpretation) of strategies for Integrated Approaches to Testing Assessment (IATA) to identify similar substances that may operate via the same pathway related tosex steroids disruptionand effects on reproductive tract and fertility. This AOP forms the starting point on an AOP network mapping to modes of action for endocrine disruption.

3. The AOP could inform the development of quantitative structure activity relationships, read-across models, and/or systems biology models to prioritize chemicals for further testing.