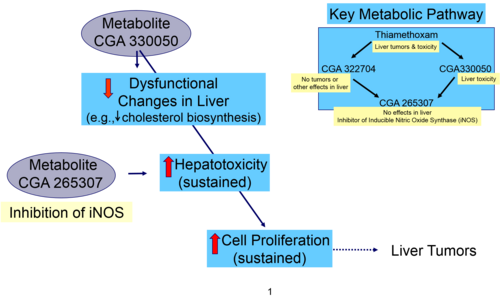 Thiamethoxam is a neonicotinoid insecticide that has been extensively tested in animal models for short- and long-term toxicological effects. An increased incidence of liver tumors was seen in male and female Tif:MAGf mice when fed in the diet for 18 months at concentrations up to 2500 ppm. It is a mouse liver specific carcinogen and does not induce tumors at any other site in the mouse. There were no increases in cancer incidences either in the liver, or at any other site, in rats fed on diets containing up to 3000 ppm thiamethoxam for two years. Thiamethoxam was not genotoxic when evaluated in a battery of in vitro and in vivo assays.

Thiamethoxam is metabolize to two key metabolites, CGA 322704 and CGA 330050. These metabolites can be further metabolize to CGA 265307. Basic toxicity studies on these metabolites give clues to the critical events involved in its mode of action resulting in hepatacarcinogenesis. These metabolites were given at doses to mimic systemic exposure that would result following a tumorigenic dose of Thiamethoxam. When administered directly in the rodent bioassay (rats and mice), the CGA 322704 and CGA 265307 metabolites did not result in any tumors or any other effect in the liver including altered serum cholesterol, liver toxicity, apoptosis, or increased cell proliferation. However, Metabolite CGA 265307 is very structurally similar with substrates and inhibitors of the nitric oxide synthases. Direct exposure to metabolite CGA 330050 did not result in tumors but did result in the same liver toxicity effects as for thiamethoxam. It is proposed that the metabolites CGA 330050 and CGA 265307 are involved in thiamethoxam’s hepatocarcinogensis.


Consider the following criteria (may include references to KE Relationship pages): 1. concordance of dose-response relationships; 2. temporal concordance among the key events and adverse effect; 3. strength, consistency, and specificity of association of adverse effect and initiating event; 4. biological plausibility, coherence, and consistency of the experimental evidence; 5. alternative mechanisms that logically present themselves and the extent to which they may distract from the postulated AOP. It should be noted that alternative mechanisms of action, if supported, require a separate AOP; 6. uncertainties, inconsistencies and data gaps.

The AOP leading to thiamethoxam-induced hepatocarcinogenesis is a species-, time-, dose-, and metabolite-dependent process.

Dose and Temporal Concordance In a 50-week mouse study with thiamethoxam, the earliest change, within one week, was a marked reduction (by up to 40%) in plasma cholesterol. This was followed 10 weeks later by evidence of liver toxicity including increased single-cell necrosis and increased apoptosis. After 20 weeks there was a significant increase in hepatic cell replication rates. All of these changes persisted from the time they were first observed until the end of the study at 50 weeks. Progression of events was consistently seen in several studies of 10, 20, or 50 weeks duration, with the hallmark indicator being a substantial decrease in plasma cholesterol levels [1]. The time-dependent key events occurs in a dose-response relationship that parallels the dose-related, late-life occurrence of tumors in mouse livers [2] and are only found at the carcinogenic dose (i.e., ≥ 500 ppm).

Three metabolites (i.e., CGA 322704 and CGA 330050 which are further metabolize to CGA 265307) were identified and systematically evaluated for toxicological contribution to the sequence of hepatic effects. Mice and rats both produce CGA322704 as a major blood metabolite, which suggests that this particular metabolite is not an indicator of a species difference. However, CGA322704 does not cause liver tumors in mice nor does it cause any of the hepatic changes seen with thiamethoxam, and is thus considered not to be a part of causative chain of hepatic events. In contrast, CGA265307 and CGA330050 are produced in substantially greater quantity by mice than by rats (up to 140-fold and 15-fold greater, respectively), suggesting that the metabolic pathway through CGA330050 is critical to the AOP. In studies where these metabolites were fed to mice for at least ten weeks, CGA330050 was found to induce the same hepatic effects, and to the same degree, as thiamethoxam. CGA265307 alone induced none of the clinical or histopathological changes seen in the thiamethoxam-treated mice.

Strength, Consistency, Specificity of Association All key events are well-defined measured effects with dose response and temporal concordance. The role of specific metabolites and time-dependent progression of hepatic lesions consistently seen including two strains of mice but not in rats. The role of CGA265307 was established by comparing its structural similarity to known inhibitors of inducible nitric oxide synthase (iNOS), by verifying the ability of CGA265307 to inhibit iNOS in vitro, and by assessing the ability of CGA265307 to exacerbate the iNOS-dependent hepatic toxicity of carbon tetrachloride in vivo. Based on structure-activity relationships and in vitro and in vivo experimentation, CGA265307’s role is thought to enhance the relatively mild hepatotoxicity induced by CGA330050, which leads to an increase in cellular death (via necrosis and apoptosis).

Differences in metabolism between mice and rats, the contributory role of specific metabolites, and the time- dependent progression of hepatic lesions were consistently seen in a series of separate studies, including two strains of mice. [3] [4]

Plausibility and Coherence The phenomenon of a non-genotoxic mouse liver specific carcinogen is not uncommon in rodent bioassay studies. [5] Cytotoxicity and consequent regeneration is a well-known and well-documented mode of carcinogenic action for a variety of chemicals and for a variety of tissues including liver in laboratory animals. [6] [7] [8]

Alternative modes of action Genotoxicity, cytohrome P-450 induction, peroxisomal beta oxidation, and oxidative stress were considered experimentally and shown not to be viable.[9]

Confidence in the AOP

Information from this section should be moved to the Key Event Relationship pages!

The coherence and extent of the database on thiamethoxam and its metabolites clearly demonstrates the mode of action for mouse liver tumorigenesis involving hepatocytotoxicity and regenerative cell proliferation [1] [2] The responses seen with thiamethoxam have been reproduced in studies of 50 and 20 weeks duration, the latter in two strains of mouse. The metabolite studies were internally consistent in that CGA330050 is only formed from thiamethoxam and not from the non-carcinogenic metabolite CGA322704. In all of the studies the key events had logical dose and temporal relationships. The metabolite studies were clear and consistent with the known carcinogenicity profiles of thiamethoxam and CGA322704. Studies on the metabolite CGA265307 and the inhibition of inducible nitric oxide synthase were limited, but showed that CGA265307 inhibits iNOS in vitro and enhances the toxicity of carbon tetrachloride in vivo. It is reasonable to conclude that CGA265307, although not toxic alone, could enhance the hepatotoxicity of metabolite CGA330050. Based on comparative metabolic studies neither rats nor humans would produce sufficient level of the two critical metabolites (CGA 330050 and CGA 265307) to initiate the progression of hepatic key events. As a consequence, it is unlikely that humans would be at risk of developing liver tumors as a result of exposure to thiamethoxam.
Cite error: <ref> tags exist, but no <references/> tag was found