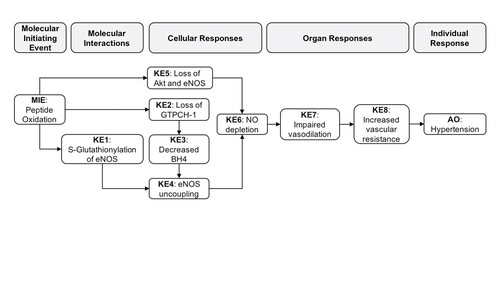 Hypertension is a cardiovascular risk factor that has a profound influence on cardiovascular morbidity and mortality.  While good progress has been made in terms of identifying and managing this risk factor for patient care, methods to assess the potential of chemical compounds to induce hypertension, or to assess the efficacy of consumer products (e.g. e-cigarettes, tobacco heating products) targeted at reducing disease burden remain largely limited to epidemiological associations and in vivo studies.

Here we present the supporting information on an AOP describing how vascular endothelial peptide oxidation leads to hypertension via perturbation of endothelial nitric oxide (NO) bioavailability.  The molecular initiating event is oxidation of amino acid (AA) residues on critical peptides of the NO pathway, notably protein kinase B (AKT), guanosine triphosphate cyclohydrolase-1 (GTPCH-1), endothelial nitric oxide synthase (eNOS), and also the cellular ROS scavenger; glutathione.  Oxidation of the enzymic components of the pathway lead to reduced expression of the phosphorylated proteins, and protein loss via proteasomal degradation. Oxidation of reduced glutathione to GSSG promotes bonding of GSSG to critical AA residues on eNOS, and the reduced expression of GTPCH-1 reduces bioavailability of tetrahydrobiopterin (BH4), both of which lead to uncoupling of eNOS (reduced NO production, increased superoxide production).  The combination of these molecular events lead to reduced bioavailabilty of NO, which in turn reduces the potential for vasodilation and shifts the balance of vascular tone towards vasoconstriction.  Repeated perturbation of this pathway via chronic exposure to toxicants, ultimately increases vascular resistance and contributes towards the development of hypertension.

The evidence supporting the AOP is strong from the molecular level up to impaired vasodilation, however there is a knowledge gap concerning the magnitude of contribution of this mechanism towards the development of hypertension, given the complexity of the disorder.  Further AOPs are likely required to characterise the contribution of competing/promoting mechanisms which alter vascular tone towards chronic vasoconstriction.

With respect to the regulatory context, the AOP is of relevance to the risk assessment of airborne pollutants and other chronically inhaled toxicants which affect vascular endothelial cells. Additionally, acute and chronic exposure to aerosols generated by alternative tobacco products and nicotine delivery devices are poorly understood with respect to their impact on cardiovascular disease risk. Reliable in vitro models and human clinical biomarkers would help to inform regulatory decision-making with respect to understanding the potential cardiovascular health impacts of these novel products.

The motivation for the AOP development, a deeper explaination of the underlying biology, and KE/KER assessments can be found in Lowe et al. 2017.

Originally, "oxidative stress" was proposed as the MIE for this AOP.  Upon discussion with EAGMST, it was suggested to use a term that is more representative of the mechanism of action, hence "peptide oxidation" is proposed instead.  All references to "oxidative stress" within this wiki are made within the context that localised conditions conducive to oxidative damage within the vascular endothelium would trigger the revised MIE, and are limited to the peptide targets named within the AOP; namely GSH, GTPCH1, AKT and eNOS (although other redox sensitive peptides are undoubtedly affected also).

The mechanisms of potentially deleterious peptide oxidation by ROS/RNS are discussed by Berlett and Stadtman (1997) in the context of health effects.  References to "oxidative stress" within this wiki are made with this context in mind.

This proposed AOP is applicable to males and females, however a single study did suggest that KE responses may vary with sex (Scotland et al. 2005).

The AOP is relevant for all life stages, as vascular oxidative stress (a common cause of the MIE) can occur at all life stages.  However, the AO via this mechanism is likely limited to adults, due to a loss of vaso-protective mechanisms with age (a major risk factor) and cardiovascular re-modelling over time.  Hypertension is known to occur in adolescents and children, however the condition can be due to a variety of causes, such as renal disease and cardiovascular complications in early life.  For example, persistant pulmonary hypertension is a consequence of failed pulmonary vascular transition at birth and leads to pulmonary hypertension with shunting of deoxygenated blood across the ductus arteriosus and foramen ovale, resulting in severe hypoxemia.  The condition is improved by administration of nitric oxide by inhalation (Lai et al. 2017).  While the initial cause of the hypertension is not vascular oxidative stress, ROS-mediated perturbations of the vascular endothelium, which arise as a result of the hypoxic conditions, contribute to the development of hypertension, and may have health implications for the neonate later in life (de Wijs-Meijler et al. 2017).  Therefore, the physiology described in the AOP is relevant to the condition, but not strictly causative.

The KEs in this AOP are well-documented and well-studied in humans, cows and rodents.  Similar outcomes are observed across these species following chemical exposure and other phenomena which cause vascular oxidative stress (e.g. hypoxia, ischaemia/reperfusion).

Molecular Initiating Event Summary, Key Event Summary
Provide an overall assessment of the essentiality for the key events in the AOP. Support calls for individual key events can be included in the molecular initiating event, key event, and adverse outcome tables above.

Summary Table
Provide an overall summary of the weight of evidence based on the evaluations of the individual linkages from the Key Event Relationship pages.

Summary Table
Provide an overall discussion of the quantitative information available for this AOP. Support calls for the individual relationships can be included in the Key Event Relationship table above.

Overall, there is a good amount of quantitative data available for this AOP as demonstrated by the weight of evidence tables, which shows that empirical support ranges from weak to strong. Four key event relationships (KERs) have strong quantitative support: decreased AKT/eNOS activity => NO depletion, decreased GTPCH-1 => decreased BH4, decreased BH4 => eNOS uncoupling and eNOS uncoupling => NO depletion. The relationships between these key events are well described in the literature as GTPCH-1 is the rate-limiting enzyme for BH4 synthesis (Wang et al., 2008), BH4 is an essential cofactor for eNOS and function (Wang et al., 2014), and the uncoupling of eNOS causes it to generate superoxide instead of NO (Carnicer et al., 2012). As they are functionally interconnected, many studies measure these key events together; thus providing strong support for their dependency.

In general, experiments with both dose-dependent and temporal response data following a stressor are not readily available for all KERs as most measurements are generally taken at one time point after a perturbation, or the measurements are for one key event, not both. However, an exhaustive literature search was not performed. An ideal experiment would be to treat cells with three to four stressors at increasing concentrations and measure the key events at different time intervals; thus providing a greater understanding of the temporal and dose-dependent responses between the key events.

One of the most widely reported hypertension risk factors is tobacco smoking.  While smoking cessation remains the best way to reduce the harmful effects of tobacco smoking, tobacco harm reduction is being considered by some regulators (e.g. US Food and Drug Administration; FDA) as a complementary strategy to reduce smoking-related disease burden.  The US FDA has published guidance on assessing a “modified risk tobacco product” (MRTP), either through demonstration of reduced toxicant exposure or reduction in health risks (FDA 2012). By gaining an understanding of how, and to what extent tobacco smoke initiates biological mechanisms of hypertension, such knowledge could be utilised as a baseline for comparison purposes in toxicological assessments of the risk reduction potential of e-cigarettes.

Given the wide variety of data requirements to support such risk assessments e.g. human exposure studies, behavioural studies, efficacy studies, in vitro studies, clinical biomarker studies, pharmacokinetic studies, quality of life studies etc., a data integration framework is required to organise these data types into a comprehensive story that (i) characterises the toxicological problem, (ii) demonstrates the likely outcome of an intervention, and (iii) can be utilised to monitor the performance of any intervention over time.  Adverse outcome pathways offer scientists and regulators a way to inform future Integrated Approaches to Testing and Assessment (IATA) for the risk assessment/harm reduction potential of electronic cigarettes and heated tobacco products.

Other applications could include informing risk assessments for long term exposure to airborne pollution, in the context of helping to set acceptable exposure limits in urban environments for specific pollutants e.g. diesel exhuast particles.  Furthermore, health supplements which purport to benefit the cardiovascular system in the context of hypertension risk, could also be assessed for efficacy.