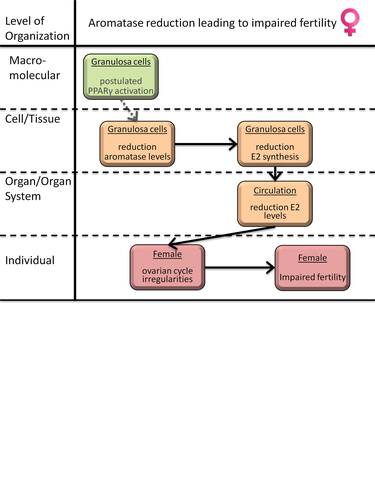 This AOP links activation of the Peroxisome Proliferator Activated Receptorγ (PPARγ) to reproductive toxicity in adult female. The development of this AOP relies on evidence collected from rodent models and incorporates human mechanistic and epidemiological data. The PPARγ is a ligand-activated transcription factor that belongs to the nuclear receptor family, which also includes the steroid and thyroid hormone receptors. Interest in PPARγ action as a mechanistic basis for effects on the reproductive system arises from the demonstrated relationships between activation of this receptor and impairment of the steroidogenesis leading to reproductive toxicity in rodents. PPARs play important roles in the metabolic regulation of lipids, of which cholesterol, in particular being a precursor of steroid hormones, makes the link between lipid metabolism to effects on reproduction. The key events in the pathway comprise the activation of PPARγ, followed by the disruption of the hormonal balance which leads to irregularities of the ovarian cycle that may further be cause of impaired fertility. The PPARγ-initiated AOP to rodent female reproductive toxicity is a first step for structuring current knowledge about a mode of action which is neither ER-mediated nor via direct aromatase inhibition. In the current form the pathway lays a strong basis for linking an endocrine mode of action with an apical endpoint, prerequisite requirement for the identification of endocrine disrupting chemicals. This AOP is complemented with a structured data collection which will serve as the basis for further quantitative development of the pathway.


Biological plausibility, coherence, and consistency of the experimental evidence

In the presented AOP it is hypothesized that the key events occur in a biologically plausible order prior to the development of adverse outcomes. However, the experimental support is derived from a limited number of studies. The PPARγ activators have been shown to alter steroidogenesis, ovarian cycle and impair reproduction [see reviews (Kay, Chambers, and Foster 2013), (Froment et al. 2006), (Peraza et al. 2006), (Latini et al. 2008), (Martino-Andrade and Chahoud 2010), (Lyche et al. 2009), (Lovekamp-Swan and Davis 2003)]. The biochemistry of steroidogenesis and the predominant role of the ovaries in synthesis of the sex steroids are well established. During the reproductive years the ovary is the central organ providing hormones necessary for the communication between the reproductive tract and the central nervous system, assuring normal reproductive function. Hormonal imbalance may lead to irregularities of the ovarian cycle that could be one of many possible events resulting in decrease fertility.

This is a qualitative description of the pathway; the currently available studies provide little quantitative information on dose-response relationships between key events (KEs). The experimental data for selected compounds (phthalates, phenols and parabens) reveals concordance between one KE to the next in the sequence, i.e. that each KE occur at first and on lower dose than the following KE. To establish more reliable and quantitative linkages tailored experiments are required.

Temporal concordance among the key events and the adverse outcome

Most of the gathered evidence relies on the measurement of the effects at the same time point (detailed information captured in KER), thus studies providing evidence for complete temporal concordance are missing.

Strength, consistency, and specificity of association of adverse effect and initiating event

PPARγ-null mutation is embryonically lethal due to a defect in placental development ( PPARγ is necessary for angiogenesis)(Barak et al. 1999). Organ (ovary) targeted knock-out studies are needed to more precisely inform on the mechanistic involvement of the PPAR family in the proposed AOP.

The pathway's weak point lies in the linkages between the initial events in the pathway. However, there is evidence supporting both chemical dependent and independent involvement of PPARγ in the female reproductive function:

3. Antagonist of PPARγ recovered the decrease of aromatase after treatment with MEHP (PPARγ agonist) (Lovekamp-Swan, Jetten, and Davis 2003)

Alternative mechanisms relating to the pathway are described in greater detail in the descriptions of KERs.

StAR was up regulated by PPARγ ligands (rosiglitazone and pioglitazone) in human granulosa cells in vitro (Seto-Young et al. 2007) and by MEHP in rat granulosa cells (Svechnikova, Svechnikova, and Söder 2011). StAR facilitates that rapid mobilization of cholesterol for initial catalysis to pregnenolone by the P450-side chain cleavage enzyme located within the mitochondria ( see review (Payne and Hales 2013)).

Contradictory results were found on the effect of PPARγ ligands on 3β-HSD enzyme. Work on porcine granulosa cells has found that troglitazone competitively inhibits 3β-HSD enzyme activity (Gasic et al. 1998). Opposite results were obtained with another agonist of PPARγ (rosiglitazone) that stimulated 3βHSD protein expression and activity in porcine ovarian follicles (Rak-Mardyła and Karpeta 2014). 3β-HSD catalyses the conversion of pregnenolone to progesterone see review (Payne and Hales 2013)

• 17-alpha-hydroxylase (P450c17, CYP 17) Conflicting reports have arisen regarding the effect of PPARγ agonists on the expression and activity of this enzyme, mRNA production was unchanged following porcine thecal cell exposure to PPARγ ligand (Schoppee 2002), whilst other reports indicate CYP17 expression inhibition by PPARγ (rosiglitazone) agonist in ovarian follicles (Rak-Mardyła and Karpeta 2014). P450c17converts progesterone to androgen see review (Payne and Hales 2013)

Reduced production of estradiol may result from alteration of the enzymes upstream of aromatase (described above) or by increasing estradiol catabolism (altering Cyp1b1 and 17-βHSD IV, which are involved in estradiol conversion to catechol estrogens and estrone respectively).

Agonist of PPARγ (rosiglitazone) was found to inhibit 17β-HSD protein expression in ovarian follicles (Rak-Mardyła and Karpeta 2014), whereas increase in enzyme expression was noted upon treatment of granulosa cells by phthalate (MEHP) (Lovekamp-Swan, Jetten, and Davis 2003). 17β-Hydroxysteroid dehydrogenase (17β-HSD) metabolises estradiol to estrone see review (Payne and Hales 2013). For example, in vitro studies with 2,3,7,8-tetrachlorodibenzo-p-dioxin (TCDD) investigating steroid production in human luteinizing granulosa cells (hLGC) showed estradiol decreased without changing either aromatase protein or its enzyme activity (Morán et al. 2000). Studies by the same laboratory identified P450c17 as a molecular target for endocrine disruption of hLGC specifically decreasing the supply of androgens for E2 synthesis (Morán et al. 2003). Reduced levels of estradiol production may result from increased inactivation of E2 via conversion to estrone as shown in isolated mouse small preantral follicles upon phthalate (MEHP) treatment (Lenie and Smitz 2009) and granulosa cells (Lovekamp-Swan, Jetten, and Davis 2003). Taken together, these findings provide strong evidence for the direct effect of PPARγ agonists on ovarian synthesis and secretion of hormones.

Reduced levels of estradiol and irregularities of ovarian cycle

The impact on ovarian cycle may result from a defect in hypothalamic-pituitary-gonadal (HPG) axis signalling, other than by alteration of estradiol level. MEHP inhibited follicle-simulating hormone (FSH) mediated stimulation of adenylate cyclase and progesterone synthesis in primary cultures of rat granulosa cells (Treinen, Dodson, and Heindel 1990).

The current major uncertainty in this AOP is the basis of the functional relationship between the PPARγ, activation leading to Aromatase (Cyp19a1), reduction in ovarian granulosa cells. The possible mechanisms have been proposed and investigated, however there is lack of dose response and temporal data supporting the relationship (Lovekamp-Swan, Jetten, and Davis 2003), (Fan et al. 2005), (Mu et al. 2001). The pattern of the PPARγ expression in ovarian follicles is not steady, unlike expression of PPARα and δ. This fact adds to the complexity to the interpretation of mechanisms involved in the pathway. The PPARγ is down-regulated in response to the LH surge (C M Komar et al. 2001), but only in follicles that have responded to the LH surge (Carolyn M Komar and Curry 2003). Because PPARγ is primarily expressed in granulosa cells, it may influence development of these cells and their ability to support normal oocyte maturation. PPARγ could also potentially affect somatic cell/oocyte communication not only by impacting granulosa cell development, but by direct effects on the oocyte. Modulation of the PPARγ activity/expression in the ovary therefore, could potentially affect oocyte developmental competence. There is high strength, as well as specificity starting from the association between the reductions of E2 production leading to fertility impairment in females. Consistency of key events in the AOP is supported by several lines of evidence deriving from in vitro and in vivo studies that support PPARγ activation as an important actor in reproductive toxicity in rodents [(Kay, Chambers, and Foster 2013), (Froment et al. 2006), (Peraza et al. 2006), (Latini et al. 2008), (Martino-Andrade and Chahoud 2010), (Lyche et al. 2009), (Lovekamp-Swan and Davis 2003)].

Agonists of PPARγ were found to impact on steroidogenesis; however contradictory data show their effect on different stages of the process as well the direction of the effect(see above). Some in vivo studies also reported two-way effect on the estradiol production by PPARγ agonists. This effect may be attributed to the different measurements during different stages of estrous cycle. The phase of the estrous cycle, in which hormones are measured, may influence the readout of compound effect. In rats treated with DEHP increase in estradiol production was observed in ovarian cells (ex vivo) extracted during diestrus phase, however there was decrease in estradiol when the cells were extracted during estrus stage (Laskey and Berman 1993). In alignment with this result increased levels of estradiol were found in sheep proceeding the estrus phase (Herreros et al. 2013).

Data Gaps: There is a limited number of studies investigating the effect of PPARγ and its role in female reproductive function, in order to establish a more quantitative and temporal coherent linkage of the MIE to the subsequent key events studies are required. For example: the plausible mechanism of activation of a PPARγ, RXR and involvement of NFkappaB and their role in transcriptional repression of the aromatase gene could be investigated in modified transactivation assays to measure NFkappaB repression, rather than transactivation. Similar assays have been already generated, for estrogen receptor-mediated transrepression (Quaedackers et al. 2001).

The experimental support for the pathway is based on rodent models and other mammals (pig, sheep) including human mechanistic and epidemiological data. The experimental animal data are assumed relevant for consideration of human risk.

Table 1 Weight of Evidence Summary. The underlying questions for the content of table: Dose-response: Does the empirical evidence support that a change in KEup leads to an appropriate change in KEdown?; Temporality: Does KEup occur at lower doses and earlier time points than KE down and is the incidence of KEup > than that for KEdown?; Incidence: Is there higher incidence of KEup than of KEdown?; Inconsistencies/Uncertainties: Are there inconsistencies in empirical support across taxa, species and stressors that don’t align with expected pattern for hypothesized AOP?

1. The AOP describes a pathway which allows for the detection of sex steroid-related endocrine disrupting modes of action, with focus on the identification of substances which affect the reproductive system. In the current form the pathway lays a strong basis for linking endocrine mode of action with an apical endpoint, a prerequisite requirement for identification of endocrine disrupting chemicals (EDC). EDCs require specific evaluation under REACH (1907/2006, Registration, Evaluation, Authorisation and Restriction of Chemicals (EU, 2006)), the revised European plant protection product regulation 1107/2009 (EU, 2009) and use of biocidal products 528/2012 EC (EU, 2012).Amongst other agencies the US EPA is also giving particular attention to EDCs (EPA, 1998).

2. This AOP structurally represents current knowledge of the pathway from PPARγ activation to impaired fertility that may provide a basis for development (and interpretation) of strategies for Integrated Approaches to Testing Assessment (IATA) to identify similar substances that may operate via the same pathway related to sex steroids disruption and effects on reproductive tract and fertility. This AOP forms the starting point on an AOP network mapping modes of action for endocrine disruption.

3. The AOP could inform the development of quantitative structure activity relationships, read-across models, and/or systems biology models to prioritize chemicals for further testing.

Payne, Anita H., and Dale B. Hales. 2013. “Overview of Steroidogenic Enzymes in the Pathway from Cholesterol to Active Steroid Hormones.” Endocrine Reviews (July 1).