Direct deposition of ionizing energy refers to imparted energy interacting directly with the DNA double helix and producing randomized damage in the form of strand breaks. Among the different types of damage, the most detrimental type of DNA damage to a cell is the double-strand break (DSB). DSBs are caused by the breaking of the sugar-phosphate backbone on both strands of the DNA double helix molecule, either directly across from each other or several nucleotides apart (Ward, 1988; Iliakis et al., 2015). The number of DSBs produced and the complexity of the breaks is highly dependent on the amount of energy deposited on and absorbed by the cell. This can vary as a function of the dose-rate (Brooks et al., 2016) and the radiation quality which is a function of its linear energy transfer (LET) (Sutherland et al., 2000; Nikjoo et al., 2001; Jorge et al., 2012). LET describes the amount of energy that an ionizing particle transfers to media per unit distance (Smith et al., 2003; Okayasu, 2012a; Christensen et al., 2014).  High LET radiation, such as alpha particle radiation, can deposit larger quantities of energy within a single track than low LET radiation, such as gamma-ray radiation (Kadhim et al., 2006; Franken et al., 2012; Frankenberg et al., 1999; Rydberg et al., 2002; Belli et al., 2000; Antonelli et al., 2015). As such, radiation with higher LETs tends to produce more complex, dense structural damage, particularly in the form of clustered damage, in comparison to lower LET radiation (Nikjoo et al., 2001; Terato and Ide, 2005; Hada and Georgakilas, 2008; Okayasu, 2012a; Lorat et al., 2015; Nikitaki et al., 2016). Thus, the complexity and yield of clustered DNA damage increases with ionizing density (Ward, 1988; Goodhead, 2006).

However, clustered damage can also be induced even by a single radiation track through a cell.

The biological rationale linking the direct deposition of energy on DNA with an increase in DSB formation is strongly supported by numerous literature reviews that are available on this topic (J .F. Ward, 1988; Terato & Ide, 2005; Goodhead, 2006; Asaithamby et al., 2008; Hada & Georgakilas, 2008; Okayasu, 2012b; M. E. Lomax et al., 2013; Moore et al., 2014; Desouky et al., 2015; Sage & Shikazono, 2017; Jeggo, 2009). Ionizing radiation can be in the form of high energy particles (such as alpha particles, beta particles, or charged ions) or high energy waves (such as gamma-rays or X-rays). Ionizing radiation can break the DNA within chromosomes both directly and indirectly, as shown through using velocity sedimentation of DNA through neutral and alkaline sucrose gradients. The most direct path entails a collision between a high-energy particle or photon and a strand of DNA. The high-energy subatomic particles can interact with the orbital electrons of the DNA causing ionization (where electrons are ejected from atoms) and excitation (where electrons are raised to higher energy levels) (Joiner, 2009). These processes ultimately break the phosphodiester backbone.

Additionally, excitation of secondary electrons in the DNA allows for a cascade of ionization events to occur, which can lead to the formation of multiple damage sites (Joiner, 2009). As an example, high-speed electrons will traverse a DNA molecule in a mammalian cell within 10-18 s and 10-14 s, resulting in 100,000 ionizing events per 1 Gy dose in a 10 μm cell (Joiner, 2009). The amount of damage can be influenced by factors such as the cell cycle stage and chromatin structure. It has been shown that in more condensed, packed chromatin structures such as those present in intact cells and heterochromatin, it is more difficult for the DNA to be damaged (Radulescu et al., 2006; Agrawala et al., 2008; Falk et al., 2008; Venkatesh et al., 2016). In contrast, DNA damage is more easily induced in lightly-packed chromatin such as euchromatin, nucleoids, and naked genome DNA (Radulescu et al., 2006; Falk et al., 2008; Venkatesh et al., 2016).

A considerable fraction of DSBs can also be formed in cells through indirect mechanisms.  In this case, deposited energy can split water molecules near DNA, which can generate a significant quantity of reactive oxygen species in the form of hydroxyl free radicals (Ward, 1988; Desouky et al., 2015; Maier et al., 2016). Estimates using models and experimental results suggest that hydroxyl radicals may be present within nanoseconds of energy deposition by radiation (Yamaguchi et al., 2005). These short-lived but highly reactive hydroxyl radicals may react with nearby DNA. This will produce DNA damage, including single-strand breaks and DSBs (Ward, 1988; Desouky et al., 2015; Maier et al., 2016). DNA breaks are especially likely to be produced if the sugar moiety is damaged, and DSBs occur when two single-strand breaks are in close proximity to each other  (Ward, 1988).

Empirical data strongly supports this KER. The evidence presented below is summarized in table 1, here (click link). The types of DNA damage produced by ionizing radiation and the associated mechanisms, including the induction of DSBs, are reviewed by Lomax et al. (2013) and documents produced by international radiation governing frameworks (Valentin, 1998; UNSCEAR, 2000). Other reviews also highlight the relationship between DSB induction and the deposition of energy by radiation, and discuss the various methods available to detect these DSBs (Terato & Ide, 2005; Rothkamm et al., 2015; Sage & Shikazono, 2017). A visual respresentation of the time frames and dose ranges probed by the dedicated studies discussed here is shown in Figures 1 & 2 below.

Figure 1: Plot of example studies (y-axis) against equivalent dose (Sv) used to determine the empircal link between direct deposition of energy and DSBs. The z-axis denotes the equivalent dose rate used in each study. The y-axis is ordered from low LET to high LET from top to bottom. 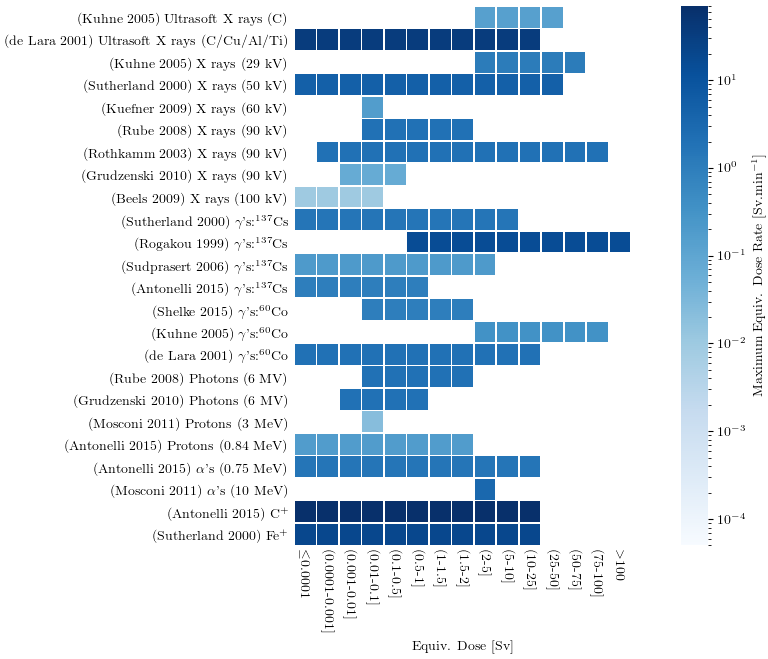 Figure 2: Plot of example studies (y-axis) against time scales used to determine the empircal link between direct deposition of energy and DSBs. The z-axis denotes the equivalent dose rate used in each study. The y-axis is ordered from low LET to high LET from top to bottom. 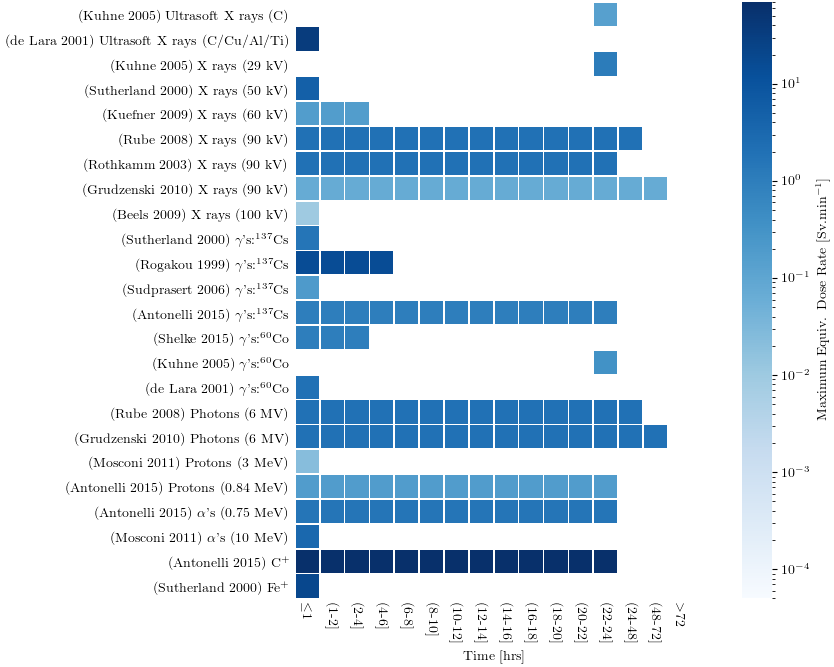 Results from a number of antioxidant studies found that pre-treatment of in vitro and in vivo lymphocytes with various antioxidants resulted in reduced DNA damage in response to radiation exposure (results summarized in a review by (Kuefner et al., 2015)). Similar results were also found in numerous in vitro and in vivo studies using various cell types, rodents, and humans exposed to antioxidants prior to radiation (reviewed by (Smith et al., 2017)). This suggests that deposition of energy on DNA by ionizing radiation is required to produce DNA DSBs.

Quantitative understanding of this linkage suggests that DSBs can be predicted upon exposure to ionizing radiation. This is dependent on the biological model, the type of radiation and the radiation dose. In general, 1 Gy of radiation is thought to result in 3000 damaged bases (Maier et al., 2016), 1000 single-strand breaks, and 40 DSBs (Ward, 1988; Maier et al., 2016) . The table below provides representative examples of the calculated DNA damage rates across different model systems, most of which are examining DNA DSBs.

There is evidence of a response-response relationship between the deposition of energy and the frequency of DSBs. In studies encompassing a variety of biological models, radiation types and radiation doses, a positive, linear relationship was found between the radiation dose and the number of DSBs (Sutherland et al., 2000; de Lara et al., 2001; Rothkamm & Lo, 2003; Kuhne et al., 2005; Rube et al., 2008; Grudzenski et al., 2010; Shelke & Das, 2015; Antonelli et al., 2015; Frankenberg et al., 1999). There were, however, two exceptions reported. When human blood lymphocytes were irradiated with X-rays in vitro, a linear relationship was only found for doses ranging from 6 - 500 mGy; at low doses from 0 - 6 mGy, there was a quadratic relationship reported (Beels et al., 2009). Secondly, simulation studies predicted that there would be a non-linear increase in DSBs as energy deposition increased, with a saturation point at higher LETs (Charlton et al., 1989).

Data from temporal response studies suggests that DSBs likely occur within seconds to minutes of energy deposition by ionizing radiation. In a variety of biological models, the presence of DSBs has been well documented within 10 - 30 minutes of radiation exposure (Rogakou et al., 1999; Rube et al., 2008; Beels et al., 2009; Kuefner et al., 2009; Grudzenski et al., 2010; Antonelli et al., 2015); there is also evidence that DSBs may actually be present within 3 - 5 minutes of irradiation (Rogakou et al., 1999; Rothkamm & Lo, 2003; Rube et al., 2008; Grudzenski et al., 2010). Interestingly, one study that focussed on monitoring the cells before, during and after irradiation by taking photos every 5, 10 or 15 seconds found that foci indicative of DSBs were present 25 and 40 seconds after collision of the alpha particles and protons with the cell, respectively. The number of foci were found to increase over time until plateauing at approximately 200 seconds after alpha particle exposure and 800 seconds after proton exposure (Mosconi et al., 2011).

Some common clinical radiation modifiers include cisplatin, 5-fluorouracil, thiols, and nitroxides (reviewed in (Citrin and Mitchel, 2014)). Clinical approaches have identified many modulating radiation factors, which are often categorized as either sensitizers or protectors. Sensitizers enhance radiation-induced tumour cell killing, and protectors protect normal tissues from the deleterious effects of ionizing radiation (Citrin & Mitchel, 2014).

The domain of applicability relates to all eukaryotic species that contain genetic information in the form of a double strand helix of DNA (Parris et al., 2015; Cannan & Pederson, 2016).