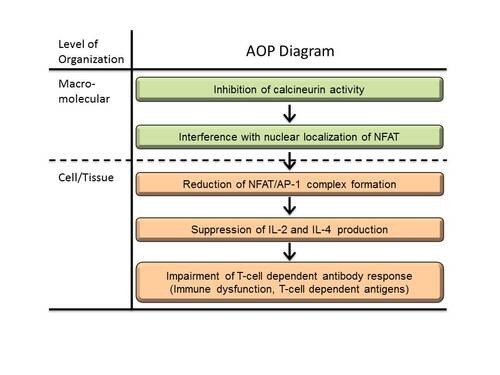 Calcineurin (CN), a protein phosphatase, is known to impair immune function when its phosphatase activation is inhibited. The relationship between CN and immune functions is well understood, and immunosuppressants that work by inhibiting CN have been developed.

CN inhibitors (CNIs) inhibit CN phosphatase activity to suppress many kinds of immune functions and have been used to prevent hyper immune reactions such as rejection and graft versus host disease (GVHD), and treat allergic disorders such as psoriasis and atopic dermatitis. On the other hand, CNIs are reported to induce immunosuppression-derived adverse effects such as increased frequency and/or severity of infections and increased tumor incidences. CNIs might affect kinds of T-cell derived immune functions to induce compromised host. Among the affected immune functions. T-cell dependent antibody response (TDAR) is the important factor to resist infections and thought to be the  useful endpoint on evaluating immunotoxicity of chemicals; therefore, this AOP describes the linkage between the inhibition of CN activity and impairment of TDAR.

CN activity is inhibited when stressors of CNIs bind to CN with their respective immunophilins, which interferes with the nuclear localization of nuclear factor of activated T cells (NFAT), a substrate of CN. As a result, the formation of functional NFAT complexes with activator protein-1 (AP-1) that bind at the site of IL-2, IL-4 and other T cell -derived cytokine promoters is reduced, thereby suppressing production of these cytokines. Among the affected cytokines from each of the helper T cell subsets, reduced production of IL-2 and IL-4 affects the proliferation and differentiation of B-cells to suppress TDAR.

We have identified a number of key events along this pathway and determined the key event relationships, based on which we have created an AOP for inhibition of CN activity leading to impaired TDAR.

Since CN expresses in cells among vast variety of species, this AOP might be applicable to many mammal species, including humans and rodents.

Although there are stressors that inhibit CN activity, this AOP is mainly based on an understanding of immunosuppression caused by FK506 and FKBP12 complexes, on which a significant body of scientific literature has been published.

We look forward to future amendments to this AOP with up-to-date information on other stressors, which will more clarify the linkage between inhibition of CN activity and impairment of TDAR.


Inhibition of CN might induce suppression of cytokines production from all the T helper cell subsets as well as other immune functions of other immune cells. Suppression of cell-mediated immunity is involved in the pharmacology of preventing hyper immune reactions such as rejection and GVHD, and treatment of allergic disorders such as psoriasis and atopic dermatitis. On the other hand, CN inhibition might induce immunosuppression-derived adverse outcomes. One of the effects is increased frequency and/or severity of infections. Compromised host might be related with impairment of multiple immune functions; however, impaired TDAR deems to be usually related. Moreover, TDAR is the frequently used measurable endpoint in immunotoxicity testing according the ICH S8 or US EPA OPPTS 870.7800 immunotoxicity testing guideline. Therefore, the present AOP focus on CN inhibition-induced impairment of TDAR.

CN phosphatase activity is inhibited when stressors bind to Calcineurin-A (CnA) with immunophilins, which interferes with the nuclear localization of NFAT, a substrate of CN. As a result, the formation of functional NFAT/ AP-1 complexes that bind at the site of IL-2 , IL-4 and other cytokine promoters in each of the T helper cell subsets is reduced, thereby suppressing production of these cytokines. Among the affected cytokines TDAR is impaired mainly by the suppression of production of IL-2 and IL-4, which affect the proliferation and differentiation of B-cells to lower TDAR. We have identified a number of key events (KEs) along this pathway, and based on these key event relationships (KERs), created an AOP for inhibition of CN activity leading to impaired TDAR.

Since each KE involving MIE and AO is quantifiable, and shows similar dose responses with the CNIs in vitro, this AOP is useful for understanding immunosuppression due to inhibition of CN activity. In addition, each KER is based on sufficient scientific evidence and exhibits no contradiction with dose responses of adjacent KEs.

Since CN/NFAT system expresses in cells among vast variety of species and the function in immune system is common in at least human and mice, this AOP might be applicable to many mammalian species, including humans and rodents.

The proposed AOP regarding inhibition of CN activity leading to impaired TDAR is not dependent on life stage, sex, or age. Since tacrolimus (FK506) ointment (Protopic) is approved for pediatric atopic dermatitis, the MOA for immunosuppression appears to be applicable to all life stages. The applicable state is considered supported by the draft FDA guidance for immunotoxicology that was recently issued (2020) indicating that “example of immunotoxicology testing could included TDAR assay” to address the concern of immunotoxicity in offspring in juvenile animal studies.

Since FK506 or Cyclosporine A (CsA)-induced outcomes in humans are mimicked by similar responses in a variety of animal models including non-human primates and rodents, immunosuppression induced by inhibition of CN activity is considered to occur across a variety of mammalian species.

In addition to the drugs, it is known that CN activity is suppressed by alkeylbenzene sulfonate (dodecylbenzene sulfonate) extracted from an acrylonitrile butadiene rubber (Ito et al. 2013)., suggesting that the proposed AOP would be applicable to non-pharmacological agents.

For the chemicals such as pesticide, TDAR is also recommended in the US EPA OPPTS 870.7800 immunotoxicity testing guideline.

Essentiality is supported by several knockout animals as follows.

T-cell functions are mainly regulated by the CN-NFAT system and suppression of CN activity in T cells is known to induce multiple types of immunosuppression, including T cell-dependent antibody response (TDAR).

Experiments with T cells indicate that TCR stimulation brings about increases in intracellular concentrations of Ca2+ that trigger CN activity, thereby inducing nuclear localization of substrate NFAT per dephosphorylation. The localized NFAT forms complexes with activator protein 1 (AP-1) at the promoter sites of the T‑cell cytokine genes and induces production of the cytokines.

CN phosphatase activity is known to be inhibited by the formation of immunophilin-CN inhibitor (CNI) complexes, such as CsA/cyclophilin complexes or FK506/FK506-binding protein (FKBP) 12 complexes. Immunophilins are a general class of proteins that exhibit peptidyl-propyl isomerase (PPIase) activity, but there is no commonality between amino-acid sequences of the two classes of immunophilins. The three-dimensional structures of immunophilin complexes are essential to the inhibition of CN phosphatase activity, even though their enzymatic activities are not.

It is also known that one of the effects on immune function when CNI forms complexes with its respective immunophilin and inhibits CN activity is the suppression of IL-2 and other T-cell derived cytokine production. It is further known that inhibition of CN leads to suppression of TDAR because IL‑2 and IL‑4 mainly promote the proliferation, class switching, differentiation, and maturation of B-cells.

Furthermore, CN-NFAT also exists in B‑cells and it has been reported that CNIs do suppress production of certain cytokines from them. At the time of our review of the literature, however, we did not find any reports of a direct effect of CN inhibition on B‑cells, such as changes in proliferation, class switching, differentiation, or maturation of B‑cells.

CN-NFAT system-mediated immunosuppression is well understood based on the pharmacology of some CNI drugs; therefore, AOP of CN inhibition-induced suppression of TDAR is useful for prediction of CN-mediated immunotoxicity.

Based on these findings of empirical support, each KE involving MIE and AO except for KE2 shows similar dose responses to the CNIs in vitro; however, culture time lag is noted, in that, 1 hour for MIE, 2 hours for KE1 and KE2, 22 to 24 hours for KE3 and more than days for AO.

The quantitative relationship between the decreased formation of NFAT/AP-1 complexes and the production of IL2/IL-4 formation induced by CNIs has not been reported.

However, as mentioned in the empirical support, nuclear localization of NFAT is strongly related to NFAT/AP-1 complex formation in the nucleus based on the fact that these two events are detected simultaneously by gel mobility shift assay, and the dose responses of IL2/IL-4 production and nuclear translocation of NFAT inhibited by CNI are similar; therefore, dose ranges of CNI in the inhibitions of IL2/IL-4 production and NFAT/AP-1 complex formation in the nucleus might also be the same.

As for IL-2 and antibody production, in vitro T-cell-induced polyclonal B cell activation to produce antibody was inhibited with anti-IL-2 and anti-IL-2R antibodies. T (Owens T, 1991).

In the human T-B cell co-culture stimulated with anti-CD3 monoclonal antibody, CNIs of FK506 and CsA lowered the levels of T-cell cytokines including IL-2 and IL-4 and inhibited IgM and IgG productions with a dose-dependent manner (Heidt S. 2010).

These results show the quantitative relationships between the inhibition of IL-4 or IL-2 by specific antibodies or CNI and suppression of antibody production.

CN is expressed in T cells as well as other types of immune cells like B cells and dendritic cells. CNIs suppress many kinds of immune functions leading to increased susceptibility to infections and decreased hyper immune reactions such as rejection and GVHD. Among these, TDAR is considered to be the important endpoint of immunotoxicity, because T cells, B cells, and antigen-presenting cells such as dendritic cells are involved in inducing and developing of TDAR. Thus, changes in any of these immune cell populations can influence TDAR.

Moreover, when evaluating the immunotoxicity of pharmaceuticals, the ICH S8 immunotoxicity testing guideline recommends that TDAR be evaluated whenever the target cells of immunotoxicity are not clear based on pharmacology and findings in standard toxicity studies.

As a part of an IATA of immunotoxicology, the present AOP could be used to predict whether or not a compound that potentially acts on T cells could also affect TDAR. On the other hand, it would be inappropriate to use the present AOP alone as an alternative to TDAR measurement in the ICH S8 or US EPA OPPTS 870.7800 immunotoxicity testing guideline.