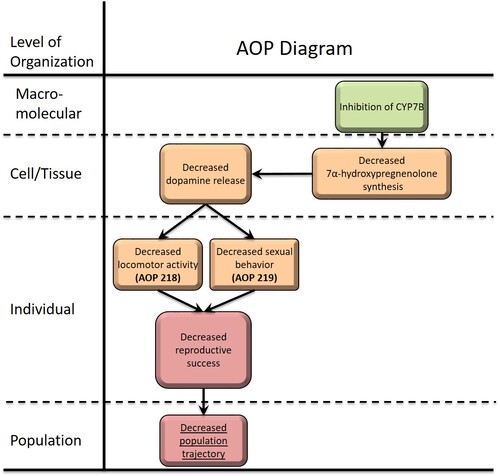 This AOP details the linkage between CYP7B inhibition and decreased sexual behavior that adversely impacts reproductive success. CYP7B is expressed in the brain and catalyzes the conversion of pregnenolone to 7α-hydroxypregnenolone, a neurosteroid that stimulates the release of dopamine in the telencephalon. When released through this pathway, dopamine binds D2 receptor which is involved in induction of sexual behaviors, among other effects. Ketoconazole and other azole fungicides are potent inhibitor of cytochrome P450s, including CYP7B. They bind to the heme site of the enzyme preventing its catalytic activity. When exposed to one of these molecules, 7α-hydroxypregnenolone synthesis decreases which, in turn, reduces dopamine release in the telencephalon and limits sexual behavior. Since sexual behaviors are closely associated to reproductive success, its inhibition negatively affects the fitness of animals.

7α-hydroxypregnenolone was recently discovered and its function and regulation remain unclear. The few studies that focused on this neurosteroid and that were used for this AOP are based on in vitro and in vivo experiments quail and newt. Since the function of this neurosteroid differs in mammals, this AOP is only applicable to non-mammalian vertebrates. It is also limited to male.

Taxons: This AOP is supported with evidence from studies conducted with newt and quail. Based on anticipated conservation of the biology associated with the KEs and KERs described, it is presumed to be applicable to all amphibian and bird.

Previous evidence suggest that this AOP is not applicable to mammal. All the key events of this AOP are described or are biologically plausible in mammal, but the relationship between them might differ, as suggested by Yau et al. (2006).

Sex: This AOP is applicable to male only.

Life Stage: This AOP applies to sexually mature animals since the endpoint is related to reproduction.

Few studies measured multiple key events of this AOP.  For this reason, the evidence for essentiality of the key events is mainly indirect and provided by a series of antagonist/exogenous supplementation experiments. The animal models used for these investigations were newt and quail.

This AOP connects the CYP7B catalyzed synthesis on an important neurosteroid to a well characterized sequence of events. For instance, the involvement of dopamine in sexual behavior that in turn impacts on reproductive success is well described and undisputed (Melis et al., 1995; Hull et al., 2004). What is less characterized is the relation between 7α-hydroxypregnenolone and dopamine release. Since the neurosteroid receptor has yet to be identified, no direct interaction between 7α-hydroxypregnenolone and dopaminergic neuron has been demonstrated. It is thus possible that an intermediate event takes place in between to indirectly connect the neurosteroid to dopamine release.

In terms of structural plausibility, the brain expresses the steroidogenic enzymes required for pregnenolone synthesis, the main substrate of CYP7B. It also expresses CYP7B which synthesizes high concentration of 7α-hydroxypregnenolone in the diencephalon. This region of the brain is populated by neurons projecting into the striatum which is known to express a high quantity of D1- and D2-like dopamine receptor and control motor activity (Orgen S. et al., 1986; Mezey S. et al., 2002; Callier S. et al., 2003).

At present, there are no inconsistencies reported in the literature, but some gaps remain to be filled.

In addition, mammalian CYP7B not only catalyzes the 7α-hydroxylation of pregnenolone but also that of dehydroepiandrosterone (DHEA). Although no clear information reported this enzymatic reaction in the bird, it is plausible that CYP7B catalyzes the hydroxylation of DHEA. Thus, the phenotypic effect of CYP7B inhibition in the brain cannot be uniquely attributed to a depletion in 7α-hydroxypregnenolone. Additionally, ketoconazole is known to inhibit a variety of CYPs, which suggest that animal exposed to it are likely to have several other enzymes inhibited. It is plausible that the impacts of ketoconazole are the result of multiple CYPs inhibition that all converge towards the same phenotype. These off target effects greatly limit the investigations on 7α-hydroxypregnenolone since its concentration cannot be specifically decreased.

If a CYP7B knock-out in the brain was to be performed in an animal species, 7α-hydroxyDHEA supplementation would be required to properly study 7α-hydroxypregnenolone function.

This information is not available for the moment.