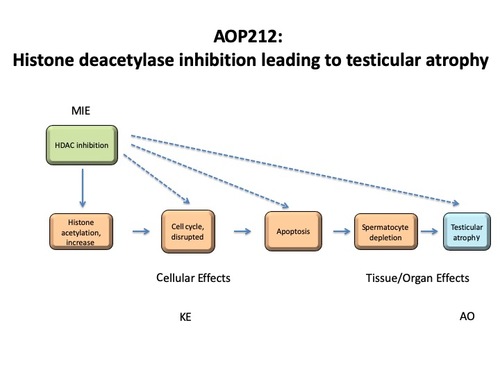 Testicular toxicity is of interest for human health risk assessment especially in terms of reproductive and developmental toxicity, however, the testicular toxicity has not fully elucidated. Histone deacetylase inhibitors (HDIs) are approved as anti-cancer drugs, since HDIs have apoptotic effect in cancer cells. HDIs includes the short chain fatty acids, hydroxamic acids, benzamides and epoxides. The intracellular mechanisms of induction of the spermatocyte apoptosis by HDIs are suggested as histone deacetylase (HDAC) inhibition as MIE, histone acetylation increase, disrupted cell cycle, apoptosis, and spermatocyte depletion as KEs. Adverse outcome has been defined as testicular atrophy. The HDIs inhibit deacetylation of the histone, leading to the increase in histone acetylation. The apoptosis induced by disrupted cell cycle leads to spermatocyte depletion and testis atrophy. This AOP may be one of the pathways induced by HDIs, which suggests the pathway networks of protein hyperacetylations.

The AOP is applicable to the reproductively mature males in rats, mice and humans. The administration route or doses of HDAC inhibitors may affect the intensity of the toxicity.

Biological plausibility, coherence, and consistency of the experimental evidence

The available data supporting the AOP are logic, coherent and consistent with established biological knowledge, whereas there are possibilities for alternative pathways.

There are some other important apoptotic pathways that are involved in cell death, as well as other important spermatocyte signaling or mechanism influences testicular toxicity.

The study in which in vivo administration of trichostatin A (TSA), a HDI, in mice resulted in male meiosis impairment showed the involvement of p53-noxa-caspase-3 apoptotic pathway in TSA-induced spermatocyte apoptosis [Fenic et al., 2008]. Other study showed that MAA induced up-regulation of p21 expression is mediated through histone hyperacetylation and independent of p53/p63/p73 [Parajuli et al., 2014].

The present AOP focuses on p21 pathway leading to apoptosis, however, the alternative pathway such as NF-kappaB signaling pathways may be involved in apoptosis of spermatocytes [Wang et al., 2017].

The present AOP focuses on testicular atrophy by HDAC inhibition-induced apoptosis in spermatocytes, however, the signaling in Setoli cells may be involved in testicular atrophy. Sertoli cell secretes GDNF, FGF2, CXCL12 or Ccl9 molecules, which results in the activation of RET, FGFR, CXCR4 or CCR1 signaling in spermatogonial stem cells, respectively [Chen and Liu, 2015].

Decrease in deoxynucleotide pool by MAA

Spermatocyte may be decreased by necrosis. Cell death mechanism other than apoptosis, such as necrosis, may be considered for spermatocyte depletion.

Temporal concordance among the key events and adverse outcome

Strength, consistency, and specificity of association of adverse outcome and initiating event

The scientific evidence on the linkage between MIE and AO has been described.

The quantitative understanding of the AOP in terms of indirect relations between HDAC inhibition and testicular atrophy was examined in in vivo experiments [Foster et al., 1983; Miller et al., 1982].

Allfrey, V. et al. (1964), "Acetylation and methylation of histones and their possible role in the regulation of RNA synthesis", Proc Natl Acad Sci 51:786-794

Yamazoe, Y. et al. (2015), "Embryo- and testicular-toxicities of methoxyacetate and the related: a review on possible roles of one-carbon transfer and histone modification", Food Safety 3:92-107