This AOP is licensed under a Creative Commons Attribution 4.0 International License.

A descriptive phrase which references both the Molecular Initiating Event and Adverse Outcome.It should take the form “MIE leading to AO”. For example, “Aromatase inhibition leading to reproductive dysfunction” where Aromatase inhibition is the MIE and reproductive dysfunction the AO. In cases where the MIE is unknown or undefined, the earliest known KE in the chain (i.e., furthest upstream) should be used in lieu of the MIE and it should be made clear that the stated event is a KE and not the MIE. More help

A name that succinctly summarises the information from the title. This name should not exceed 90 characters. More help
Decreased testosterone synthesis leading to short AGD 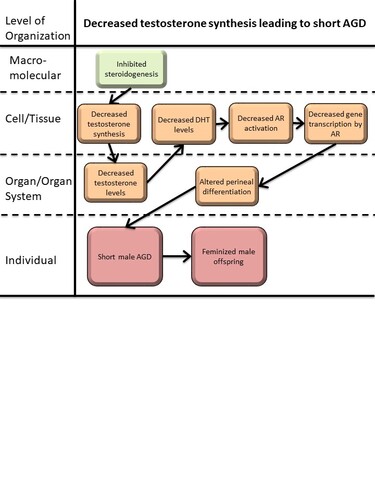 The names and affiliations of the individual(s)/organisation(s) that created/developed the AOP. More help

The user responsible for managing the AOP entry in the AOP-KB and controlling write access to the page by defining the contributors as described in the next section.   More help
Terje Svingen   (email point of contact)

Users with write access to the AOP page.  Entries in this field are controlled by the Point of Contact. More help

Provides users with information concerning how actively the AOP page is being developed, what type of use or input the authors feel comfortable with given the current level of development, and whether it is part of the OECD AOP Development Workplan and has been reviewed and/or endorsed. OECD Status - Tracks the level of review/endorsement the AOP has been subjected to. OECD Project Number - Project number is designated and updated by the OECD. SAAOP Status - Status managed and updated by SAAOP curators. More help

A concise and informative summation of the AOP under development that can stand-alone from the AOP page. The aim is to capture the highlights of the AOP and its potential scientific and regulatory relevance. More help

This AOP links decreased testosterone synthesis by fetal Leydig cells with short anogenital distance (AGD) in male offspring. A short AGD around birth is a marker for feminization of male fetuses and is associated with male reproductive disorders, including reduced fertility in adulthood. Although a short AGD is not necessarily ‘adverse’ from a human health perspective, it is considered an ‘adverse outcome’ in OECD test guidelines; AGD measurements are mandatory in specific tests for developmental and reproductive toxicity in chemical risk assessment (TG 443, TG 421/422, TG 414).

Testosterone is primarily synthesized by fetal Leydig cells of the fetal testes by the process of steroidogenesis. The precursor molecule cholesterol is converted to testosterone via several enzymatic steps and includes for instance key CYP enzymes, CYP11 and CYP17. Following synthesis, testosterone is released into the circulation and transported to target tissues and organs where it initiates masculinization processes. Under normal physiological conditions, testosterone produced by the testicles, is converted in peripheral tissues by 5α-reductase into DHT, which in turn binds AR and activates downstream target genes. AR signaling is necessary for masculinization of the developing fetus, including differentiation of the levator ani/bulbocavernosus (LABC) muscle complex in males. The LABC complex does not develop in the absence, or low levels of, androgen signaling, as in female fetuses.

The key events in this pathway is inhibition of testosterone synthesis in the fetal Leydig cells. In turn, this results in reduced circulating testosterone levels and less DHT (converted by 5α-reductase). Low DHT fails to properly activate AR in target tissues, including  the developing perineal region, which leads to failure to properly masculinize the perineum/LABC complex and ultimately a short AGD.

Used to provide background information for AOP reviewers and users that is considered helpful in understanding the biology underlying the AOP and the motivation for its development.The background should NOT provide an overview of the AOP, its KEs or KERs, which are captured in more detail below. More help

Provides a description of the approaches to the identification, screening and quality assessment of the data relevant to identification of the key events and key event relationships included in the AOP or AOP network.This information is important as a basis to support the objective/envisaged application of the AOP by the regulatory community and to facilitate the reuse of its components.  Suggested content includes a rationale for and description of the scope and focus of the data search and identification strategy/ies including the nature of preliminary scoping and/or expert input, the overall literature screening strategy and more focused literature surveys to identify additional information (including e.g., key search terms, databases and time period searched, any tools used). More help

This section is for information that describes the overall AOP. The information described in section 1 is entered on the upper portion of an AOP page within the AOP-Wiki. This is where some background information may be provided, the structure of the AOP is described, and the KEs and KERs are listed. More help

An MIE is a specialised KE that represents the beginning (point of interaction between a prototypical stressor and the biological system) of an AOP. More help

A measurable event within a specific biological level of organisation. More help

An AO is a specialized KE that represents the end (an adverse outcome of regulatory significance) of an AOP. More help

Relationships Between Two Key Events (Including MIEs and AOs)

This table summarizes all of the KERs of the AOP and is populated in the AOP-Wiki as KERs are added to the AOP.Each table entry acts as a link to the individual KER description page. More help

This network graphic is automatically generated based on the information provided in the MIE(s), KEs, AO(s), KERs and Weight of Evidence (WoE) summary tables. The width of the edges representing the KERs is determined by its WoE confidence level, with thicker lines representing higher degrees of confidence. This network view also shows which KEs are shared with other AOPs. More help

A structured data field that can be used to identify one or more “prototypical” stressors that act through this AOP. Prototypical stressors are stressors for which responses at multiple key events have been well documented. More help

The life stage for which the AOP is known to be applicable. More help

Latin or common names of a species or broader taxonomic grouping (e.g., class, order, family) can be selected.In many cases, individual species identified in these structured fields will be those for which the strongest evidence used in constructing the AOP was available. More help

The sex for which the AOP is known to be applicable. More help

Addressess the relevant biological domain(s) of applicability in terms of sex, life-stage, taxa, and other aspects of biological context. More help

The essentiality of KEs can only be assessed relative to the impact of manipulation of a given KE (e.g., experimentally blocking or exacerbating the event) on the downstream sequence of KEs defined for the AOP. Consequently, evidence supporting essentiality is assembled on the AOP page, rather than on the independent KE pages that are meant to stand-alone as modular units without reference to other KEs in the sequence. The nature of experimental evidence that is relevant to assessing essentiality relates to the impact on downstream KEs and the AO if upstream KEs are prevented or modified. This includes: Direct evidence: directly measured experimental support that blocking or preventing a KE prevents or impacts downstream KEs in the pathway in the expected fashion. Indirect evidence: evidence that modulation or attenuation in the magnitude of impact on a specific KE (increased effect or decreased effect) is associated with corresponding changes (increases or decreases) in the magnitude or frequency of one or more downstream KEs. More help

Addressess the biological plausibility, empirical support, and quantitative understanding from each KER in an AOP. More help

Modulating factors (MFs) may alter the shape of the response-response function that describes the quantitative relationship between two KES, thus having an impact on the progression of the pathway or the severity of the AO.The evidence supporting the influence of various modulating factors is assembled within the individual KERs. More help

Addressess potential applications of an AOP to support regulatory decision-making.This may include, for example, possible utility for test guideline development or refinement, development of integrated testing and assessment approaches, development of (Q)SARs / or chemical profilers to facilitate the grouping of chemicals for subsequent read-across, screening level hazard assessments or even risk assessment. More help

List of the literature that was cited for this AOP. More help