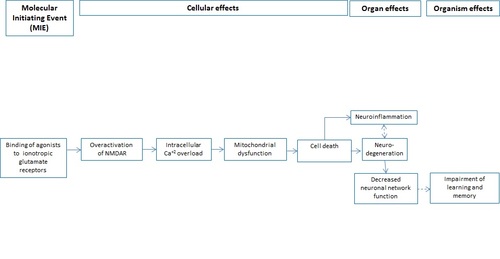 Under physiological conditions activation of glutamate ionotropic receptors such as N-methyl-D-aspartate (NMDARs), alpha-amino-3-hydroxy-5-methyl-4-isoxazolepropionate (AMPARs) and kainate (KARs) is responsible for basal excitatory synaptic transmission and main forms of synaptic plasticity such as long-term potentiation (LTP) and long-term depression (LTD) that are fundamental for learning and memory processes (Schrattenholz and Soskic, 2006). However, sustained (direct or indirect) over-activation of these receptors can induce excitotoxic neuronal cell death. Indeed, mainly increased Ca2+ influx through NMDARs promotes many pathways of toxicity due to generation of free radical species, reduced ATP production, endoplasmic reticulum (ER) stress and protein aggregation. Neuronal injury induced by over-activation of these receptors and the excessive Ca2+ influx is considered an early key event of excitotoxicity. Additionally, the excessive activation of NMDARs has been found to play a significant role in a variety of neurological disorders ranging from acute hypoxic-ischemic brain injury (Barenger et al., 2001) to chronic neurodegenerative diseases (Mehta et al., 2013). The proposed AOP is relevant to adult neurotoxicity testing. A molecular initiating event (MIE) has been defined as a direct binding of agonists to NMDARs or indirect, through prior activation of AMPARs and/or KARs resulting in sustained NMDARs over-activation causing excitotoxic neuronal cell death, mainly in hippocampus and cortex, two brain structures fundamental for learning and memory processes. The AOP is based on the empirical support describing (1) domoic acid (DomA) induced excitotoxicity triggered by indirect (through KARs/AMPARs) NMDARs over-activation leading to impaired learning and memory and (2) glufosinate (GLF) induced excitotoxicity that through direct binding to NMDARs causes convulsions and memory loss (Lanz et al., 2014). GLF is the methylphosphine analog of L-glutamate, used as a component of bactericidal and fungicidal herbicidal. DomA, a natural toxin that accumulates in mussels and shellfish is also an analogue of L-glutamate and among the most prominent features described after human exposure to DomA is memory impairment (Lefebvre and Robertson, 2010). DomA and GLF are described as the examples of the stressors due to large amounts of published data (especially in the case of DomA), however this AOP is relevant to any agonist that directly or indirectly cause NMDARs over-activation. Some of the known agonists selective for the NMDARs are derived from the naturally occurring amino acids such as ibotenic acid, homocysteine and l-aspartate and polyamines like spermidine.


The aim of the present AOP is to construct a linear pathway that captures the KEs and KERs that occur after binding of agonist to NMDA receptor in hippocampal and cortical neurons of adults. The majority of the KEs of the AOP are characterised by MODERATE essentiality for the AO (loss or reduction of cognitive function )or other KEs that follow. The biological plausibility in the majority of KERs is rated STRONG as there is extensive mechanistic understanding. However, the empirical support for the majority of presented KERs cannot be rated high as in most occasions the KEup and KEdown of a KER has not been investigated simultaneously, under the same experimental protocol or not in the suggested brain regions (cortex and hippocampus).

Life Stage Applicability: This AOP is applicable for adults. However, studies exploring the neurotoxic effects of DomA on the developing nervous system demonstrate that DomA can cause neurobehavioral, biochemical and morphological effects similar to the ones observed in adult animals (reviewed in Costa et al., 2010). The DomA doses required to cause these effects in developing organisms are one to two orders of magnitude lower than those needed for loss or reduction of cognitive function in adults. This difference has been attributed to toxicokinetic and/or toxicodynamic particularities that exist between adults and children.

Taxonomic Applicability: The data used to support the KERs in this AOP derives from experimental studies conducted in primates, rats and mice or cell cultures of similar origin as well as from human epidemiological studies or clinical cases of DomA poisoning. The majority of the KEs in this AOP seem to be highly conserved across species. It remains to be proved if these KERs of the present AOP are also applicable for other species rather than human, primates, rats or mice. Increasing evidence from sea lions exposed to DomA further supports some of the KERs of the present AOP.

Sex Applicability: The majority of the studies addressing the KEs and KERs of this AOP have been carried out mainly in male laboratory animals. Few studies are available in females and some of them compare the effects between females and males. It appears that this AOP is applicable for both females and males.

1) Essentiality of KE "NMDARs, Overactivation" for the KE "Cell death" is MODERATE. NMDARs play a central role in excitotoxic neuronal injury. Over-activation of these receptors causes disruption of Ca2+ homeostasis that through mitochondrial dysfunction triggers signals leading to apoptotic or necrotic death. However, the ways that cells respond to mitochondrial injury vary and often are considered unclear and controversial (Pivovarova and Andrews, 2010). However, NMDAR antagonists failed to reverse these Ca2+ induced cell deaths, leading to suggestions that NMDAR-independent pathways that involve α-amino-3-hydroxy-5-methyl-4-isoxazolepropionic acid receptors (AMPARs), acid-sensing channels and transient receptor potential channels might be also responsible for excitotoxic neuronal injury (Pivovarova and Andrews, 2010). Several agonists have higher affinity than NMDA itself but are not relevant for behavioural studies as NMDA activation leads to epilepsy and cell death, a common approach to induce neurotoxic lesions.

2) Essentiality of KE "Calcium influx, Increased" for the KE "Cell death" is MODERATE. Ca2+ plays important role in excitotoxicity but the mechanisms involved in excitotoxic cell death are still debated (Berliocchi et al., 2005). Depending on the extent and the duration of the Ca2+ influx, neurons survive, die through apoptotic mechanisms in case of sustained slow Ca2+ influx, or undergo necrosis when rapid high Ca2+ influx occurs. Over-expression of the endogenous calpain inhibitor, calpastatin, or the calpain-resistant isoform the Na+/Ca2+ exchanger 2 (NCX2) prevents Ca2+ overload and protects neurons from excitotoxicity (Bano et al., 2005).

3) Essentiality of KE "Mitochondria dysfunction" for the AO "Impairment of learning and memory" is STRONG. ROS is known to have a negative effect on synaptic plasticity and learning and memory (reviewed in Lynch, 2004). H2O2 inhibits LTP both in vitro and in vivo, which is associated with increased ROS. A negative correlation has been found between ROS concentration in hippocampus and ability of rats to sustain LTP. Administration of antioxidants, vitamins E and C, reverses the inhibitory effects of stress on LTP and prevents the increase of ROS in hippocampus. In transgenic mice that overexpress superoxide dismutase (SOD), the enzyme which catalyzes the conversion of superoxide to H2O2, the LTP in CA1 is inhibited. Intracerebroventricular injection of H2O2, at a concentration which increases ROS levels in hippocampus, impairs LTP that is prevented after pretreatment with the antioxidant phenylarsine oxide. Knocking down Forkhead box protein O1 (FoxO1) in mice, which is an important regulator of mitochondrial function, reverses mitochondrial abnormalities and cognitive impairment induced by DA in mice (Wu et al., 2013).

4) Essentiality of KE "Mitochondria dysfunction" for the KE "Cell death" is MODERATE. There is a considerable number of mitochondrial associated processes that lead to necrotic or apoptotic cell death such as uncoupling of oxidative phosphorylation, activation of the mitochondrial permeability transition pore (MPTP), release of pro-apoptotic proteins, activation of poly(ADP-ribose) polymerase-1 and proteases such as calpain, increased levels of and delayed Ca2+ de-regulation (Pivovarova and Andrews, 2010). Although the understanding of these mechanisms is clearly established, the cascade of events and the significance of them are less clear (Pivovarova and Andrews, 2010). A significant body of evidence, both clinical and experimental, supports a role for the mitochondrial permeability transition pore in excitotoxicity (reviewed in Pivovarova and Andrews, 2010). However, the effects of cyclosporin A, the classical MPTP inhibitor, on neuronal mitochondria are inconsistent raising doubts about its role in neural cell death. However, ADP/ATP translocator deficiency, which is not essential for MPTP but does regulate pore opening, protects neurons against excitotoxicity. Furthermore, MPTP opening renders neurons vulnerable to excitotoxicity.

The table provides a summary of the biological plausibility and the empirical support for each KER described in this AOP based on "Annex 1: Guidance for assessing relative level of confidence in the overall AOP based on rank ordered elements" found in the User's Handbook.

More information about the evidence that support these KERs and the relevant literature can be found in each KER description.

The main base for the overall scoring is that the empirical support coming from the experiments with one stressor (domoic acid, DomA). However this AOP is not specific for DomA, it is applicable to any chemicals that act as NMDARs agonists.

Exposure to xenobiotics can potentially affect the nervous system resulting in neurobehavioral alterations and/or neurological clinical symptoms. To assess the neurotoxic properties of compounds, current testing largely relies on neurobehavioural tests in laboratory animals, histopathological analysis, neurochemical and occasionally electrophysiological observations. Throughout the years, a significant number of methods have been developed to assess neurobehaviour in laboratory animals and a comprehensive summary of them can be found in OECD Series on testing and assessment, number 20, Guidance Document for Neurotoxicity Testing (2004). This document is considered an essential supplement to a substantial number of already existing OECD Test Guidelines that are applied to gain information on the neurotoxicity properties of chemical compounds. Namely, these are: general Test Guidelines such as single dose toxicity (e.g. OECD 402, 403, 420, 423 and 425), repeated dose toxicity (e.g. OECD 407 and 408), chronic exposure (e.g. OECD 452) as well as Test Guidelines specifically developed for the study of neurotoxicity in adult laboratory animals, such as OECD Test Guideline for Neurotoxicity (424).

The present AOP can potentially provide the basis for development of a mechanistically informed IATA for neurotoxicity. The construction of IATA for predicting neurotoxic effects in adults is expected to make use of more than one AOP within an interconnected network in order to take into consideration all critical biological processes that may contribute to impairment of learning and memory in adults. Through this network, identification of KEs and KERs common across multiple AOPs can emerge that should be considered during IATA construction and that may inform also in vitro assay development. The development of alternative assays would allow screening of chemicals for potential NMDAR activators and reducing the use of in vivo studies.

Results from assays based on the KEs of this AOP can serve to interpret and accept results that derive from non-standard test methods. Omics data from toxicogenomic, transcriptomic, proteomic, and metabolomic studies can be interpreted in a structured way using this AOP that is relevant to adult neurotoxicity. Currently learning and memory testing is not required by the OECD TG 424. This AOP could serve as a base for chemical evaluation with potential to cause impairment of learning and memory. The assay development would refer to the identified in this AOP KEs that could form a testing strategy for identifying chemicals with potential to cause cognitive deficit. Finally, this AOP could provide the opportunity to group chemicals using not only chemical properties but also mechanistic information that can later inform data gap filling by read-across and predict neurotoxic properties of a target substance.