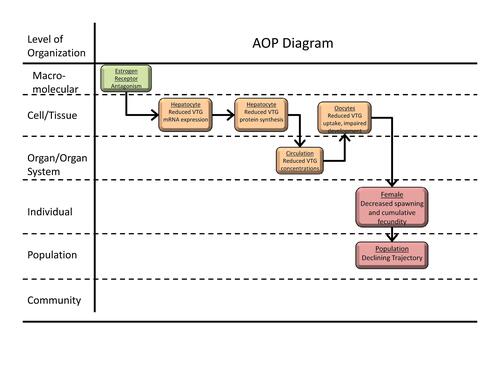 This adverse outcome pathway details the linkage between antagonism of estrogen receptor in females and the adverse effect of reduced cumulative fecundity in repeat-spawning fish species. Cumulative fecundity is the most apical endpoint considered in the OECD 229 Fish Short Term Reproduction Assay. The OECD 229 assay serves as screening assay for endocrine disruption and associated reproductive impairment (OECD 2012a). Cumulative fecundity is one of several variables known to be of demographic significance in forecasting fish population trends. Therefore, this AOP has utility in supporting the application of measures of ER antagonism, or in silico predictions of the ability to antagonize ER as a means to identify chemicals with known potential to adversely affect fish populations.

The weight of evidence for each of the KERs comprising the AOP are ranked moderate to strong. Biological plausibility at the molecular and cellular level of the early key events is very strong. Some uncertainties regarding the mechanistic details of the connection between reduced vtg availability and uptake limit the strength of evidence to some degree. However, there are considerable evidence to support the idea that ER antagonism can ultimately lead to reproductive failure. Overall weight of evidence is moderate.