Hepatic uroporphyria is a disorder where the disturbance of heme biosynthesis results in accumulation and excretion of uroporphyrin, heptacarboxyl- and hexacarboxyl porphyrin: collectively referred to as highly carboxylated porphyrins (HCPs)[1][2][3]. The disorder is due to a homozygous mutation in uroporphyrinogen decarboxylase (UROD), an enzyme involved in the heme biosynthesis pathway [4], or may be chemically induced, which involves the inhibition of UROD. This adverse outcome pathway (AOP) describes the linkages leading to chemically induced porphyria through the activation of the aryl hydrocarbon receptor (AHR), a ligand-activated transcription factor.  AHR activation leads to the induction of cytochrome P450 1A2, a phase I metabolizing enzyme, which in turn results in excessive oxidation of uroporphyrinogen.  This oxidation produces a UROD inhibitor, preventing the conversion of uroporphyrinogen to coprouroporphyrinogen and increasing the synthesis of the UROD inhibitor in a positive feedback loop. The accumulation of uroporphyrinogen leads to its preferential oxidation and accumulation of HCP in various organs (Uroporphyria).  This AOP was developed in accordance with OECD guidelines and demonstrates a high degree of confidence as a qualitative AOP. The quantitative understanding of this AOP however is not yet complete, preventing the accurate prediction of uroporphyria from lower level key events.

Heme is a cyclic tetrapyrrole cofactor containing Fe2+ porphyrin-containing ferroprotein that forms various hemoproteins such as hemoglobin, cytochromes and catalases [62]. Its biosynthesis mostly occurs in the liver and involves 8 separate steps. Porphyria is a disorder in which the disturbance of any of the steps of heme biosynthesis results in accumulation and excretion of porphyrins[2]. A variety of porphyrias exist depending on which enzyme in the pathway is deficient. This AOP describes a situation in which the 5th step of heme biosynthesis, uroporphyrinogen decarboxylase (UROD), which converts uroporphyrinogen to coproporphyrinogen, is inhibited.

Hepatic uroporphyria is viewed somewhat differently by clinicians and toxicologists. For the former it is mostly a sporadic disease (porphyria cutanea tarda; PCT) occurring sometimes in patients exposed to a variety of insults such as alcohol, estrogens, hepatitis viruses, HIV and on dialysis. Importantly, very early on it was found that lowering body iron stores by bleeding or now chelators causes remission [61]. In some northern European and US patients, carrying the hemochromatosis mutation is a risk factor but in other patients other iron susceptibility genes may contribute. Carrying a UROD mutation (lowering activity) is also a risk factor but still dependent on other susceptibility factors to see porphyria. To reproduce these findings experimentally has proved challenging but now possible. For toxicologists hepatic uroporphyria has mostly been seen as a toxic, but unique and curious endpoint of polychlorinated ligands of the AHR.  Experimentally, TCDD in mice is the most potent agent consistent with AHR mode of action but is more difficult in rats and other organisms. Hexachlorobenzene (HCB) has been greatly studied for its porphyria-inducing abilities and a large incident of porphyria in some young people in Turkey 60 years ago was ascribed to susceptible individuals who had consumed HCB. It is controversial whether HCB is a weak AHR ligand. Evidence of porphyria in people exposed accidentally or occupationally to accepted AHR ligands such as TCDD and PCBs is thin. Importantly, iron status can profoundly modify experimental uroporphyria induced by these chemicals especially in mice. In fact iron overload alone of mice will eventually produce a strong hepatic uroporphyria which is markedly genetically determined and toxicity can be ameliorated by chelators resembling PCT. Thus hepatic porphyria could alternatively be viewed as an iron AOP. At an overall level hepatic uroporphyria in animals and patients is the outcome of complex genetic traits and external stimuli in which in some traditional toxicological circumstances binding of a chemical to the AHR may have a major contribution[67] but in others may not.


Overall, this AOP can most accurately be applied to mammalian species past the embryonic and infant stage of development.  It is also representative of a solid toxicity pathway in avian species, however the contribution of the defining key event (UROD inhibition) is not as well understood; it is not as dramatically and consistently inhibited as it is with mammals.  There is minimal evidence supporting the applicability of this AOP in fish, and none in alternate species.  Details and supporting evidences are summarized below.

Life Stage Applicability: Uroporphyria occurs following chemical exposure in juvenile or adult individuals. Fetal exposure to dioxin-like compounds causes developmental abnormalities and embryolethality rather than HCP accumulation[15][16][17][18][19]. Turkish children under the age of two that were exposed to HCB through breastmilk passed away from a condition called "pink sore”[20].

Taxonomic Applicability: Although the AHR is highly conserved in evolution[21], chemical-induced uroporphyria has only been detected in birds[1][2][3] and mammals[22] , including an accidental outbreak in humans due to hexachlorobenzen-contaminated grain in the 1950s[20]. Fish are less susceptible to chemical-induced uroporphyria, but elevated levels of HCP have been documented in highly contaminated environments[23].

Sex Applicability: Although this AOP applies broadly to both males and females, sexual dimorphism for uroporphyria has been observed in rats exposed to hexachlorobenzene (HCB). Hepatic uroporphyrin III was markedly increased in female rats exposed to HCB whereas exposed males showed levels of hepatic porphyrins similar to controls[24].

Molecular Initiating Event Summary, Key Event Summary
Provide an overall assessment of the essentiality for the key events in the AOP. Support calls for individual key events can be included in the molecular initiating event, key event, and adverse outcome tables above.

Every Key event in this AOP is absolutely essential for downstream events to occur. A summary of evidence for essentiality of each key event is given below.

It should be noted that a recent study by Davies et al.[25] found that both C57BL/6J mice (susceptible to chemical-induced porphyria) and DBA/2 mice (resistant to porphyria due to polymorphism in AHR gene) showed increased expression of CYP1A2 when exposed to TCDD, even though the DBA/2 strain did not develop porphyria. Furthermore AHR-/- mice showed a mild uroporphyric response in the presence of iron loading and 5-aminolevulinic acid (a heme precursor). These findings suggest that the induction of CYP1A2 is not crucial for chemical-induced porphyria, but a basal level of expression is absolutely essential.

Table 3 shows a sampling of the literature that demonstrates changes in KEs at multiple levels of organization leading to uroporphyria. The use of animal models resistant to porphyria (low AHR affinity or AHR/CYP1A2 knockout) illustrates the essentiality of these KEs in for downstream effects. 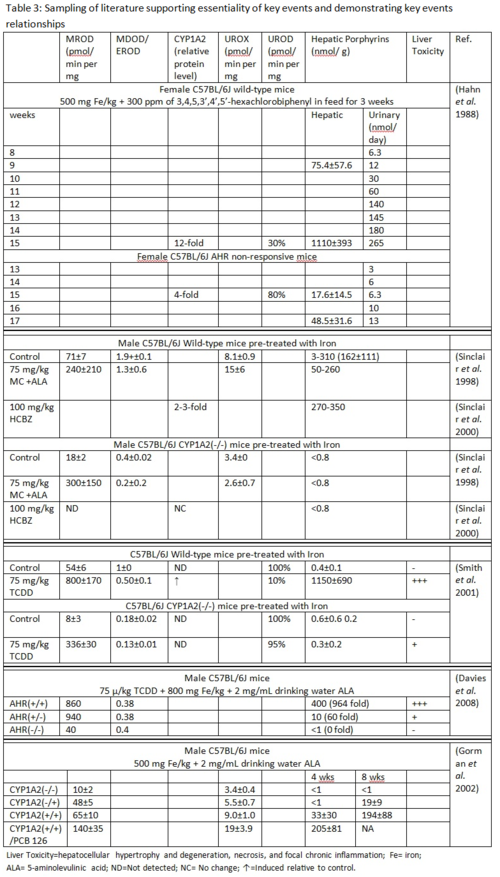 CYPs other than CYP1A2 are able of catalyzing uroporphyrinogen oxidation, raising doubts on the essentiality of CYP1A2 for this pathway. For instance, Phillips et al.[35] were able to generate mild uroporphyria in a Cyp1A2-/- mouse model that is genetically predisposed (Hfe-/-, Urod-/+) to develop porphyria.

The essentiality of CYP1A2 induction in human porphyria cutanea tarda is unclear. UROX activity in human liver microsomes was not correlated with CYP1A2 content[66]. Furthermore, there is contradictory evidence regarding the association between CYP1A2 polymorphism and susceptibility to porphyria cutanea tarda [63-64]. It may be possible that in patients with a genetic variation in UROD causing an inherent reduction in activity, the activity of CYP1A2 is less important.

UROD inhibition is not always observed and/or is less pronounced in avian models of porphyria, mainly in quail [47]. It is suggested that a mechanism other than UROD inhibition explain the extent of porphyrin accumulation in birds. Therefore, the applicability of this AOP to avian remains uncertain.

The characterization of the UROD inhibitor isolated by Phillips [38] has been criticized by Danton[66]. Therefore, UROD inhibitor has yet to be identified.

AhR binding stressors under certain conditions do not lead to adverse effect in particular mammalian strains[25].

Summary Table
Provide an overall discussion of the quantitative information available for this AOP. Support calls for the individual relationships can be included in the Key Event Relationship table above.

The overall quantitative understanding of this AOP is moderate for mammals and poor for alternate species. Quantitative models have been developed that predict the AHR transactivation potential of various compounds [55][56][57], but the extent of AHR activation necessary to produce porphyria is not known. It has been established that a reduction in UROD activity of at least 70% is required to lead to overt uroporphyrin in mammals[58][24][54]. Additionally, numerous in vitro systems have been developed to study porphyrin accumulation and UROD inhibition simultaneously; therefore, this KER provides the most feasible target for a predictive, quantitative model. However, care must be taken when reading across to other species; UROD inhibition is not always observed in avian models of porphyria, and when it is, it is less pronounced[59][60][47].

This AOP was developed with the intended purpose of chemical screening as well as ecological risk assessment.  There are numerous in vitro assays for each key event up to the level of UROD activity.  There is sufficient evidence that a 70% inhibition of UROD activity significantly increases the risk of developing uroporphyria in mammals, making it a promising target assay in the battery of chemical screening tools.   Furthermore, there has recently been significant advances in the understanding of differences in avian sensitivity to AHR agonists, and a similar effort is underway for fish.  Sequencing the AHR ligand binding domain of any bird species (and potentially fish species) allows for its classification as low, medium or high sensitivity, which aids in the chemical risk assessment of DLCs and other AHR agonists.  There is also potential use for this AOP in risk management, as minimum allowable environmental levels can be customized to the sensitivity of the native species in the area under consideration.