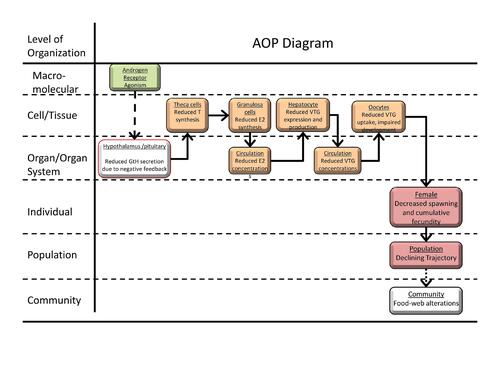 This adverse outcome pathway details the linkage between binding and activation of androgen receptor as a nuclear transcription factor in females and reproductive dysfunction as evidenced through reductions cumulative fecundity and spawning in repeat-spawning fish species.  Androgen receptor mediated activities are one of the major activities of concern to endocrine disruptor screening programs worldwide.  Cumulative fecundity is the most apical endpoint considered in the OECD 229 Fish Short Term Reproduction Assay. The OECD 229 assay serves as screening assay for endocrine disruption and associated reproductive impairment (OECD 2012). Cumulative fecundity is one of several variables known to be of demographic significance in forecasting fish population trends. Therefore, this AOP has utility in supporting the application of measures of androgen receptor binding and activation as a nuclear transcription factor as a means to identify chemicals with known potential to adversely affect fish populations. At present this AOP is largely supported by evidence conducted with small laboratory model fish species such as Pimephales promelas, Oryzias latipes, and Fundulus heteroclitus. While many aspects of the biology underlying this AOP are largely conserved across vertebrates, particularly oviparous vertebrates, the relevance of this AOP to vertebrate classes other than fish as well as to fish species employing different reproductive strategies has not been established at this time. Thus, caution should be used in applying this AOP beyond a fairly narrow range of fish species with life cycles similar to that of the three species noted above.


Annex 1 Table, Assessment of the relative level of confidence in the overall AOP based on rank ordered weight of evidence elements is attached in PDF format.

Chemical: This AOP applies to non-aromatizable androgens. Compounds which can bind the AR in vitro, but are converted to high potency estrogens in vivo through aromatization do not produce the profile of effects described in the present AOP (e.g., methyltestosterone [Ankley et al. 2001; Pawlowski et al. 2004]; androstenedione [OECD 2007]).

Sex: The AOP applies to females only.

Life stages: The relevant life stages for this AOP are reproductively mature adults. This AOP does not apply to adult stages that lack a sexually mature ovary, for example as a result of seasonal or environmentally-induced gonadal senescence (i.e., through control of temperature, photo-period, etc. in a laboratory setting).

Taxonomic: At present, the assumed taxonomic applicability domain of this AOP is iteroparous teleost fish species.

[Assessment provided by Ioanna Katsiadaki - reviewer]:  This is restricted clearly to female fish only as adversity is linked to reduced oestrogen synthesis (via reduced androgen synthesis); it is also limited to fully reproductive mature fish (not fish entering puberty or juvenile fish) and importantly is limited to fish that once they reach sexual maturity they spawn constantly. The latter is a reproductive strategy employed by fish that tend to occupy tropical areas (around the equator). Unfortunately most fish species have different reproductive strategies (annual life cycle) hence the level of gonadotropin expression (and consequently steroid production) is regulated by photoperiodic and temperature changes throughout the year. Even if a negative feedback mechanism operates in all of these species and in all life stages (which is certainly not the case) we still need to establish what is the relative strength of the AR agonist induced negative feedback to the environment-induced stimulation of gonadotropins! This link has never been studied and is critical if we really mean to protect wildlife.

There are a limited number of studies in which multiple key events were considered in the same study following exposure to known, non-aromatizable, AR agonists. These were considered the most useful for evaluating the concordance of dose-response relationships. In general, effects on downstream key events occurred at concentrations equal to or greater than those at which upstream events occurred. For exposures to 17b-trenbolone, key events related to steroid production and circulating estradiol and vitellogenin concentrations were impacted at the same dose at which effects on cumulative fecundity were observed. Effects on vitellogenin transcription were only observed at greater concentrations, but data for comparable species and dose ranges were unavailable at present. For two other AR agonists tested in fish, available studies examined a single time-point only. Consequently, it was unclear whether lower effect concentrations for certain downstream KEs, relative to upstream were due to a lack of dose-response concordance, or due to decreased sensitivity of the upstream later in the exposure time-course.

While not directly addressing dose-response concordance, the dependence of the key events on the concentration of the androgen agonist has been established for all key events starting at and down-stream of reduced T synthesis. However, to date we are not aware of any studies that have established a concentration-response relationship between exposure to non-endogenous AR agonists (e.g., xenobiotics, pharmaceuticals) and circulating gonadotropin concentrations in fish or other vertebrates.

Temporal concordance among the key events and adverse effect: Temporal concordance between activation of the AR as a nuclear transcription factor and onset of a negative feedback response resulting in decreased gonadotropin secretion has not been established. Temporal concordance of the key events starting with reduced T biosynthesis and proceeding through reductions in plasma vitellogenin has been established (Concordance Table). Temporal concordance beyond the key event of reductions in plasma vitellogenin has not been established, in large part due to disconnect in the time-scales over which the events can be measured. For example, most small fish used in reproductive toxicity testing can spawn anywhere from once daily to several days per week. Given the variability in daily spawning rates, it is neither practical nor effective to evaluate cumulative fecundity at a time scale shorter than roughly a week. Since the impacts at lower levels of biological organization can be detected within hours of exposure, lack of impact on cumulative fecundity before the other key events are impacted cannot be effectively measured. Overall, among those key events whose temporal concordance can reasonably be evaluated based on currently available data, the temporal profile observed is consistent with the AOP.

Consistency: We are aware of no cases where the pattern of key events described was observed without also observing a significant impact on cumulative fecundity. Due to variability in the cumulative fecundity endpoint and potential compensatory responses ((Villeneuve et al. 2009; Villeneuve et al. 2013; Ankley et al. 2009b; Zhang et al. 2008; Ekman et al. 2012), the cumulative fecundity endpoint can be less sensitive than key events measured at lower levels of biological organization. Nonetheless, the occurrence of the final adverse outcome when the other key events are observed is very consistent. The final adverse effect is not specific to this AOP. Many of the key events included in this AOP overlap with AOPs linking other molecular initiating events to reproductive dysfunction in small fish.

Uncertainties, inconsistencies, and data gaps: There are three major areas of uncertainty and data gaps in the current AOP:

Assessment of quantitative understanding of the AOP: At present, the quantitative understanding of the AOP is insufficient to directly link a measure of chemical potency as an AR agonist (e.g., as measured in a transcriptional activation assay) to a predicted effect concentration at the level of cumulative fecundity. However, a number of mechanistic and statistical models are sufficiently developed to facilitate predictions of cumulative outcomes based on intermediate key event measurements such as circulating vitellogenin concentrations. Because the current models were developed based on a fairly limited range of model compounds and species, the general applicability and degree of accuracy and precision in the model-derived predictions remains uncertain.